If you love regular Doritos, you have probably been missing out on the experience of enjoying 3D Doritos chips. These were not a long-lived PepsiCo product, but they were very popular with some people during their short lifespan. The original product was essentially puffy Doritos, but during this snacking period of Lunchables and other kinds of kid-friendly snacks, this was right on brand.

If you missed out on the original product, you are in luck because the 3D Doritos lineup was recently rebooted and improved. You can try this unique Doritos product for the first time due to the reboot, and you will be able to see what all the hubbub was about in the late 90s. The new product has been improved to be crunchier, and the original ridged texture has been eliminated, which has been a big benefit to the rebooted chips.

The original 3D Doritos was made from 1998 to the early 2000s. The original varieties were jalapeno cheddar, nacho cheese, and zesty ranch. It is likely that the product was created since Doritos had expanded into so many other flavor offerings already and might have thought that they had run out of flavor ideas.

The original product was puffy and had ridges on it. This was sort of like a ridged potato chip made to be puffy and covered in Doritos flavor powder. This wasn’t that unique of an idea, but Doritos was already leading the way with flavor options and this was intended to be a new version of the same Doritos products that were so popular already. Candidly, this might have been a little lazy of Doritos. They might have thought that all they needed to do was make the same chips but with ridges and some air puffed into them to generate a new big hit.

Unfortunately, the product was not as popular as was hoped, and the original product only made it through a few years of sales. However, loyal fans almost immediately started writing letters to PepsiCo asking for the product to return. These letters were answered with apologies about how not every popular snack could be sold long term. Committed fans were almost offended that the product was pulled and then that there was no explanation given for why and no answers about if it would be brought back.

The 3D version of Doritos remained popular enough in Mexico that they stayed on sale even after they were pulled from shelves in the US. There was a queso flavor that was the most popular in Mexico that could be found in many places. There were also some bags of these chips sold on eBay during the years that they were not being offered by PepsiCo for sale. The unique color and design of the bags that came from Mexico were obvious right off when you were trying to decide where the chips had been sourced from.

The reboot of the fan-favorite is said to promise new flavors and improved texture. The first flavors that were released were Chili Cheese Nacho and Spicy Ranch. The chips are sold in 2-ounce bags and 6-ounce bags. PepsiCo has stated that this is the most anticipated product release that they have managed in years. This might mean that the reboot will make it for the long haul in the way that the original product didn’t.

The new version of this product is actually called 3D Doritos Crunch. The focus of the texture is about the crunchy nature of it more than the puffy texture of the chips. Puffy chips are not at all unusual these days, and crunchy is more important in the modern chip market.

Doritos kicked off the relaunch by partnering with Ali Landry. This was hot on the heels of her appearance in a Super Bowl commercial and made perfect sense for the snack space to try and get attention on a new product. Doritos have also leveraged TikTok and other social media resources to really sell the products.

This product was mentioned heavily in social media well before the launch to help make it clear that it was really coming back. This campaign worked really well, and discussion about the reboot was everywhere on Reddit and other snacking blogs as well as social media and TikTok. Frito-Lay is now the company that is responsible for the comeback, and they have always been excellent at promotion.

This is very much the result of a passion campaign that was waged by the fans, and everyone who loved the original products will be so happy that Frito-Lay has not changed the original idea too much.

The bags and advertising materials for this reboot were intended to match the previous marketing campaign so that super fans would immediately recognize them. The new bags and advertising materials have the same geometric and brightly-colored backgrounds as the original bags. The color of the bags is coded for the flavor, so the Spicy Ranch is blue, and the Chili Cheese Nacho is red. The 3D label is the biggest thing on the bag so that it is clear that these are the kind of chips that you have bought.

The Doritos logo is even smaller than the 3D label on the bag. The word “crunch” is right under the main part of the logo. The product itself is shown on the bottom of the bag as well. The original bags showed the ridges in the chips that were a big part of what they were advertising for the first time around. The background of the new bags is white, which helps to make them look different than the other Doritos flavors that are on the market today.

The Mexican version of the product was sold in yellow bags with the Doritos logo on it and images of the product. This was a much more straightforward and simpler bag than the US version, but the bright yellow of the bag is really distinctive.

Where to Buy 3D Doritos

You can buy 3D Doritos online from sources like Amazon, and you can get them directly from Frito-Lay as well. Walmart also sells the 3D version of Doritos, and so does Target. This makes it easy to track the chips down in your area, and since you can buy them online, you won’t have any trouble getting access to them.

Trying this version of the 3D Doritos products will be so much easier than it would have been the first time around. Frito-Lay has also made sure that the product was given a full launch and that it will not be halfway supported with marketing like the first go-around. For all of the fans that loved the original products, this is great news since it makes it much more likely that their favorite Doritos will not go right back to being removed from shelves and mothballed. 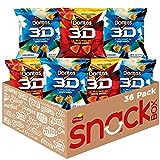 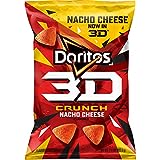 From the Doritos website for the Chili Cheese Nacho variety:

This is not a vegan product because there are cheese and milk products in the chips. Each variety of the chips will have the same basic ingredients, which do include milk products.

The most famous 3D Doritos ad was the Super Bowl ad where Matthew McConaughey was turned into a 2D version of himself. This hilarious campaign was really popular, and there were spin-off ads that were run after the Super Bowl using the same story arc. McConaughey even appears on Jimmy Kimmel’s show in the ad and struggles to sit in a chair and do normal activities as his 2D self.

This clever ad is probably the most memorable Frito-Lay ad in a long time, and it did bring a lot of attention to the products, which were already on shelves at this time. If you did not see this amazing ad, you could check it out in the links below. Hopefully, Frito-Lay will continue to come up with really fun ads like this as they roll out more flavors of the 3D version of their classic chips.

Super Bowl ad for the reboot:

An ad complete with famous comedians and actors:

When did 3D Doritos come out?