Everyone loves a crunchy, salty snack every now and then. Some of us turn to things like popcorn, crackers, or pretzels. Some of us love chips or even chips and dips. The beauty of it is there are so many different options out there for those snacks.

One timeless classic that people seem to love are Bugles Chips. These are not your average chip. They are unique in shape and style but they definitely fit the category for crunchy, salty, and tastefully delicious as well.

Bugles chips are best described as corn chips. They aren’t like any other chip out there though. Where a lot of potato chips are formed into triangles or rounds, Bugles are not. Where other chip brands are these strips of chips that are sometimes slightly curled, these are not!

Bugles chips are instead crafted into Bugle shapes, in a way. They are small cones crafted out of the corn chip materials used for this particular chip option. It’s the perfect snack and is often described as a corn snack rather than a corn chip.

These fun chips are produced by a company named Tom’s Snacks. Tom’s Snacks is licensed to produce the chips under the General Mills Company. The chips have been around since 1965, when Verne E Weiss developed them in Plymouth, Minnesota.

Verne was a food engineer that came up with this idea. They started out Bugles with just a testing market in the local area. That was in 1965. It didn’t take long for them to decide to go all out and make Bugles available throughout the whole United States in 1966.

At that time, General Mills actually released several new snacks and munching foods. You might recognize things like Pizza Spins, Daisies, Whistles, Buttons, and Bows. All of these were introduced nationally at the same time as Bugles. But today, Bugles are the only one that remains in operation. The others only lasted a few years and were discontinued before 1979.

While Mr. Weiss was from Minnesota, that is not where the creation of Bugles took place. These chips were produced in Chicago, Illinois for many years. That original plant closed town in 2017. However, before that time, they had begun some production of Bugles and other snacks in an Ohio plant back in the 1980s and that is where these chips are produced now.

Bugles are unique in flavor and design. One of the neat things about them is that they were never fried in hydrogenated oils like many other chips are. Instead, they were fried in coconut oil. There aren’t a lot of ingredients either. The original flavor primarily consists of corn meal, coconut oil, sugar, salt, baking soda, and BHT.

There are some other flavors out there on the market so the ingredients in different flavors could vary some as well. We will talk about flavors shortly.

Throughout the history of Bugles chips, they have made their ways into several other countries as well. In some countries, they are sold under different names. For example, the United States, Canada, China, Denmark, Iraq, and The Netherlands all know these chips as Bugles.

These aren’t the only countries that sell them though. They are distributed by other companies and sometimes titled differently. They can be found in some of these countries in addition to the ones we already listed.

That’s a vast reach for this simple corn snack!

When Were Bugles Chips Invented?

Originally, Bugles were first invented in 1965. At that time, they were only produced to a very small target market. We don’t know the specifics of the target market but we know that it was fairly small and used to determine whether the chips would go over well.

That test market was short-lived and within a year the company decided to make Bugles national available. They first went into full production starting in 1966 and they’ve been around every since. That’s more than 55 years on the market as Bugles.

Bugles have since been made available internationally as well and can be found in a multitude of countries outside of the United States. They’ve never been discontinued or even sold, although the current producer is licensed under the owner of the brand, rather than being of the brand.

General Mills is the official owner of Bugles chips. From what we can tell, General Mills has always owned the name and brand. The person who created Bugles was a food engineer and while we have his name (Verne Weiss), we don’t really have any details that tell us whether he was employed with General Mills or later took the recipe there.

While General Mills is the official owner of Bugles chips, the producer falls to a company known as Tom’s Snacks. There is no branding for this company on the chips. They are simply licensed to help produce and manufacture the product.

How Did Bugles Get Their Name?

Once again, we don’t get a lot of back story as to just why Bugles chips were named as such. However, we do know that when Bugles were presented to the market, General Mills actually produced several different snack foods.

All of those foods were named after the items they resembled. For example, Daisies were flower-shaped treats. It is the same with Bugles. It would be impossible to get the look exact but the cone shape is actually meant to resemble a horn, hence the name Bugles.

Many of us use Bugles to put on the ends of our fingers for fun but perhaps we’ve been doing it wrong all along! 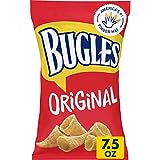 Through the years, there have been several different Bugles flavors that have come out. They have salty and simple flavors like their original but they also have made way into the sweet categories with flavors like caramel and chocolate.

Here are some of the flavors that have been produced, many of which are still available today. Some of these flavors were discontinued but many are out there.

Bugles are a really fun treat and when you learn a bit about the history, you see they’ve been a successful snack. This was just the beginning of General Mills foray into the snack food world and they must have done something right since we still find Bugles everywhere today.

Whether you play your Bugles like the horn they are or enjoy them as a finger hat, you simply can’t go wrong!