Sherbet Dip Dabs is the brand name given to a lollipop creation by the company Barratt. The lollipop creation is a small round lollipop containing a relatively strong sherbet flavor. This idea was dreamt up by the employees at Barratt who were looking on obtaining some profits from the significant popularity of the Sherbet flavor.

The flavor of this 70s candy was sure to produce a successful invention and after the release of the Double Dip brand, a product was being rapidly developed by the Barratt employees to match that of the Swizzels Matlow one. The success of the Double Dip brand prompted the invention of the Dip Dab which may have a similar name to the creation from one of its rivals but proved to be a unique and popular creation nonetheless.

The Dip Dab had combined the sweetness of the lollipop with the sherbet powders used by the Double Dip brand. This resulted in the creation of a lollipop which was created to be dipped in the sherbet powders which were sold in combination with the lollipop. The aim of this product was to be as interactive as possible and provide many ways in which children and adults of all ages can enjoy the classic flavor of the Sherbet. The sherbet flavor itself had been invented much earlier which spouted the creation of many other products that would go on and utilize the flavor to its full potential.

The Sherbet Dip Dab had to contain lots of sugars as this helped to increase the intensity of the sweetness and also masked the result of the acids and bases reacting. The sherbet could either be eaten raw with the lollipop acting as the spoon in this case but the lollipop tended to have an extremely sticky exterior which was produced when licking the lollipop.

The sticky exterior also acted to stick on the sherbet powder which also lived up to the Dip Dab part of the name of the product. The Dip Dab proved to be very popular among the United Kingdom audience where the majority of the consumers for the product originated from. The good reception that was received and the extremely high sales meant that the Sherbet Dip Dab remained in production and factories were also dedicated by Barratt to ensure that the production of the classic brand remained in existence.

To conclude the Sherbet Dip Dap brand used the Sherbet brand to its full extent and built on the products of rivals to create a completely unique brand which was successful due to the grounding of previous products such as the Double Dip brand.

Barratt & Co is one of the most famous confectionery manufacturers and is the creator of Sherbet Dip Dabs. It all started when the brothers, George Osborne Barratt and James John Barratt, started a small business in Shoreditch. The Brothers were chefs, and their little pastry store was opened in 1848.

They worked hard to master candy making, and eventually, George became the most respected developer and inventor of candies. One of the first inventions that gained popularity and the love of people was the half-baked Brandy Snap Biscuit.

Even though the business was going well, the brothers decided to go their separate ways, and eventually, in 1852, George became an independent candy maker. Back then, technology was not advanced, and everything had to be done with bare hands. Therefore, with hard work, he was producing a few pounds of candies and sweets. He had a wife, who was a great help and worked in this candy store by his side.

The new product that was introduced to the market was called “coconut chips.” It was made from coconut and crystallized sugar. Another invention made by him was “almond rocks.” The breakpoint in his business was when his sugar boiler failed, and he had to pour his liquid candy into the tins. He hoped that it would become hard. Well, it did not.

To his surprise, the customers loved the new product and loved that it was not hard like candy but had more of a toffee texture. That is how “Stickjaw” was invented. By the year 1890, the Barratt & Co. company became the largest candy and jam manufacturer in London. In their factories, they had more than 500 people.

George Barrat died in 1906 and left his candy-making business to his sons. The Barratt Company was incorporated in 1909 with a capital of 330 000 pounds. By that time, the factory used to produce nearly 400 tons of candies and sweets a week.

Following the company’s growth, a new product, the Sherbet Fountain, was invented and put on the market in 1925. After 15 years, Barratt & Co. released one of the most popular products, Dip Daps, in the 1940s.

Everything has an end, and Barrat & Co did too. Eventually, the company started to struggle financially and did not have sufficient labor anymore. Therefore, one of the main factories closed in 1975. Production was moved to the smaller manufacturing site.

Struggling Barratt & Co was acquired by Cadbury corporation in 1989. In 2013, the “Barrat” brand name was changed to “Candyland.”

Barratt’s Sherbet Dip Dabs logo is very bright and vivid. The main colors that are used are reddish-orange, white, and yellow. The yellow color is a symbol of happiness, sunshine, positivity, loyalty, and joy. White represents purity and innocence. The dark orange color is a symbol of joy, creativity, fun, balance, and freedom.

Therefore, the logo is intended to be bright, full of positivity and life. It has an attractive visual side and, with even one look, will make kids and adults want to taste and eat it.

The Dip Dap logo is made up of two words. “Dip” is on top of “Dap.” The letters are in lowercase and are a dark orange color. “I” from the first word and “d” from the second are united and presented as a straight line connecting two words. The “Dip Dip” has a yellow background, making the words stick out. There are white dots sprinkled around the yellow frame of the logo.

Typically, the candy has yellow packaging with the large “Dip Dap” logo on it in the center and “Barratt’s” logo in the upper left corner. A red lollipop picture is printed below the logo. The package also states that it is a “Sherbet Dip with a tasty strawberry flavored lolly.” Also, it says that there are only natural flavors and colors used. 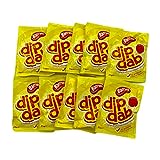 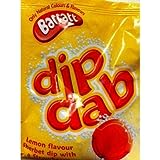 Candies Made With Sherbet Powder

Sherbet is a sweet powder that has a fizzy texture. In most cases, people taste this treat with licorice or lollipops. Some people even eat it with a small spoon or finger. The word “sherbet” has a Turkish origin and refers to a delightful, syrupy drink.

The powdered sweet mixture became especially popular in the 19th century. People used to put them in the water and mix them; it was like soda. It was also mixed into different beverages to give them a nice sweet taste. Some famous candies that come with similar powders as Dip Daps are Pixy Stix or Fun Dip.

Different companies manufacture and make sherbet powders using various ingredients. For example, Sherbet Lemon, which was especially popular in the United Kingdom, is one of the most famous uses of this sweet powder. It is a boiled candy with an anise flavor, and sherbet powder is located in the center. The candy was first presented in the Harry Potter Series, where Dumbledore adores this particular treat.

Barratt’s Sherbet Fountain has been sold since 1925. It came with a sherbet tube and a licorice stick. However, a new version was also introduced; this time it had a strawberry flavor and a hard gelatine stick. The original version of the candy was sold by Henry Edward Brung under the name of Barratt’s company.
Originally, in the Sherbet Fountain, the stick was intended to be used like a straw to savor the sherbet powder from the package. This was one of the first versions and previous products of Barratt’s Sherbet Dip Dabs.

The first company that made Sherbet Dip Dabs was the Barratt company. The Barratt brand is also known for producing the popular fizzy snack, “Sherbet Fountain”. Barratt is a subsidiary owned by Tangerine Confectionery, and it seems that Barratt may have had its name changed to Candy Land. However, it seems that products may still be produced under Barratt’s name brand.

How Do Sherbet Dip Dabs Taste?

Sherbet Dip Dabs have a great combination of flavors. The red lollipop portion of sherbet dip dabs is very succulent and sweet. The sherbet is sharp, fizzy, and zingy, it has a white color to it. Put them together and you get a sweet fizzy sensation.

When Where Sherbet Dip Dabs First Made?

The exact date of when Sherbet Dip Dabs were first made has been hard to pin down. What we do know is the Barratt company’s Dip Dabs was made sometime around the mid-1970s.

Here are the ingredients of Sherbet Dip Dabs.

Dip Daps was actually kind of a realm of penny sweets. It was not as cheap as others, but we were a “cool” kid if we had them. Most of the time, sherbet powder was leftover. Therefore, sometimes if two lollies were found in one package, it would make our day.

Sherbet Dip Dabs have managed to survive and remain a popular treat among both children and adults. Its sugary powder and lollipop would eventually cure any sweet tooth, right?