The PayDay Candy Bar offers us a little break from the typical chocolate bar. The payday bar is unique, rather than the typical chocolate and roasted peanut combo we know and love, the PayDay bar has salted peanuts, and it’s covered in light caramel. The combination of the salted peanuts and the caramel tastes great and offers us something a bit different from the typical match-up. The Payday candy bar has become rather successful, being popular among millions. The page is dedicated to the Payday Bar, and you can browse it to learn more information about this fascinating candy bar.

The PayDay Candy Bar is a caramel candy bar with peanuts. The cameral layer is wrapped around salted peanut nougats in the center. Originally, the PayDay candy bar was produced by Frank Martoccio but is currently, as of today, being produced by the Hershey company. It was originally created in 1932 and is still widely available in stores and online today. After the invention of the Payday bar, it quickly gained popularity. The rights to the Payday Bar were acquired by Hershy in 1996.

With a new owner came new innovation and new ideas for the PayDay Bar. Since being acquired by Hershey’s, several different varieties of the PayDay bar have been released next to the original one. These Spin-offs to the Payday bar are typically sold as special or limited editions, such as the Honey Roasted Limited Edition Payday, released in 2003.

According to the Hershey company, each PayDay bar is made with the following ingredients: peanuts; sugar; corn syrup; nonfat milk; palm oil; contains two percent or less of the following: salt; carrageenan; monoglycerides and diglycerides; egg whites; and soy protein. Currently, from Hershey’s official website, you can order different sizes of PayDay bars which include the original and/or standard size, the king-size, the snack size, or the six-pack size. The standard PayDay bar contains approximately 3.8 grams of protein per ounce of a candy bar which is rather high, especially when compared to other candy bars. An entire tub of PayDay bars that weigh about forty-six point four ounces will cost you about twenty dollars on the internet today which is a pretty good deal relative to other candy bars that are not even as popular or well known as the PayDay bar.

The PayDay remains a fan favorite to this day. It is sold across North America and appears like it will be around for many more years. It offers users a unique taste of caramel and peanuts that cant be found elsewhere.

The Year Payday Was Invented

The Payday bar was first invented in the year 1932. It is a mark of its popularity that it is still a major candy bar on the market nearly a century later. It may be that the payday continues to survive based on it filling a fairly unique role in the candy bar market. It is a bit different from the more average chocolate or chocolate and peanut combination. That is not to say the payday bar does not add some chocolate to its mix. A chocolate-covered payday bar was also added, giving the payday a bit more variety.

Who Invented the Payday Candy Bar?

The Payday bar was first invented by Frank Martoccio. He was the founder of the F.A Martoccio Macaroni Company.

The Company That Makes The PayDay Bar

The Payday Candy Bar is produced by the well-known Hershey Company, which makes products such as The Whatchamacallit and The Skor Bar. The Hershey Company is of course is not the original producer of Payday, that credit belongs to Frank Martoccio.

Is the Payday Discontinued?

Where Can I Buy The Payday?

You can buy the Payday candy bar in several ways. First, you can still buy them in stores, so you may want to check around in locations in your area first. Stores like Wal-Mart and Sam’s and common through many locations and have been known to sell the Payday bar. If it’s not sold around you then you can still buy Payday online. You can order them from online retailers and have them shipped out to you, often for no extra charge. You can check the rest of this page for both stores that sell the Payday, as well as online deals on ordering the Payday bar off online. 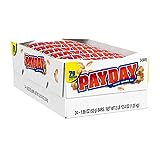 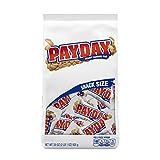 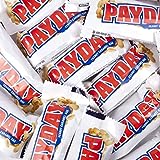 Here are the ingredients of PayDay Candy Bar.

The payday bar has had several spin-offs over the years. They are often released as limited editions, but some stick around for a while.

The PayDay Pro Protein Bar was released in 2005. The Payday Pro offers a high-protein energy bar that is somewhat similar in taste to the original Payday bar. The Payday Pro Bar also comes with several trail mix flavors, such as “peanuts ‘n’ chocolate and peanuts ‘n’ raisins.

What is a PayDay Candy Bar?

What is in a PayDay candy bar?