Candies have evolved greatly over time to become the sweet treats that they are today. Originally, candies were not intended to be eaten for enjoyment and were instead made to deliver medicines. There are various candies that have evolved over the years from humble beginnings as medicinal products. Aniseed balls were likely used in this way in their early history, and this very traditional method of sweet-making is still the way that many modern treats are crafted.

Aniseed is a very specific flavor and not one that everyone likes. If you love the flavor of licorice candy, however, you will find these little treats to be delightful. This is a common treat in the UK and it has been sold for years in the UK and Australia, as well as Ireland, New Zealand, South Africa, and Canada.

Licorice has been a popular candy flavoring since the Romans used it for the thirst-quenching nature of the root itself. Licorice has also long been associated with medicine and was used by ancient peoples for generations to help with stomach complaints and to soothe toothaches. The leap to candy flavoring was logical since the flavor profile of this root was so familiar to people. Adding some herbs and spices was a simple way to make the licorice flavoring even more enjoyable, and this is the foundation upon which Aniseed Balls were created upon.

This type of candy has been around for a very long time. Comfit-style candies were initially used to deliver medicine that did not taste very good. A comfit is made by forming layers of candy around a single seed of something. In the case of Aniseed Balls, the core of the candy was originally an Aniseed The modern candy is made with a rapeseed at the center. The layers of sugar that are formed around it are added by dipping the seed into layers of liquid sugar and allowing the candy ball to dry and harden in between dips.

Hard candies were a great choice for production before refrigeration was common. Most candy sellers could not keep chocolate and other sugary sweets that were softer from melting in the summer. This meant that any candy that could be sold year-round was a much safer bet. All of the various hard candies that are still sold today were the solution that candy makers and sellers needed to be able to make money when the weather was hot.

These kinds of candies were also included in soldiers’ rations during both world wars because they could hold up to being stored in pockets and rucksacks without melting or breaking apart. There were not many other candies on the market at this time that could say the same, and so the Aniseed ball and candies like them have enjoyed lasting popularity.

These candies are hard, and they are shiny and dark brown. They have the consistency of a Gobstopper or Jawbreaker in the US, and they are about 13 mm across. This is not a big sweet because the intention is that you will suck on it until it dissolves in your mouth. The ball itself is flavored with Aniseed oil to give the entire candy the strong flavor of licorice.

These little treats are not intended to be chewed in any way and you would probably hurt your teeth trying to do so. This is a candy that you suck on and dissolve slowly over time. The flavor has been added to all of the layers of the candy, so it should have a strong licorice flavor all the way through.

Candies like the Aniseed Ball were still made during the second world war, despite sweet rationing, because they were fairly efficient to make and did not create wasted product. Once the war was over, more complex candies could be made again, but Aniseed Balls were the practical sweet of the times during the era of rationing and war.

This candy was probably first sold under this name during the second world war. The original candy was made and marketed as early as 1910, but the name of the product was different at this time, as was the intention of the sweet. The candy became famous for more than its flavor profile during the second world war when soldiers setting off Limpet mines used them as timing delay devices.

These sweets dissolved slowly enough that inserting an Aniseed Ball into the timing mechanism could delay the explosion of the mine for long enough for a diver to drop them off near enemy ships and swim away. Famous for their help in the war effort, the sweets had cemented their place in history and popular memory and are still sold today.

While Licorice is not as common a flavor additive in candies today, at the time that Aniseed Balls were helping the war effort, anise was a very popular and common flavoring for candies and sweets. This might seem like a very strong flavoring to a modern candy audience, but there are those who love how flavorful these little treats are. Before the invention of chewing gum or other breath fresheners, Aniseed Balls and products like them were used to freshen the breath. This is part of why the flavor in these classic treats is so strong, even today.

This candy is typically sold in bulk at candy stores that allow you to fill up your own candy bag and pay by weight. Some makers also sell them in bags or plastic containers. You will usually have to buy a fairly large amount of these little candies at once since they are not sold individually wrapped by most makers. If you have ever purchased Jawbreakers candies, you know what this candy looks like and how many of them you can fit into even a small bag. 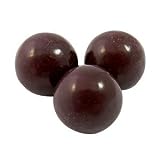 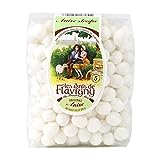 From an online seller’s entry for Aniseed balls:

As you can see, a simple candy. Most of the ingredients are just sugar. Some of these candies do not even contain the trademark seed at the center of the candy. In these products, a hard ball of sugar crystals is used to start the candy. This information might not be stated in the packaging of the product, so if you are looking for that really classic experience with the Aniseed in the center, you might have to do a little research to be sure that is what is at the center of the product you have ordered.

As mentioned before, Jawbreakers and Gobstoppers are the candies most like Aniseed Balls. Any candy that is made by layering liquid sugar onto a central seed of some kind is going to give you the same eating experience. You cannot chew these candies and they must be sucked on, so you will also have a similar eating experience when you pick out a sucker to enjoy. Suckers are made in much the same way as Aniseed Balls and they are only different because they have an added stick attached to them.

Layering sugar on top of a unique candy center is done in other candy-making, but most candies are not made to be as hard as an Aniseed Ball. You will get a longer-lasting eating experience when candies are made in this manner since candies this hard have to be sucked on. Any candy that you will have to take some time to enjoy is a lot like an Aniseed Ball.

Appearance of the Aniseed Ball

Aniseed Balls are a dark, reddish-brown in color and are not very large. Gobstoppers and Jawbreakers are often sold in various sizes, but Aniseed Balls have always been about 13 mm in size. This is a candy that is sold with remarkable consistency by each candy company that makes a version of the sweet. You will be able to count on the kind of product that you are getting when you order these candies, even if you are getting them from a candy maker that you have not purchased from before.

For those in the US, there are not many good options to get authentic Anise Seed Ball candy, but they can be ordered online or from major candy retailers in the UK, Ireland, and Australia. You can simply look for the reddish coloring of the treat to be sure that you are getting the classic Anise Seed Ball product to try out at home.