These classics have been around for a very long time, and they definitely should be on your list to find! Learn more about Ice Cube Candy below.

If you’ve ever had the chance to enjoy some Ice Cube candy chocolate pieces, you’re quite lucky! Those who know this smooth and delicious chocolate appreciate the quality and the tasty nature of it.

The downside is that since these are made in Germany, it’s harder to find a lot of details about their history, but we were able to dig up some details. These perfect candy bars were designed to look like ice cubes, but they’re actually chocolate. They come individually wrapped in sweet foil wrappers, with a decadent chocolate piece inside.

Once cool thing about ice cube candy is that while they are chocolate, they almost felt cool in your mouth, like an ice cube would. So, it’s not just everyday chocolate but a smooth and tasty chocolate treat that also slightly resembles ice cubes.

According to stories from those who love Ice Cube Candy, they’ve been around since sometime in the 1930s. They are made and packaged in Germany, through a small company named Nappo. However, even though they are a German candy, they are also sold in the United States. In the US, the company that manages sales and distribution is Albert’s.

Every cube used to be wrapped in a snazzy blue and white foil wrapper. They used the colors as remembrance of ice cubes. However, in more recent years, they’ve switched to gold wrappers that look sleek and classic. They are still very nice, and now just have a more classy style to them, but remain the same tasty candy.

This chocolate isn’t your normal chocolate bar, either. It’s soft and sweet. Really, they aren’t even completely chocolate. Instead, they are described as hazelnut bars. This lends to flavors that are a tad bit nutty with the perfect hint of sweetness. And they still have that coolness you feel on your tongue when you take a bite.

You can buy them as individual cubes, but now you can also purchase a large box that comes with 60 pieces in it. Every chocolate candy weighs just slightly over 1 ounce and is in a square ice cube shape. Remember, they are individually wrapped.

There are plenty of memories of finding these at the candy shop down the road for people who grew up in years after the 1930s. You too might have your own memories to think of here.

When Were Ice Cube Candy Invented?

The specific history of Ice Cube candy is challenging to uncover. With it being created as a German snack, the information behind invention and creation is harder to find. However, we aren’t 100% left in the dark. We just have limited details.

From what we could uncover, this candy is also known as “ice chocolate” throughout Germany, and it’s also very popular in Sweden. It first became very popular as a specialty around Christmas time, but it’s available all year long.

They use two-thirds coconut oil to one-half chocolate to create the unique candy. The original invention is credited to 1927 in Germany, by a known confectioner named Adam Eichelmann.

It was unique from the beginning thanks to that icy appeal that doesn’t negate the chocolate, smooth tastes of the candy. There has never really been anything else like it that had that icy cool sensation paired with delightful chocolate flavors.

The scientific rule behind this cooling effect has to do with the coconut oil that is used in the chocolate candy. Other companies that have tried to mimic the sensation have added menthol to the mix, but they aren’t the same as Ice Cube Candy.

The ownership of Ice Cube falls under a candy company named Nappo in Germany. It’s a small company, but they produce plenty of these treats. In the United States, distribution is completed by a company known as Albert’s. Albert’s owns the rights to the candy in the US.

If you’re purchasing anywhere in the US, you will notice that the wrappers are all stamped with “Albert’s” on the side, thanks for the marketing and distribution agreements that allows us to enjoy these tasty treats.

If you’re seeing or purchasing them in Germany or Sweden, you likely won’t see Albert’s printed on the wrappers, since the process goes through Nappo in those countries.

How Did Ice Cube Candy Get Its Name?

One of the downsides to not being able to find a lot of history for a particular item is that we can’t always answer all of the questions about that candy. But here, even though we don’t have the official tale of where they came up with the name, it’s almost too obvious.

This ice candy is incredibly unique. You see, it’s chocolate, but it has this unique cooling sensation when it touches your tongue. It almost feels like an ice cube, but it’s paired with that chocolate, smooth flavor.

So, with that detail in mind, the name Ice Cubes really seems like the perfect fit. It’s not ice at all, but that cooling sensation gives you the illusion of ice. Except for the fact that it really tastes so much better with chocolate and hazelnut flavors! 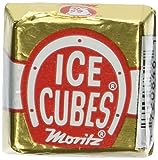 You can also buy Ice Cube Candy at Old Time Candy by clicking the image below.

To our knowledge, there have never been any other flavors of this little chocolate candy. You may find different colors of wrappers if you go looking into them. This is because the wrappers for a very long time were blue and white, symbolic of ice and water.

However, in recent years, they have transitioned to gold wrappers to give the candy a classy, sophisticated appearance. Despite that change, it’s still the same great candy that it’s always been.

One great flavor, and that’s really been all that they need. After all, this traditional chocolate flavor isn’t just your normal milk chocolate. Instead, with the coconut oil being such a high portion of the mixture you get a nutty, semi-sweet production with that icy sensation and it’s pretty cool all on its own.

All too often, there are some really awesome classic candies like this one. You know there has to be some really great stories and history behind the invention, but we only have very limited details.

And yet, the suspense of this tasty chocolate treat doesn’t negate the sensational flavors and ice feeling that you enjoy when you eat it. It’s definitely unique, but it’s also very good for those who have tried it.

If this sounds like something that might appeal to you, Ice Cube Candy can still be found and purchased on the market. You may have to look online, or in certain areas, but it is distributed throughout Germany, Sweden, and the US still. It’s just a matter of finding the best place to get it!