From a timeless treat to something you can use to make all kinds of desserts, Jell-O is one of the most versatile sweets on the market in so many ways. It has a long history of being there in times of sickness and in times of joy.

There is much to learn about this simple dessert creation. Read more about it below!

Jell-O made its debut more than 125 years ago. It’s stood the test of time and had a lot of great creations and ideas attributed to it through the years. It’s officially under the ownership of Kraft Heinz. The original version is still Jell-O. You might find other jello products out there, but they are most definitely generic imposters. This specific spelling (Jell-O) is actually a registered trademark of the brand.

The Jell-O brand is known for its powdered gelatin mixes, and those were their original creations. However, now you can find no-bake pies, pie mixes, desserts, pudding, and more that falls under the brand name.

Jell-O is based in the local United States, right out of Chicago, Illinois. It was introduced by Pearle Bixby wait in 1897 when Pearle and his wife, May, decided to test adding some flavors to granulated gelatin and sugar. There was a prior patent on the idea, that stemmed back to 1845. However, Pearle was the one to trademark the name Jell-O and officially bring a product to market.

Those flavored sugar packets and gelatin just require the addition of some water, and then to be placed in the fridge. There, they can solidify to that jiggly tasty treat we know and love. The original creation had flavors like raspberry, lemon, orange, and strawberry. Now, you will find quite a bit more than that, though.

Pearle and his wife were from LeRoy, New York. Pearle’s history prior to this creation was manufacturing cough syrup and working as a carpenter. It was in 1899, that Pearle sold his creation to Orator Woodward, who owned the Genesee Pure Food Company.

There were several elements that made this item so popular. The fact that it was sold in a powdered form and just needed water and refrigeration to make it perfect was a win. It was a popular choice in home economics classes across the globe as well. It took awhile for them to figure out the best ways to market and sell the product, but when they got it right, it really took off.

It wasn’t until about 1904, when salesmen went door to door with cookbooks for using Jello-O that they really started to see sales rise. Once the first flavor started to take off, they added other flavors, some of which are no longer in production. Cherry, chocolate, and peach were among those first additions.

Before long, celebrities started featuring Jell-O and touting its awesome qualities. Many print ads, TV commercials, and other marketing attempts continued to bring awareness to this dessert. Eventually, it started being recognized as “America’s most famous dessert”.

As time moved on, more flavors were created, and new recipes were designed. Before you knew it, there were tons of recipes out there and plenty of cookbooks with neat ideas. You might remember the jingle that sung out J-E-L-L-O, which was popular for many years. This jingle came from Jack Benny’s radio show, written by Don Bestor.

In 1936, pudding became part of the Jell-O line again. It’s not the same gelatinous mixture, but still available in the powder mixes, or pre-made as well.

Starting in the 1960s, after almost 60 great years, Jell-O started to see a major decline. They struggled with this for close to 20 years, but kept on moving with production. There were many thoughts as to what caused the decline, but Jell-O knew they had to take action.

The marketing associates went to work looking at old recipes and marketing, and started creating new campaigns geared towards families with young children. This is when Jigglers made their debut, and helped increase sales again. Bill Cosby was a spokesperson for the brand for more than 30 years, starting in 1974.

In 1990, Kraft Foods took ownership of Jell-O and stepped up their game. They added new ideas and new flavors, with some really awesome success. We saw things like Jell-O wrestling and Jell-O shots become popular.

In recent years, sales show that more than 400 million gelatin products and more than 1 billion cups are sold every single year. The brand and products continue to be successful.

When Was Jell-O Invented?

Prior to the official name Jell-O, there were some similar ideas out there. In 1845, there was a patent for powdered gelatin, sugar, and flavor mixtures. However, a product was never really created from that patent.

Gelatin was nothing new, and even using it in desserts wasn’t new. But having the powdered, flavored product packaged and ready for use was the new concept and Jell-O was born.

In 1897, a gentleman name Pearle Wait, and his wife May, decided to turn this creation into a real product and officially trademarked the name and put together the idea. They sold the Jell-O product to Genesee for production starting in 1899.

Pearle Wait was the original creator of Jell-O. He sold his recipes to Genesee Foods because they had a drink named Grain-O so it was a great fit. Genesee produced and sold the product until about 1925, at which time the company merged with Postum.

Postum merged with Birdseye’s frozen foods in 1927 and together they created the General Foods Corporation. General Foods remained the owners until 1990 when they merged together with Kraft Foods.

This brings us to the current time where Kraft Foods are the owners and the producers of everything under the Jell-O brand. 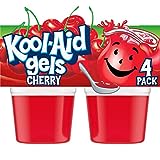 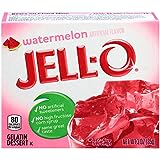 Through the years, there have been a ton of flavors and a ton of products. They were known for their recipe books with unique ideas. Jell-O salads were always a huge hit and the company even tried to make some vegetable flavors like tomatoes, celery, cabbage, cooked pasta, and green peppers. These flavors didn’t last long.

You can still find tons of recipes out there, although dessert recipes tend to be the top choice. On top of the gelatin product, they make several other things now too. This includes puddings, ready to make desserts, pies, pre-made pudding or Jell-O cups, and more.

These are some of the common Jell-O flavors available now.

These are just the gelatin flavors. There are tons of puddings and no-bake desserts as well. Your dessert options are endless with Jell-O.

If you’re looking for a tasty treat, or a versatile product that comes easy to make, Jell-O is all that and more. This product has stood the test of time for more than 125 years, and evolved into a huge brand with more than a hundred different products to choose from.

You simply can’t go wrong. Choose from pre-made ideas or make your own powders that just require a few minutes and minor ingredients to create. Don’t forget all the fun recipes out there to make your own creations!

What is Jell-O made out of?

When was Jell-O invented?

Although the exact history of how Peter Cooper created the product is unknown to us today, we do know that in 1845 he secured a patent (US Patent 4084) for a gelatin dessert powder called “portable gelatin.” His invention was a basic edible gelatin that had no flavoring to it.