Milka is one of the most recognizable brands of chocolate products in Europe. You might have noticed the posters of a unique purple cow shown in an Alpine meadow. This cow named “Lila” is the symbol of Milka, a German chocolate brand, which has won every chocolate lover’s heart since the 1900s.

When we think about Milka, we imagine incredible flavors, but it also makes us feel things like Happiness, love, and joy. That’s exactly what Milka wants its customers to feel and think about while we enjoy their products. Even after so many years, Milka remains everyone’s favorite.

Have you ever wondered who gave us the opportunity to enjoy delicious milk chocolate, Milka? In fact, we should be thankful for the invention of Milk powder, in the late 1800s  the chocolate legend Henri Nestlé had developed a powdered milk product, inspired by this commercial product, his friend Daniel Peter invented milk chocolate.

The Inventor of Milka

The invention of Milka is strongly based on milk powder’s existence. It started back in 1901 when the first Milka bar was produced in Germany by Swiss chocolatier Philippe Suchard. Before that, in Switzerland, he founded a chocolate company named after him, that later expanded to Germany and soon became the favorite snack for German people and was included in the top milk chocolate brands in Germany.

Unfortunately, Philippe couldn’t fully enjoy the success of his company. He passed away in 1884, and the Suchad company moved to the ownership of his son-in-law, Carl Russ, soon after Suchard produced its first milk chocolate, Milka.

Since 2012, it has been owned by us-based company Mondelez International. The company has markets in more than 52 countries, already having sold a huge number of 400 million chocolate bars all over the world.

As mentioned above, the success and popularity of Milka are based on its ingredients. The brand often highlights the fact that they only use milk from cows that are fed on Alpine grass.

For potential customers, it happened to be an important detail in chocolate making. For people, it means that the product is made with healthier, high-quality milk. Milka is proud of it, so they turned it into their unique selling point.

Milka chocolates are mainly made with three ingredients: cocoa beans, 100% Alpine milk powder, and sugar, but we should take into consideration that there are many different flavors of Milka, and different flavors mean additional ingredients. So we suggest you check out the detailed ingredient information on the individual candy package itself.

How Milka Got Its Name

Milka is a simple name, but we probably agree that it fits the milk chocolate brand, a name that combines the German words “milch,” meaning milk, and “kakao,” meaning cocoa. The full product name on the label at the time when Milka was created was “Milka Suchard’s.” It was later changed to Milka. This combination is important for all chocolate lovers, so choosing Milka as the name of the brand was directly directed at the target audience.

Lilac as the Brand Color

Now let’s talk about the importance and the meaning of the purple color for the brand. It is more like a symbol for Milka products. In the year 1901, when Milka was first produced, the chocolate label was lilac in color, and there was a drawing of an Alpine shepherd accompanied by a grazing cow. The principle has stayed the same even today, and it’s very noticeable in every attribute of the chocolate.

Lila means lilac in German. It’s a color that the brand has grown to be associated with.

The purple cow and the color itself have always had a strong bond with Milka, making it a distinctive, unique brand that stands out from other chocolate brands on the chocolate shelves in the store.

It wouldn’t be an exaggeration if we say that strong marketing plays an important role in the brand’s long-time success. Because of extensive marketing campaigns, the brand has been known and has gained popularity since its beginning, and it’s not just about popularity; they’ve earned loyalty and trust from their customers.

Even in the early 20th century, when the brand was first introduced to the market, they used vehicles and facades for advertising purposes, and this is not all. The brand used all the attributes that were connected to the product, including packaging, posters, postcards, and collector’s pictures.

Have you heard about their creative campaigns? In their famous marketing campaign, Milka sold chocolate bars with one square missing. Consumers had the option of either taking the square for themselves or sending it to a loved one with a customized message. The insight of the campaign was the idea that the last square of the chocolate bar is the most delicious, and you want it to be eaten in a special way or by a special person.

The campaign first started in France in 2013, and guess what? As a result, more than a million last squares were sent. It was a huge marketing success for Milka, bringing Mondelēz International over 1.3 million euros.

For another campaign, Milka set up a chocolate vending machine and a life-size Milka cow next to each other. If you could touch the cow and the machine both together, you would get Milka. The catch, however, was that the cow kept moving further away, encouraging people to hold hands.

Milka never fails to surprise its customers with interesting marketing campaigns, and in most cases, they’re oriented on people’s interaction with each other. This creates interesting experiences for its customers and, as a result, strongly influences brand loyalty and popularity.

There was a casting call for a Milka chocolate advertisement in 2019 that failed catastrophically. A casting call on their website was called out for objectifying girls and being outright disrespectful. They used sentences like “She must be beautiful and angelic” and “Eye color and hair color are not important but no red hair.” etc. They even wrote that they didn’t want overweight children to be in the ad.

Not surprisingly, the announcement got a very bad reaction from the audience. Most of the people found it offensive and discriminating. It was an important hit to the reputation of the brand. We all know that in cases like this, there is nothing else left for the brand but an apology. Eventually, they posted a public apology.

For more than 40 years, Milka chocolate has been available as 200 and 300-gram bars. In 2007, the company used Flow Pack packaging instead of aluminum foil, and from 2018 onwards, Milka bars are packed in matte foil.

The back part of the packaging provides information on ingredients, nutritional values, and some details about the brand, providing consumers with comprehensive information on the products.

This is the package that is distinctive and immediately recognizable in any chocolate selection in stores. A company development of 120 years and target-oriented clear branding created a packaging design that has made Milka’s lilac cow a true icon for many people.

And have you ever heard about the drama going on between Ritter Sport and Milka over chocolate shapes? Ritter Sport is reported to have introduced square-shaped bars for the convenience of slipping them inside jacket pockets, and it had the shape patented in 1993.

Milka decided to challenge Ritter Sports’ monopoly, and instead of the common rectangular shape, it went for square-shaped bars. This is the story of how a decade-long battle started between these two chocolate companies, fighting over the shape.

Milka is sold in several packages and flavors that you can try if you want to discover different, incredible tastes. Soft cookies with Milka chocolate bits. Milka chocolate wafers and there are many other options for chocolate lovers, but what about Milka’s partnership with Oreo? Everyone’s most favored and loved combo is Oreo and Milka together. In 2016, they introduced their incredible cookie-chocolate combination.

Oreo isn’t the only brand combined with Milka. Since 2008, Milka has used a co-branding strategy and has created new interesting products. Milka has chosen to support the brands Daim, Philadelphia, Oréo, Crispello, Tassimo, and Tuc.

This strategy shows that Milka is ready for new challenges and isn’t going to stop on its current reputation but to build new products for new segments of customers and gain even more respect and love. 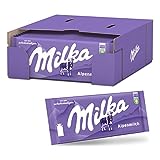 Milka is an example of strong and targeted brand development, clear branding, and healthy marketing communications.  But what is most important – is it has a high-quality product that people love and respect. The brand also doesn’t hesitate to risk using new creative and innovative ways to create new products for their loyal and potential customers.

Where is Milka chocolate from?

Made with Alpine milk, Milka has been delighting consumers in Germany and beyond since 1901.