If you love peanuts in your candy bar, you have probably always loved this version of Hershey’s classic candy bar. This is a really basic candy option but one that is really delightful because of its classic flavors. Hershey’s has always done a really good job of marketing really classic and simple candies correctly to get them the attention and the fan following that they deserve.

Mr Goodbar has been around in some form for over a hundred years, which really speaks to the staying power of candy that is just chocolate and peanuts. This is one of the candy bars that both your parents and grandparents likely enjoyed, and you can give it a try as well if you wish!

Mr Goodbar was introduced by the Hershey Company in 1925. Their recipe was based upon the Hershey Milk Chocolate Bar With Almonds that had been in production starting in 1908. Milton Hershey felt that it would be bad for Hershey bar marketing to associate the company with a chocolate bar that contained peanuts, so he actually originally marketed these candy bars as products of the “Chocolate Sales Corporation”. This was a fictitious company name that was dreamed up by William Murrie.

While it is hard to imagine now, there probably was a good reason for this worry on the part of Milton Hershey about candy bars that included nuts. The candy market was much narrower in scope at this time, and there were fewer products that were sold just for the enjoyment of eating them. A lot of candy products were actually created just to help to deliver medications in a more pleasant way rather than to be sold to children or adults who enjoyed eating sweets.

The name of the candy bar was actually due to Milton Hershey’s bad hearing. Someone who had tried the test batch of the product stated, “That’s a good bar”. Hershey thought that the person had said, “Mr Goodbar”. And so the name stuck and became associated with one of the more iconic candy products that Hershey’s has ever made.

The product was later associated with the Hershey’s company and given a new livery which has remained largely unchanged through today. The yellow wrapper with the red logo lettering and the image of the candy bar itself has long been associated with this product. For those who love a good, solid, simple candy bar, the packaging is enough to tip you off that you have found the right candy treat.

The mini Mr Goodbar is also packaged in the same livery and has been since its introduction in 1939. Many candy lovers think of mini candy bars as a new invention driven by Halloween candy sales, but this was actually one of the early developmental changes that Hershey’s used to help market all of their most popular candy bars. The mini candy bars that you put in your bowl to give to kids at the door on Halloween night are not a new invention at all when it comes to Hershey’s products!

When Samuel Hinkle was hired by the Hershey company, he immediately started trying to develop new recipes for the company to market. He did not have an experience with food chemistry, but he felt that the tastes of the public were changing and that the Hershey company needed to change to keep pace. There were various recipes that were worked on during this developmental period that, included peanuts. Hinkle felt that the American public appreciated peanuts in candy bars and wanted to be sure that there was a solid option with this ingredient in the Hershey stable.

Hinkle was interested in using Spanish peanuts rather than Virginia peanuts because he felt they were more palatable and because they are smaller. This allowed for more milk chocolate per bar and a much easier experience when breaking the candy bar apart or biting off a piece of the bar. This is because the foundation for many of the products in the Hershey’s lineup which included peanuts since the Spanish version seemed to be much easier to include in candy products than the larger and more cumbersome Virginia version of this legume.

The Mr Goodbar formula won out over some of the other candy bars with nuts that were worked on during this time of experimentation. After all, this makes sense in many ways. The candy bar had already been part of the Hershey’s product lineup for some time with enough success to keep it on the roster, even if Hershey himself did not want to be associated with the candy bar. This was also a great option for candy bars that were affordable to make and market. All that needed to be done was to start promoting the candy under the Hershey company name itself.

Hinkle would also help to develop Krackel, another very popular candy bar that is sold by Hershey’s even today. Hershey’s Chocolate Syrup can also be attributed to Hinkle, and he helped make sure that it would debut at Hersheyland in 1925.

Despite Hershey’s original antipathy about associating the bar with the company, Mr Goodbar was one of the candies that the Hershey company used to try and save the business after the Great Depression. Candy bar companies all over the US were marketing their products as “complete meals” and “meal replacements” during this period when food was still scarce and people did not have much money. Mr Goodbar was marketed as “protein-rich” due to the peanuts that it contained, and it was the leader in the meal replacement offerings that the Hershey company offered up to consumers during this time. The bar was also marketed with the slogan, “Quick Energy in Every Bar!”

The new marketing of Mr Goodbar as a healthy meal was successful, and by the mid-1930s, Mr Goodbar was making profits that were ten times the company’s payroll. This is quite impressive when you consider that the bars originally sold for 2-5 cents each! This candy bar that Milton Hershey had once been ashamed to associate with his brand had helped to save the company in one of its darkest moments. The success of Mr Goodbar during the period after the depression alone likely cemented the long-term standing of this candy bar with the Hershey company, but it’s continued marketability when sold as mini bars at Halloween has also helped to keep the candy bar in the stable for years.

In 1995, the formula was changed to add more peanuts. In 2008, the Hershey company also replaced the cocoa butter in the recipe with a cheaper oil substitute. This means that the candy bar can no longer be described as being a milk chocolate bar, and the wrappers were adjusted to show this change. There are still boxes of bars out there that you can buy that state that they are made with milk chocolate, but many of these are quite old or are being sold from foreign markets where there might be changes to the ingredients of the bar. 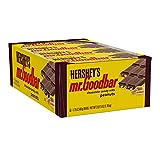 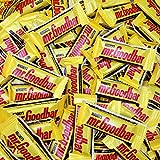 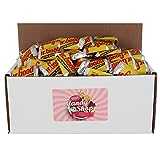 You can also buy Mr Goodbar at Old Time Candy by clicking the image below.

This is not a candy bar that will be a good option for vegans, for those eating Kosher, or for other dietary restrictions. Hershey’s also states a simple heat warning on the labels of these candy bars since the recipe of this candy is prone to being heat sensitive. Candies made with gelatin can be quite prone to melting in the heat, so you will need to be sure that you store your Mr Goodbar out of the sun and in a cool place if you want to enjoy it without it melting.

This candy bar comes in 1.75-ounce bars, 2.6-ounce bars, a large 4.4-ounce bar, and even a giant 7.13-ounce bar. You can also get these bars in a six-pack, and they can be found in all of the Hershey’s mini bars assortment packs. There are no other flavor options within this candy bar variety, but that is also standard for Hershey’s products. This company tends to stick with something if it is working, and there has not been any need to make further varieties of a classic bar that everyone already loves.

This is one of the few bars in the Hershey’s lineup that comes with so many different size options. Most of the classic bars are offered in a variety of sizes like this, while the newer products might not be. This is partially because of the traditional marketing scheme, which was done with a variety of unique sizing choices and Hershey’s loyalty to brand traditions.

An anti-bullying ad that Mr Goodbar made in the 90s:

A candy shop video with a taste test: