Rice candies are a staple of Asian candy markets, and they have become popular in the United States as well. There are various makers that offer this kind of candy in Japan and other locations where rice candy is popular, but one of the most recognizable brands of this style is Botan. These are considered the best example of this kind of candy that you can sample if you have never had rice candy before.

This candy style has been around since the early 1920s, and it is remarkably simple yet satisfying. The exchange between Japanese candies and American sweets was established during this time period when trade between Japan and the US became more common. While Japan became excited about American chocolate candies, rice candy became popular in the US.

Botan Rice Candy has been around since 1924. Botan ame is the specific candy type, and these are soft and chewy little sweets that are citrus-flavored with an outer layer of rice paper around the candy. This outer layer is called the Oblaat, a detail that not many people are aware of. The rice paper wrapper helps preserve the shape of the candy and protect it from melting when the weather is warm.

The rice paper can be consumed, and it dissolves in the mouth rapidly. This is a common feature of rice candies of various kinds, and many people love this unique little feature of the way that these candies are made. If you don’t like dry items like rice paper, you can simply strip this layer off and eat the candy it is protecting alone. It can be tough to strip all of this material off the candy in some cases, but if the candy has not gotten hot, it should peel off. It might stick to your fingers and become mushy if your hands are moist or there is moisture in the air.

This particular rice candy was invented in 1924 by Seika Foods. This was the time period when western sweets were entering the Japanese candy market. The creation of the rice candy of this style was thought to mimic the caramel that was brought over to the Japanese market with Western snacks. The flavor is not like caramel, but the texture is approximate. These are definitely citrusy and fruity treats, and they are nothing like caramels in anything other than textures.

Japanese companies sell these candies under the name Dagashi, and they have long been cheap and affordable treats that everyone could enjoy. This product is marketed particularly toward children in Japan, and the small size of these little candies is thought to be due to the need to market to small children. The original rice candies were also packaged in bright and colorful wrappers that were intended to appeal to kids. The packaging of these candies continues to be colorful and bright and is likely mostly targeted at children. Although from the perspective of US audiences, the cartoon-like nature of the designs will always feel like it is for children, even if this was not the intention of the brand.

The packaging of Botan Rice Candy is really iconic and has remained unchanged for years. The US uses the same packaging as the Japanese products in many ways. The importing of these products from Japan is done by JFC International. JFC sells their rice candies in a small cardboard box which each contains 21 g of candy. Botan means peony, which is reflected in the flavor of the candy, and there is a peony blossom on the label to reflect this bond. There is also an inu-hariko, which is a dog-shaped traditional toy for Japanese children on the wrappers.

This candy really established itself in the US during the 1970s. The children who were fans of this candy back then can still get this lovely treat as adults, but they might have to order it online since this candy is not offered in most cases in regular grocery stores. The Surprise toy inside each of the candies was a big hit in the 1970s, and this feature still remains a part of the marketing of this candy in the US as well as Japan but in the form of a sticker. The expense of including toys in the packaging was not sustainable long-term. 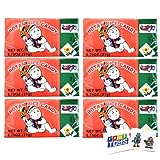 This is a really basic recipe for a candy. In the US, this is the recipe:

The recipe in Japan is as follows:

For the candies that are made with millet jelly:

The US version is Vegan and Gluten-free, which makes this a great choice for those who have allergies of various kinds. There are few candies that are so allergy safe and this is a great and simple choice for people who have trouble enjoying sweets most of the time.

Other Variations of Botan Rice Candy

Seika Foods also makes some other versions of this candy that may or may not be available in the US. These different styles of this candy are usually mostly just different in flavor, but there can be a certain consistency difference between different varieties of this treat as well.

These different flavors and styles are not available all over Japan either, so these might be snacks that you cannot always get access to if you are looking to try them. Specialty candy shops might be your best bet if you want to give these alternate products a shot. The flavoring can be quite different, as can the texture for some of the other versions of these rice candy treats that are much more popular in Japan. The US has not entirely embraced this kind of candy which means that these other alternatives are not imported to save money and time.

In Japan, there is not a huge marketing effort for this candy as it is such a well-established treat for children. The boxes that are made for the various companies that offer this kind of candy are almost always cardboard, and they might show the peony, Japanese characters, or other themes that are related to the citrus flavoring of the candy.

The original boxes of the treats had an included toy, and this was carried over to the US products as well in the 1970s. These toys have since been replaced with stickers, but the stickers are of nice quality and can be really fun to collect if you enjoy these treats often enough to build up a collection. School children love sticking these to items that they carry around all day, like their backpacks or binders and other items that can be personalized readily with stickers.

When you are looking for Botan Rice Candy, you will want to be sure that you look for a simple and colorful box that shows a Japanese child, the name Botan Rice Candy across the top of the box, and then some other images. Sometimes there will be toys on the front of the box, and a peony flower or a toy dog might be the central image on the box.

The interior rice papers might be plain, or they might also have some colorful striping and the candy name on them. Both kinds of rice paper can be eaten, so you don’t need to worry about this other version of the marketing of the candy if you should happen to order online and be surprised that the wrappers of the candies look like this.

Botan Rice Candy has almost always made their candy boxes to be orange and green, but there are some versions of the candies that are sold in boxes of other colors. The division is almost always ¾ one color with an end cap that is the second color. There are many other styles of candy boxes out there, but this is the main way that Botan sweets are sold.