Soup is the perfect warming treat when you need something simple and comforting. While we can make homemade soups, there are several pre-made soups out there that are absolutely delicious and oh so convenient as well. One such option is Campbell Soup. This classic soup company has been around for a very long time, and they must be doing something right.

Take a look at this quick overview with everything you should know about Campbell Soup.

Campbell Soup is a canned soup company that has been in business since 1869. That’s more than 150 years of creating tasteful, delicious, and simple soups that your family can depend on. Whether you need a quick and easy dinner, something to warm you up from the inside out, or even a solution for a sick family member, Campbell’s has solutions for you.

The primary headquarters for Campbell’s Soup is in Camden, New Jersey in the USA. While they are most known for the Campbell’s soups, they also produce products like V8, Pepperidge Farms, Pace, and more. While our focus is on the soup platform, it’s very clear they have skills far beyond just soups as well.

They are most clearly known for their soups and that is what their original brand production always was as well. With the addition of several other brands and products, this company has become one of the largest processed food companies across the United States. The majority of foods are canned goods but there are also meals, baked goods, beverages, and a variety of snacks under the umbrella of Campbell Soup Company.

Campbell’s soup specifically has always been known for their classic red and white label on all of their soup options. It’s a simple label that is part red and part white and has Campbell’s written across it. Andy Warhol even made a series of art that was the Campbell’s soup can prints.

The original creator of Campbell’s Soup was Joseph Campbell. Before he started the soup and food company, he was a fruit merchant. Initially, the company made canned tomatoes, veggies, soups, minced meats, and even jellies. Joseph only stayed with the company for about 10 years, but his son remained a part of the Campbell’s brand, working as a creative designer and creating the classic red and white labels that we know.

Ownership changed hands among the family several times and eventually left the Campbell family completely. However, the Campbell name remained. It was under different ownership that the company rose to one of the largest food companies in the world. They also became a public corporation and heavily expanded the brand umbrella.

The company has always been strong in the advertising industry. They have held some incredible spotlights through the years, including Campbell’s Kids. They also were not shy about sponsoring as a brand. Eventually, they opened and spread to several other plants in the US. The original plant actually ceased production in 1991 and was demolished in the same year.

Several other plants also closed over the years, and thousands of jobs were affected in those timeframes. However, Campbell’s also offered hearty severance packages and benefits continuation to each of those job holders. They simply were reorganizing production in certain areas.

The company has continually experienced growth and while Campbell’s Soup remains at the forefront, many more brands and products are now a classic part of the brand as well.

When Was Campbell’s Soup Invented?

Campbell’s Soup was one of the initial creations of the Campbell brand. It has always remained an iconic part of their offerings and there is nothing that gives any indication this will be changing. They’ve even added several different types of soups and continue to build out Campbell’s Soups as well as other parts of the brand.

Now, you will find chunky soups, ready to heat, and so much more on the market. Campbell’s soup itself was part of the original products created when the brand came to life in 1869. It has been running strong ever since and the soups continue to be a favorite go-to for many.

Campbell’s Soups are owned by the umbrella company Campbell Soup company. We mentioned earlier that there are a number of other brands now held under this umbrella as well.

The original owners had a whole different name for the brand and while Campbell’s soup has never changed names, ownership has drastically changed through the years. Initially, the owner was Joseph Campbell under The Joseph A Campbell Preserve Company.

From there, the name of the company changed to Joseph Campbell & Co. Reorganization and name changes continued to happen. In 2007, Godiva Yildiz Holding was the owner. Of course, Campbell Soup has also made its own acquisitions as well, leading to the compilation of multiple brands.

While ownership has changed hands from company to company, the official ownership still resides under Campbell Soup Company. It’s now a public company as well.

How Did Campbell Soup Get its Name?

The name is quite easy to explain. The original owner of the Campbell company was Joseph Campbell, so it made sense to use his own name in the branding. Despite multiple family and ownership changes, the name has always stuck, and the soup remains Campbells as many have known and loved it more than 150 years.

The Campbell family no longer has any type of ownership or business interest in the brand, but the original naming convention remains, leaving this a longstanding processed food that is almost unrivaled in longevity and solidarity.

The name continues to carry forward with the brand. There is little question that it will likely remain a significant aspect of the brand and they are going nowhere anytime soon. 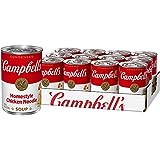 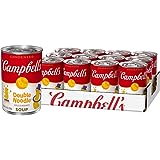 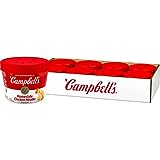 Campbell Soup is a huge brand that has tons of flavors and varying options to choose from. Here is a quick list of the different varieties available under the brand.

This doesn’t even really touch on the different flavors. We could make a guide just on the endless array of flavors out there. From classics such as chicken and noodles to tomato soup and just about anything you can think of in between.

Of course, don’t forget about the additional brands like V8, Pepperidge Farms, and more as well.

Campbell’s Soup is part of a much larger brand than just soups. However, the soups were one of the original products and continue to be one of the most popular parts of the brand as well. There is so much to enjoy here and no matter what your flavor preferences are, they likely have something for you.

From a simple family-owned food business to one of the top food companies in the world, that’s quite a story and an eventful 150+ years of history.