For those who love chewing gum, getting to try various unique products can be a real treat. There are so many chewing gum products on the market that you might have to work hard to get to experience all of them. There was a time when chewing gums weren’t as popular, and most of them were intended to cure “nervous” habits or to improve the breath. Many of the old chewing gum products that first hit the market have long since retired, but there are some unique older gums that are still being sold.

Hollywood Chewing Gum is one of these older gum products that are still around, and it has not changed much since the first batches were rolled out to people in the early 50s. This is actually a French product, and it can be hard to get in the US, but you might be able to buy from an online seller to try it out if you are in the US.

This product was first sold in 1952 in France. The maker of the gum was a GI who had settled in France after WWII. Chewing gum was not very popular in France until the war. American soldiers were given gum as part of care packages, and it was also handed out as part of their rations. These products were shared with French people living near the frontline.

After the war, there was a new demand for chewing gum in France, but no one to make it. This was the void into which Hollywood Chewing Gum stepped, and this product was able to fill a need that had yet to be met in post-war France. French villagers had sometimes been holding onto the gum that they had been given by American GIs when their towns were liberated as souvenirs, and they were very excited to be able to buy products in the same style for the first time after the war ended.

Hollywood Chewing Gum is still the best-selling gum in France, and France is second after the US in gum consumption all over the world. The current flavors of this unique older product are Spearmint, but there are also some packs that are sold in fruit flavors like Strawberry. The French word for Spearmint is chlorophylle, which might remind some people of science class, and this is often one of the things that Americans have questions about when they buy some of this gum to try.

The gum was originally sold under the slogan, “Fraîcheur de Vivre”, which means “Freshness of Life”. Gum was associated closely with luxury and the American way of life when it was first sold in France, and this slogan was intended to help communicate the luxuriousness of gum products to French consumers. While this is likely not a connection that is made with gum today, there is no denying that this particular gum product continues to be very popular in France.

Some of the current ads do focus on the glamor that is supposedly connected with American life, but most of the more recent ads are sort of zany and off-beat and include cartoon garden gnomes and other silly characters. Most of the ads from the 70s and 80s focused on Americans doing active outdoor things or exciting adventures while sharing the gum between the people in the group. The connection between the gum and a unique and special way of life that is exciting and adventurous was clearly stated in these ads.

There are variations of Hollywood Chewing Gum sold in France that you might not be able to order in the US. There is a version called, `Hollywood Blancheur” that is meant to whiten teeth, and there is a sugar-free variant that is called Hollywood Light. Shopping for any of these variants can be a bit hit or miss for US consumers, so you might only find the original version, or you might only be able to access these unique spin-off variants of the gum when you are shopping.

Hollywood Chewing Gum is advertised in almost the same livery that it was originally sold in. The packaging is green with a slanted logo declaring the brand name on it. The Spearmint version states that it is “chlorophylle” flavored, and there is a red end-cap on the package that says how many sticks are in each package. There are some versions of the gum that are sold in blue packaging with a simplified and more modern red logo on a white background. These newer packages state that the flavor is Parfum Menthol and that the gum is the “classic” gum on the red end cap.

There are few packaging options that seem to be complex or colorful for Hollywood Chewing Gum, which proves that the name recognition of the brand is enough to make sure that the gum gets noticed and secures sales. In the US market, this very plain livery might not make a big enough impact to generate sales. European markets are not as interested in bright colors and loud labels, however, which might be the sole reason for the simple packaging of the product.

Cadbury, which is currently owned by Kraft, owns Hollywood Chewing Gum these days. They have a well-established presence in Europe and make many variants of American products there under different names. This is one of their best-selling products, but there is less competition in the French gum market than in the US market, which might be why this product is not sold in the US at this time. The recipe might also be an issue because of the adherence to European food standards with regard to fake sugars and other ingredients that are allowed in American food production but are not allowed in Europe.

The recipe that is used to make Hollywood Chewing GUM still includes real sugar, which is in keeping with the requirements that Europe has placed on food products over the last fifteen years or so. Artificial sweeteners and ingredients are not allowed to be present in many foods that are sold in France. This makes for a different flavor experience when you chew this gum, and it is one that many people prefer. The taste of artificial sweeteners gives gum that is sold in the US a unique flavor that cannot match the sweetness and smoothness of the real thing. The only downside to this flavoring method is that the flavor does not last very long.

Many people liken the chewing texture of Hollywood Chewing Gum to Chiclets, which is another older gum product with a tried-and-true recipe that has not changed much over time. Being able to enjoy gum that would have been popular so many years ago can be a really fun experience. Many people enjoy trying out these products that have been around since the mid-20th century, and you might want to add this gum to your list of unique things to try out at some point. For those traveling to France, this will be an easy must-do item to check off the list since this gum is sold in many places. 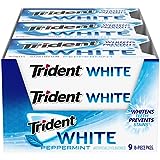 From an entry for a French online store for the Hollywood Chewing Gum Light product:

The brand does make a note that the light version can cause gastric issues if consumed in large quantities due to the sorbitol and xylitol in the recipe. The regular version of Hollywood Chewing Gum does not include the same quantities of these sweeteners to pass the French food standards that are in place for most products. The fact that there is a light version of the gum sold today might indicate that some of these sweeteners have been added to a list of allowed products that were not available for use before.

A lot of the ads that have been used to promote Hollywood Chewing Gum since the 80s have actually focused on Americans or the perception of Americans doing things like hiking, climbing rock walls, and living a luxurious life. The ads sometimes feature kids as well as adults, but the message is always pretty clearly focused on the glamor and excitement of American life. This might seem a bit odd to modern audiences, but it was a key aspect of the marketing efforts that were used to promote this gum for much of its early history.

Some of the more recent ads are pretty eccentric and include adventures with a garden gnome, among other odd things. Candy and gum products are often advertised to modern audiences in this off-beat way, so this change is in keeping with the zany and unique ways that this kind of product is often advertised around the world.

A strange ad for Hollywood Chewing Gum with a garden gnome in it:

Another ad featuring the Statue of Liberty:

A Hollywood Chewing Gum commercial from the 80s: