Razzles are a unique snack product because they actually fall into two categories – candy and gum. At first glance, this may not seem that impressive, there are other items that have candy and gum together, like the popular Charms Blow Pops, but these were different. YouYou did not eat the candy to get to the gummy center, enjoying each category of snack separately, no. Razzles start out as candy and then turn into gum.

If an adult reads about this fantastic product, it might not seem too appealing to you. However, for children and teens, this was a super cool concept, one which was fun and unique. Fruit flavors, colorful packing, and candy/gum pieces also attracted youth to Razzles.

What is a Razzle Anyway?

Now that you know what these fun candies are, you might be wondering how they got such an interesting name. The name Razzles is actually named after a fictional berry. As many non-chocolate sweets have fruity flavors, the creators of Razzles wanted these candies to stand out among the crowd of fruit-flavored candies. So the name is based on a fictional berry called the razzleberry.

Initially, it would only come in raspberry flavor to go with the name. Of course, over time, they introduced many different fruit flavors. For instance, the variety multi-pack of Razzles candy had raspberry, orange, lemon, grape, and blueberry. For purists, Raspberry would always remain the favorite flavor.

Fun Contests and Advertisements Along The Way

Razzles were invented in 1966, and back then, advertisements were a lot different than they are today. Much of the advertising was done in newspapers, magazines, and radio commercials. Eventually, television ads would follow.

A few years after, the original rollout campaign for this candy included a contest to win walkie-talkies, and this contest spanned the timeframe of 10 months. They gave away 10 walkie-talkies a month for 10 months for a total of 100 prizes. This contest happened from 1968 – 1969. This was called the “I Like Razzles” Contest. To enter this contest, you had to mail in a wrapper of Razzles (to show proof of purchase) and tell the company why you like Razzles in 30 words or less.

In 1972, they had a similar contest. They were still looking for people to send in a wrapper and answer the question “What are Razzles” in 30 words or less. This time they were giving various prizes, including a Hi-Rise Bike. They advertised that new prizes would be awarded monthly through December 31, 1972.

Tootsie Brands owned both Dubble Bubble and Razzles candy, so the Razzles packaging started advertising Dubble Bubble products. For instance, on the 1974 packaging for Razzles, showed the back side of the package advertised a Dubble Bubble t-shirt that you could order in children’s or adult sizes. You just had to send in 2 wrappers and $1.50. A few years later, the back advertisement changed to getting a kids-sized Dubble Bubble tennis racket cover. It was red, white, and blue with a zipper and could be received for only $1.25.

In 1983, they started doing contests again. This time they were giving away a Sony Recorder (and other big prizes). The contest advertisement said they would give away new winners every 6 months (January 15, 1983, and July 15, 1983).

With the success of contests giving away large prizes, they really topped every contest they had ever had before in 1984. This was the same type of contest – telling them what Razzles are in 30 words or less, but this time the main prize was not walkie-talkies, a bike, or a Sony Recorder. No, the main prize was a trip to Disney World and Epcot for a family of 4. This contest also advertised 500 other possible prizes, including bikes, Sony Walkman radios, and a $5.00 weekly allowance for a year.

In 1985, they introduced a new contest. This was a collect-and-win contest, where you had to collect the letters to spell the word razzles to lin prizes. You could enter as many times as you wanted to. Winners would be determined by random drawing. The prizes were:

They repeated this contest again in 1986.

As you can see, over time, Razzles used contests with proof of purchase to help advertise and market their product. As time went by, the prizes increased in value, showing that this type of marketing was lucrative for this brand.

Packaging and Flavor Changes Throughout Time

Over time, the packaging changed dramatically, as did the flavors in which this candy was available. Initially, it was only available in Raspberry flavor, and the packaging was a little simpler – showing cartoon faces and the pink raspberry candy pieces. By 1972 the brand expanded to include assorted fruit flavors (raspberry, grape, orange, lemon, and cherry). The packaging was essentially the same, except they added different colored candies to the design.

In 1975, the packaging became more modern. The entire design was changed to show cartoon versions of the fruit flavors – raspberries, grapes, lemons, cherries, and oranges. The lemons and cherries also had cute cartoon faces. This was a more bold and more colorful design than before.

By the mid-1970s, they introduced Sour Razzles; these were the same fruit flavor but sour. The packaging was similar, but the primary color was green instead of white. This design depicts the raspberries, oranges, and lemons as sour or shocked faces.

In 1981, they introduced an Ape Sized variety, which may have been one of the most fun packages. It showed a cartoon ape with red eyes chewing down on a huge Razzle. In 1983, they introduced Double Thick Razzles. The design was cartoon drawings of the actual candy which showed the extra thickness of each piece. As the 1980s were the beginning of different flavor experimentations for many candies, Razzles also introduced a Tropical Flavor in 1985.

In 1989 they redesigned the packaging again; this time, the package was white with what appeared to be a computer-generated photo of the candies. It also listed the four current flavors available (Raspberry, Orange, Lemon, and Grape). The sour version was called Tangy Fruit.

By the mid-1990s, they changed the package to an ombre blue background and a more comic version of the candies, giving them a 3D appearance.

Finally, in 2010 they changed their packaging one last time (for now, as they are still being made, and it is certainly possible that they will redesign their packaging again). Razzles currently offers three variations – Original, Tropical, and Sour.

Tropical Razzles has a 3D light orange and dark orange packaging. It also has a sun with sunglasses as the O in the word tropical. The background of the word tropical is tropical blue sky blue. Finally, the packaging is decorated with two palm trees and a cartoon Toucan Bird. The packaging, just like the original, says, “First It’s Candy…Tropical Razzles…Then It’s Gum.” The five flavors in this package are pineapple, strawberry banana, tropical punch, tangerine, and kiwi lime. 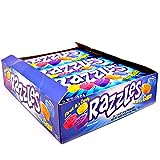 If you are looking for a selling point on the value and power of science, there is no need to go any further than Razzles. In the 1960s, when this candy was created, it was groundbreaking. So it should be of no surprise that the candy inventor was a chemist, as not just anyone would understand how to create a product that starts as candy and then turns into gum.

The inventor of Razzles is a chemist from Pennsylvania named Robert C. Bucher (1911 – 2008). Who won the patent for Razzles in 1963. Before this, he worked as a research chemist for Dupont and the Fleers, Inc.

The fact that he won this patent is impressive in itself as he had to successfully argue the point of how this candy turns into gum, but how it is not just gum. Gum can not be patented (as it is already a created entity and is common). So he not only had to design a product that turned from candy to gum but design it and explain it in such a way that the product is a novel (or new) product.

He was successful in this and was given the patent.