Have you ever had a really great time with those funny-looking candy teeth that you can wear? You find them a lot around Halloween. But what if we told you that you can find wax lips to have a ton of fun with and they are a candy too!

Wax Lips candy is something that has been around for a very long time. It’s incredibly unique and while they are fun and popular, finding information about them is certainly a challenge. Take a look at what we did find below!

There are several different brands and companies out there that make these fun wax lips. Since it’s something quirky that isn’t always popular or always available easily, it’s also harder to find details about it. However, what we did track down was interesting, to say the least.

What history can be found traces wax lips candy clear back to some of the earliest years of the 1900s. That being said, we couldn’t pin down an official year for the candy. It’s also challenging to know the story of every company that offers them.

While wax lips candy was originally invented by the American Candy Company to our knowledge, there are other companies that make some sort of similar product as well. That company’s production is known as Wack-O-Wax.

Wack-O-Wax as we know it is still around today. We’re missing close to 100 years of the history of the candy but we know that the American Candy Company partnered up with Tootsie (as in the Tootsie Rolls industry) in 2004. There they have remained since then and continue to be sold under the same name as they always have.

Wax lips have always been about the fun of playing with your food. In fact, that is the slogan that they continue to use. You might also see them advertise with things like “play now, chew later”. It’s a similar concept either way.

This candy is shaped to look just like lips. They use flavored paraffin wax, which is food grade so it is edible. They were a lot of fun because not only could you play with them but you could hold them as part of your own lips. They even had a little bite area on the back so you could hold them to your mouth for play.

What most people remember is the hilarity of wearing these lips and talking. Or simply goofing around with their friends and everyone wearing these big and silly red wax lips, Of course, the flavors were fun too.

These have always been popular close to Halloween and now that is when you are most likely to find them in stores. They can be found in some candy stores year round but they come out in full force close to that infamous costume season.

Throughout the years they have been known to be enjoyed as gag gifts, Halloween treats, and just for fun with friends. The paraffin wax that is edible makes them something similar to chewing gum. However, the majority of people just play with them and then toss them when they are finished. They are rarely eaten or chewed like gum.

According to some of the old history and tracking, these wax lips were most popular beginning in the 1970s and spanning close to the 2000s. However, they’ve been on the market much longer and continue to be there now.

In 2002, Concord Confections took ownership of the American Candy Company and put a patent in on the proprietary lip design that was part of Wack-o-Wax lips. We’re not sure when the Wack-o-Wax name really came into play or whether they used this branding all along. However, we do know that the original lips from American Candy Company are now sold by Tootsie and under this name.

When Were Wax Lips Candy Invented

Since there are several different brands that create some form of wax lips candy, it’s impossible to track when they were all invented or even if we know for sure who the first ones were who invented them. However, we do know that the primary brand was invented in the very early 1900s. This puts them at more than 100 years old.

We’re not sure the exact introduction year but we know it was in the first decade of the century. They maintained under the American Candy Company for right around 100 years before changing hands.

It was nearly 70 years before they hit a major spike in production, which was their best-selling timeframe. However, they must be doing ok both before and after those spikes since they continue to be sold and available, particularly around Halloween time.

Tootsie Roll Industries now owns these wax lips candy and they are sold under the branding of Wack-O-Wax. Tootsie only just acquired the company in 2004, which means they have owned them for less than 20 years.

We know that Wack-O-Wax is the name they go by now but we are unsure if that was the name of the lips from day one or whether Tootsie provided that name and branding to the lips and further lines of candy that fall under a similar guise. 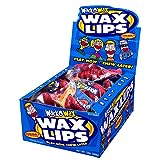 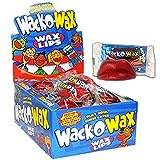 You can also buy Wax Lips Candy at Old Time Candy by clicking the image below.

Now, wax lips candy is sold under a brand known as Wack-O-Wax and over the past couple of decades, this brand has continued to expand. The one thing we want to point out is that this candy isn’t really about flavor. They are all about the fun and the style.

So, while there are a few different options besides just lips, the flavors are almost irrelevant. They are all flavored wax but very few people actually get this candy to enjoy the flavor. They get it to play with their food. Some people will suck on the wax and enjoy some of the flavors but most people play and then toss it out.

Here are the current options in the line of Wack-O-Wax products.

These are all pretty self-explanatory by the name. They are all designed for fun and play.

A Little About Tootsie Roll Industries

Tootsie has a longstanding history and they are known for a lot of classic candies that have been loved for more than a century. The company itself was founded by an Austrian immigrant in 1896. The company was originally developed when Leo Hirshfield wanted to create a chocolate candy that didn’t melt.

Of course, this is where the Tootsie Roll developed from, named after his daughter, whose nickname was Tootsie. Back then, the official name of this candy company was The Sweets Company of America. It wasn’t until 1966 that they changed the name to Tootsie Roll Industries.

Wax lips candy can be a lot of fun. It’s something that you will see around a lot during the Halloween season but you can find it in a variety of stores and online locations all year as well. This candy is the type of candy that was truly made to play with and very few people actually eat or chew the candy.

It certainly brings a whole new meaning to the concept of playing with your food!