Cracker Jack is currently made by Frito Lay, but this great snack has been around for more than 120 years. Almost everyone has had a box of Cracker Jack in their life, and most people could not wait to get to the bottom of the box to find the prize inside. Sometimes, especially children, would look for that prize immediately, or even open the package from the bottom! If you also have fond memories of Cracker Jack, you may want to learn more about the history of this iconic snack.

Cracker Jack was initially invented by Frederick “Fritz” William Rueckheim, a German immigrant. Although he is listed as the inventor, he worked on creating this snack with his brother Louis, which they decided to mass market to the public. Their company name was the F.W. Rueckheim & Bro Company.

This popcorn and nut snack debuted at Chicago’s World Fair in 1893. It was among good company that year as several other world-famous things debuted at that fair, including ice cream cones, Aunt Jemima pancakes, and the Ferris Wheel.

Even though it made its actual debut in 1893 at the Chicago World Fair, Rueckheim had been selling popcorn on Fourth Avenue in Chicago since 1872.

Although today, this popcorn, peanut, and molasses treat are known as Cracker Jack, that was not always the case. In fact, It was initially introduced as “Candied Popcorn and Nuts.” How this snack eventually got its name is not 100% known, but like all great products, a legend or myth is attached to it. There are actually two.

It is believed that the name came from the fact that the words cracker jack was slang at the time, and the definition of cracker jack was something excellent or pleasing. However, the fun story around the name origin is that a customer ate some Candid Popcorn and Nuts and exclaimed, “That really a cracker – Jack!”

When people think of Cracker Jack, they picture the sailor boy and his dog. However, even though that is the mascot that lasted the longest (and one which has personal meaning for the partners of the company), it was not the first. Original, Cracker Jack Boxes depicted two bears. Not just two bears, but friends who did everything together like bears playing baseball, fishing, or even climbing the Statue of Liberty!

Eventually, these two cute bears were replaced with more meaningful mascots. The Mascots chosen for this brand have a personal meaning to the owner. The sailor boy on the box is named Sailor Jack, and he was designed or modeled after a real bow named Robert Rueckheim. Robert was the owner, Frederick’s grandson, and tragically he died at the age of 8 from pneumonia. Sailor Jack also can be seen with a dog named Bingo. Bingo was modeled after a dog that Hence Eckstein adopted in 1917. The real dog’s name was Russell.

Henry Eckstein is responsible for inventing the “Eckstein Triple Proof Bag,” which keeps the kernels from sticking together inside the box. Because of this and his remarkable invention, he became a partner in the company in 1902 (three years after his invention). The company changed its name to Rueckheim Bros & Eckstein.

Sailor Jack and his image were so important to Frederick Rueckheim that he had this image carved onto his tombstone. You can see this tombstone in St. Henry’s Cemetery in Chicago, Illinois.

In 1906, the company adopted its third name change, known as The Cracker Jack Company. This name stuck around for the life of these owners.

In 1964, Borden purchased Cracker Jack. Then in 1997, this iconic product once again changed hands. Since 1997 and through the current day, Cracker Jack has been a product in the Frito-Lay Family.

Cracker Jack Boxes Were Once New and Modern

In today’s day and age, looking at a box of popcorn and nuts might seem old-fashioned or even odd, as most snack food comes in air-tight plastic packaging. However, the Cracker Jack Box was actually innovative. When Cracker Jack was first sold in boxes, it was alone in this type of packaging. Everything else was sold in bags, metal tins, or glass jars.

Literally, if you just say the phrase the prize inside to most people, they will instantly know you are talking about Cracker Jacks and their wonderful prizes at the bottom of the box. However, would you be surprised to learn that customers did not always get a prize with their box of Cracker Jack?

Like almost all companies, businesses, and products, the packaging has changed over time. As previously mentioned, Rueckheim started selling what is now known as Cracker Jack on the streets of Chicago in 1872. In 1893 it was introduced at the World Fair in Chicago. In 1910, they added coupons to the inside of each box of Cracker Jack. These coupons were for items that adults would enjoy, especially women. These coupons could be collected and later redeemed for things such as sewing machines, silverware, watches, and other goods.

However, this practice only lasted for 2 years. The company decided to take its marketing in a different direction; instead, they focused on children. At this time, they replaced the coupons with a small prize in each box. The result? Sales went through the roof, proving that marketing to a nation’s youth could be very profitable indeed!

The Prize and Culture

The prize inside Cracker Jack’s box has tons of cultural references. Not on references in popular culture, but there are literal books written on this topic. Collecting toys in a Cracker Jack box became serious business. Although toys and prizes made their debut over 100 years ago, there is still a Cracker Jack Collectors Association, and they even have yearly conventions!

You can also search for books that list items and show photographs of different prizes that have been given away over the last century. Some of these books even have price guides for each collectible.

One of the more interesting mentions of Cracker Jack in popular culture came in the Show One Tree Hill. One Tree Hill was a drama in WB, then the CW from 2003 – 2012. In the show’s third episode, one of the main characters, Nathan Scott, opens a box of Cracker Jack and gives the prize to his tutor, Haley James. On the show, Haley was best friends with his half-brother and current enemy, Lucas Scott.

Although this Cracker Jack scene is very early in the show’s run (episode 3 out of 187 episodes), it plays a significant part in the show, specifically in the relationship between Nathan and Haley. That scene was recreated during rocky times in the show; she always wore it, it was a meaningful keepsake, and finally, in the series finale, Nathan gave Haley a present – a diamond bracelet – which he put in a Cracker Jack box. As you can see, this is not just a one-off mention of the brand. Still, a popular teen drama literally built a whole relationship around the prize in a box of Cracker Jack.

No history of Cracker Jack would be complete without showing the connection between this timeless snack and America’s Pasttime, the sport of baseball.

In 1908, Cracker Jack got the break of a lifetime. This is when Vaudeville Actor Jack Norworth (29 at that time) wrote the iconic song, Take Me Out To The Ball Game. If you do not know any trivia about this song, you might be surprised to know that he wrote this song while riding the train to a gig in Manhattan. Also, it was inspired by an ad he saw for Polo Grounds, which was the baseball field at which the New York Giants played.

Even though this is an incredibly popular song linked to baseball and Cracker Jack, the songwriter had never been to a baseball game when he wrote it. Also, in today’s market, you would assume that a song with lyrics, “buy me some peanuts and Cracker Jack,” was undoubtedly part of an advertising deal with the company; it was not. He wrote this song on his own without any company interference. However, they made out like bandits. This song started climbing the charts. Suddenly, no one wanted to watch a live baseball game without enjoying a box of Cracker Jack.

Besides the song, Take Me Out To The Ballgame, Cracker Jack has also been associated with baseball in other ways. For instance, in 1914 and 1915, Cracker Jack offered a collectible set of baseball cards. These cards feature the stars and up-and-comers of the day, including Christy Mathewson, Ty Cobb, “Shoeless” Joe Jackson, and Honus Wagner. Today, a full set of the 1914 or 1915 collection can fetch $100,000. The most valuable single card in these sets is Christy Mathewson, and a mint Mathewson card can go for as much as $40,000.

Finally, the NY Yankees learned that if you want to upset your fans, replace Cracker Jack with a comparable company in the stadium. In May of 2004, they did just this. Cracker Jack was no longer offered in boxes, so they decided to switch to Crunch’ N Munch, stating that they believed Crunch’ N Munch was the superior tasting popcorn snack. Apparently, their fans disagreed. There was so much backlash to this decision that within one month, the Yankees organization switched back to Cracker Jack. 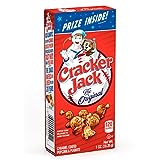 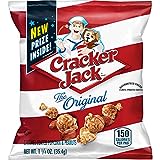 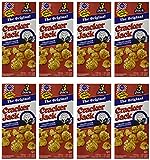 You can also buy Cracker Jack at Old Time Candy by clicking the image below.

What are Cracker Jacks?

Cracker Jack is an American brand of snack food that consists of molasses-flavored, caramel-coated popcorn, and peanuts, well known for being packaged with a prize of trivial value inside.

What is in Cracker Jacks?

What is the name of the dog on the Cracker Jack box?

Cracker Jack’s mascots Sailor Jack and his dog Bingo were introduced as early as 1916 and registered as a trademark in 1919.