The perfect blend of chocolate and mint, you really can’t go wrong with an Andes mint. Have you ever tried these? They’ve been around for a lot of years and the flavors of the layers of mint and chocolate meld together to make the perfect combination.

Andes Mints have a long history of success. It all started at Andes Candies and they really date back to the 1920s, although the official Andes Mint is not credited until 1950.

Andrew Kanelos of Chicago owned a little candy store in the area in 1921. He began to open more candy locations but all of his candies were Andy’s Candies. The stories say that he realized men didn’t want to give the women in their lives another man’s candy.

He altered the name to be Andes Candies so it kept the general idea of the name intact but transitioned it so it didn’t seem like the candies came from Andy. It was a thoughtful change and it didn’t cause confusion about the name or brands.

Those stories make us think that Andes mints were around before the official release of them under this title. However, the known timeframe that Andes Mints were released as such was in 1950. They took off and they’ve been popular

The mint is then wrapped in a green foil wrapper that has the Andes company logo on it.

If you’re familiar with Olive Garden, there has been a common question as to whether or not their mints are actually Andes mints in disguise. While they are created very similarly, they are not actually Andes.

Andes Candies was sold to Interfood in 1980. This was a Swiss candy company. Andes later became part of Brach’s candy line and when Jacobs Suchard purchased Brach’s in 1987, he also acquired Andes mints. The company was later sold to Kraft General Foods in 1990.

Brach’s itself was kept under separate ownership but Andes was transferred. In 2000, Andes was sold to Tootsie Roll Industries and that is where they remain today.

These mints have always been considered an after-dinner mint but you can really enjoy them anytime you want to.

Andes mints weigh about 4.75 grams and they are only 25 calories each. They actually do have more than one size and the larger options are 9 grams each, with 47.5 calories.

There have been some spinoffs to the Andes Mint candy over the years. We will discuss some of those later in this article but you may be familiar with or even have tried some of them – like milkshakes.

When Was Andes Mints Invented?

Andes Mints under this particular title weren’t actually invented or produced until 1950. However, the candy actually had a longstanding history prior to that time.

Andy created Andy’s Candies in 1921 and these delicious mints were his candy. Unfortunately, he sold to a lot of men to take chocolates home to their significant others and the title “Andy’s Candies” became a problem with his market.

While the candy existed long before 1950, Andes Mints as we know did not officially come into production until 1950. They are thought to be the candy that was known as Andy’s Candies prior to that time but the name change and rebranding happened in 1950.

At that time, they used a green foil wrapper, imprinted with a picture of mountains and the word Andes to wrap each piece of mint chocolate candy.

This candy has always been popular and while it has changed hands a few times over the years, they continue to be popular and used for things like gifts or special treats. You might even find them on your pillow at some hotels.

Andes Mints were created by Andy Kanelos in 1921. He originally called them Andy’s Candies but later renamed them and rebranded them into Andes Mints.

Andy remained the owner of the candy until about 1980. He chose to change the name from Andy’s Candies to Andes Mints because he felt like the name of a man on a popular gift for women was a turnoff for his male customers.

Andes Mints are currently owned by Tootsie Roll Industries. This company has owned Andes Mints since 2000 so they have had them for a couple of decades now.

Andes Mints were originally owned by Andy himself as he owned a line of candy stores known as Andy’s Candies. He changed the name of the mints in 1950 but maintained ownership of them until about 1980.

In 1980, a Swiss company known as Interfood purchased Andes. This company later became Jacobs Suchard. Jacobs purchased Brach’s in 1987 and Andes fell under the Brach’s division at that point in time.

However, Jacobs Suchard was sold to Kraft General Foods in 1990 but Brach’s remained separated from that sale in 1990 so Andes remained with Brach’s and was owned by Klaus Jacobs. It wasn’t until 2000 that he sold Andes to Tootsie Roll Industries. He did so because he was in need of cash at the time.

How Did Andes Mints Get its Name?

We don’t really know the story about how Andes mints were specifically inspired. What we do know is that Andy Kanelos created this minty chocolate goodness.

These were originally called Andy’s Candies when he first created them in 1921. However, in 1950, the world was introduced to Andes Mints as we know them. The name was changed from Andy’s Candies to Andy’s Mints because Andy felt like more men would purchase the product if it didn’t look like they were giving their significant other candy from another man. 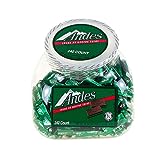 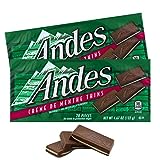 You can also buy Andes Mints at Old Time Candy by clicking the image below.

Interestingly enough, there have never officially been different flavors of Andes mints. However, there have been spinoffs and variations of flavors that were offered by Andes under the same guise.

Some of the spinoffs include things like ice cream, cookies, cake rolls, baking chips, and more. Andes Mints partnered with several fast food companies to offer things like milkshakes or even coffee with Andes as part of the mix.

Here are some of those.

Some of the special edition products and the spinoff flavors of Andes have been popular as well. They even had a Limited Edition Dessert Indulgence line that came out in 2007 with three specific flavors.

Here are some of the variations.

Andes Mints continue to be popular today and they are pretty easy to find. You can find them at a variety of retail stores as well as most candy stores, including old-time candy stores and other similar shops.

Places like Walmart, Target and other known retailers carry Andes Mints and some of the variations. You can also find them easily online from sites like Amazon, Old Time Candy, and plenty of other candy locations.

These are easy to find. Of course, you can also go straight to the source and find them at Tootsie Roll’s website. Here you can even buy them in bulk and find some of the different varieties and flavor options.