Charleston Chew is a chocolate bar with a nougat center that has been around for many years. This is one of the classic candy bars that many generations of people are familiar with. It has always had a loyal following despite its unique flavor profile and texture.

Charleston Chews are unique in part because they are fairly chewy and are focused more on texture than on taste. Many modern candy bars are more complicated than this candy bar and offer many flavors and textures. Charleston Chew has always been simple and straightforward and the bar has not changed much since it was first created to sell.

History of the Charleston Chew

The Charleston Chew was made in 1925 by the Fox-Cross Candy Company. This company was founded by a stage actor named Donley Cross and a friend of his named Charlie Fox. The candy was named after the Charleston dance which was very popular at the time.

Donley Cross was a stage actor and he actually turned to candy-making after he fell off the stage and hurt his back severely. He needed a new job and he thought that candy-making might be the right choice for his next career. The candy bar was not a huge hit at first, but it caught on and started to carve out a niche for itself. Perhaps the link to the very popular Charleston dance was a good way for the candy to promote itself. It does not appear that Cross did much to promote the candy in any way prior to its sale.

The company was bought by Nathan Sloane in 1957 and then sold to Nabisco in 1980. Sloane changed the candy after he bought the company and made it a chocolate-covered vanilla nougat bar. He also added new flavors in the 1970s. These flavors were chocolate and strawberry.

Before he sold Charleston Chew, Sloane moved production to a larger location in Everett and he automated the production. He also started to advertise the candy so that people know that it actually existed. He also made history by being the first candy maker to suggest that the candy could be preserved better and enjoyed in a new way if it was placed in the freezer.

To this day, many people prefer their Tootsie Rolls and their Charleston Chews frozen. This was not something that had been possible before the advent of home freezers, and this added a new novelty to the product that would not have otherwise been connected with it. People even began creating the “Charleston Crack” which was done by freezing the bars and then smashing them. The shattered bars offered small, nibble-sized frozen nuggets of candy that were just as good as eating the whole bar.

Nabisco sold the candy to Warner-Lambert in 1988 and then Tootsie Roll Industries bought it in 1993. This is the current owner of the candy and you can readily see the link between the flavor profile and texture of this candy and the Tootsie Roll line of products. They have similar chocolatey and chewy flavor profiles.

The candy is currently available in vanilla, chocolate, and strawberry. Over the course of being sold and trading hands, the candy was also made for a time in banana, grape, and cherry flavors. The company still offers mini Charleston Chews as well which have been around since 1998. There is also a Charleston Chew Small Bar which is a bit more standard-size candy bar when compared to the rather large traditional Charleston Chew.

Nougat candies are not very popular these days, but the blend of chewy and really good chocolate taste in the Charleston Chew has made it a lasting favorite. You can clearly see that there is a loyal following for this kind of candy experience since there are so few varieties of this candy on the market and because there have been no changes to the recipe since it was first sold in the 1920s. Many other candies on the market, including classic candy bars, have been revamped many times over to make them more appealing to modern candy enthusiasts.

This candy bar has been linked with some interesting cultural references and many people are aware that it exists not because of ads or other kinds of promotion but because of these more interesting connections made with the candy. One of the most common ways that people know about this candy is that it is often used to help demonstrate rheology to students in American science classes. Seeing the Charleston Chew used to help explain what soft solids make the bar stick out in the minds of many who might not otherwise have known it existed.

Eminem has even mentioned the candy in one of his songs and the Dungeons and Daddies podcast makes frequent use of this candy in their content. 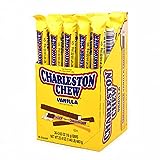 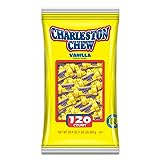 From the Tootsie Roll Official site

The flavoring ingredients will vary some when you are looking at the non-vanilla flavors. This is from the basic and classic bar’s ingredients list and not one of the other flavor varieties.

The original candy was sold in a gray box with a red font. This was not a long-lasting livery for the candy and even the early wrappers for this candy were dark brown with bright yellow lettering. Today, most of the packaging still appears this way but the minis are sold in bags that are yellow and you might see some color variations in the wrapping products for the secondary flavors.

The large candy bar is sold in yellow and blue wrappers with the logo in blue and white lettering. There are also some bars that are sold with red wrappers and blue lettering on them that suggest that you “try it frozen”.

The candies are also sold in Australia using the same method. If you are traveling to the UK or to Australia, you might see Charleston Chews sold in the recognizable brown wrappers with the yellow lettering that they are sold with in the US. This is not a very popular candy in the UK or likely in many other countries outside the US, so you might not want to plan on seeing it available if you are traveling to other countries.

The fact that there is no partnership to bring the candy over under a new name to these other countries speaks for the lack of a following in these places. Many candies that are more popular are sold with their own unique varieties in the UK and Australia at least. It appears that those who live in the UK or Australia end up ordering their Charleston Chews online and having them shipped directly to them.

Charleston Chew has been linked with some really clever ad campaigns over the years. The “Chewy Louie” ad campaign is a really memorable one that ran during the 80s and 90s. This is a really silly and fun campaign that features kings talking about the candy. You can see this ad here:

Campaigns in the 70s were more focused on the dance aspect of the candy and they often featured kids who played musical instruments that looked like the candy bar. This was also the time frame where a version of the candy bar that was even bigger than usual was offered. This was called, “The Biggie” and was supposed to attract kids due to its extra-large size for nearly the same price. You can see this ad here:

Even some of the commercials in the 80s used bands playing music but these were usually young adults that were playing the music. The instruments were also made to look like the candies in these ads, just like in the 70s versions:

There was also a Nabisco ad that asked how many chews were in a Charleston Chew. This was clearly meant to play off the idea that had already been thought of by the “how many licks to the center of a tootsie roll pop” ads. These were zany ads but stood out to some people since they were so unique: