What’s better than a simple soft drink? What about one that makes you feel cheery? In the South, Cheerwine has been known to do exactly that for a very long time. While it is harder to find this drink than it may have been at some times in the past, it’s still around, and it’s more delightful than ever.

As we approach the holidays especially, you should keep your eye out for the opportunity to get your hands on this delightful soft drink option.

The soft drink known as Cheerwine was first produced in 1917, making it more than 100 years old. It has nothing to do with wine, but instead is a cherry drink that is a soft drink in form. The basic flavor has always been black cherry, although they have created some unique flavors and options through the years as well.

This drink is made by the Carolina Beverage Corporation. It’s a drink from the Southern US, where it really is popular and is the easiest to find. It’s produced in the Southern facility, and they use local distributors and bottlers, which is why it may be harder to find in some areas.

It all started in 1917 when the Maysville Syrup Company declared bankruptcy. Some of the men that had been invested in the company came together to create a new company under a new name, which was the Caroline Syrup Company. This was in North Carolina.

Those men purchase a recipe for cherry-flavored soda from a salesman from St. Louis. That recipe that they purchased was eventually turned into the Cheerwine that people know and love today. All of this happened in 1917, but it wasn’t until 1926 that they trademarked Cheerwine.

While the beverage was created by three gentlemen, it was one in particular that has always consistently run the Cheerwine brand, and it’s continued through his family several generations. That was Lewis Peeler, whose family is still involved. In 1992, it was Peeler’s great grandson that became president and CEO of Caroline Beverage Corporation.

While the black cherry soda is the founding piece of the brand, and still their statement item, they have also produced some things like cream bars, ice cream, and even sherbet over the years. These items are most likely to be found in local supermarkets to North Carolina.

Through the years, they’ve certainly made their way into known spaces. If you go into a specialty soda store, you’re likely to find Cheerwine in glass bottles available to you. This even includes some chains like Cracker Barrel or WinCo that carry a lot of specialty sodas. It is available in other places too.

Cheerwine has always been active in marketing and new ideas. You can see several aspects of that through their history. One prime example is the sponsorship of a NASCAR entry in the 1990s. Morgan Shepherd was sponsored in the Busch Series in that timeframe.

You might remember a Cheerwine cake that was made in 2008. This was from a Salisbury company. They used an old Southern recipe and Cheerwine to create a delightful, moist, and flavorful cake.

The company rebranded around 2009, looking to improve their image and pull in a new generation of consumers by doing so. They used a design that was developed from one of the old Cheerwine logos, creating a bit of a retro style and logo that was attractive and new to the market.

Cheerwine also partnered up with Krispy Kreme in 2010 to create a limited-edition doughnut that had a Cheerwine flavor. This was only sold in a very few locations throughout July of that year. They also brought it back in July of 2011, but to our knowledge those were the only years that the specialty doughnut was available.

While Cheerwine was mostly sold as a 2-liter drink, or in glass individual bottles, there was a time in some select restaurants that it became available as a fountain drink. The first place for this to happen was Old Carolina Barbecue, located in Canton, Ohio. Some other restaurants followed suit, but it remained limited.

As the years progressed, additional products under the Cheerwine name came out as well. This included slushies, floats, cakes, and more. All of these were in partnership with Old Carolina.

And from 2016-2017, Cheerwine partnered with Krispy Kreme in a new way. They created a Krispy Kreme and Cheerwine soda that was available for a couple of years. You might also have heard of the Cheerwine recipe book that came out in 2017.

This drink has long been a statement maker, with a very close following that has sometimes been referred to as a cult. The soft drink has been most popular in Southern and Southeastern states of the US throughout the years, where it remains popular today.

Some slogans they used attest to that, including: “Born in the South, raised in a glass”, “Uniquely Southern”, and “Betcha can’t not smile”.

When Was Cheerwine Invented?

Cheerwine was invented and put into production in 1917, 105 years ago. It was born off the heels of a syrup company that went bankrupt that year. Some of the investors of the bankrupt company wanted to keep their dreams alive so they began a new company.

That company is the Carolina Beverage Company. They created it as their first beverage, in 1917. The beverage has been going strong ever since and has a very close following in the Southern United States, which is where you are most likely to find it if you go looking.

They invented the flavor after purchasing a specific flavor from a St. Louis salesman, and thus Cheerwine was born. It was obviously a winner based on the longevity of the brand.

Cheerwine is owned by the Carolina Beverage Corporation, although it was originally created under the ownership of Caroline Syrup Company. This company is one and the same.

The Carolina Syrup Company was started by three men. Their names were L.D. Peeler, Kurt Weinmann, and Hughston Kirby. To this day, Peeler’s family continues to be an integral part of the management and distribution of the Cheerwine product. They have always been the primary management of the company.

How Did Cheerwine Get its Name?

The naming convention behind how this brand was named isn’t anything fancy. The creators were simply looking for a cheery name and something unique. It’s a soft drink, but it was designed to be smooth, sweet, and more carbonated than most soft drinks.

It’s perfect for celebrations and occasions, which is where both cheer and wine come into play to some degree. It has no wine, and really doesn’t resemble wine either, aside from the burgundy color of the drink. 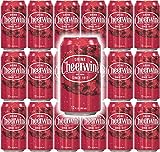 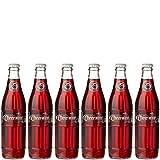 While Cheerwine is a unique flavor on its own, there have been some other creations through the years as well. The most notable is the original flavor, which is Cheerwine. It’s flavored with black cherry and it’s divine.

Here are some of the other creations that have been seen through the years.

Through the years, it is the original Cheerwine that has always been the foundational staple. Of course, the retro version with cane sugar is also a popular choice. And if you like to add a little twist during the holidays, you can still find the Holiday Punch each year only through the holiday season. It’s also only available at very limited retailers.

You should check out the Cheerwine recipe for a delicious punch as well.

If you’re from the South, you likely are quite familiar with Cheerwine, although you may have seen or heard of it in other locations as well. This soft drink is certainly one of a kind in many ways.

Knowing that it’s been around for more than 100 years tells us there must be something special about this classic drink.