This is one of the most well-known candy bars in Canada, and it has been around for almost 100 years. If you have never had this lovely treat, you are missing out! If you love crunchy and peanut buttery candy bars, then the Crispy Crunch Bar is a candy product that you will love.

The Crispy Crunch was created by a humble candy roller working for a candy factory, and his delicious idea has had lasting popularity for generations. Crispy Crunch Bars are currently owned by Cadbury, and the company has not changed the product much since it was first made. This is one of the things that Cadbury is well-known for doing, and caring for classic candy brands that they have purchased is something that makes them one of the best candy companies to get treats from.

The Crispy Crunch was not one of the original candy products that were made by the Nielson Candy Company. This company was founded by William Nielson after he had failed at several other businesses. He had been working on making ice cream at his wife’s mincemeat shop when the transition to candy-making suddenly came to him. Nielson started selling boxed chocolates, which performed fairly well for the combined business.

The Crispy Crunch was the brainchild of Harold Oswain, aged 14, who dreamed up the candy bar while working as a candy roller in William Nielson’s candy room and the Nielson Candy Company. He has always dreamed of designing and selling his own candy bar, and the Crispy Crunch Bar was the first idea that he had about a candy bar that would be really popular.

Harold was promoted from candy roller to candy maker in the 1920s. During this time, a chocolate bar creating contest was going on at Nielson’s Candy Company, and he submitted his idea for what would become the Crispy Crunch Bar. Harold won the contest, receiving a $5.00 prize. The bar that he had dreamt up was log-shaped, but the Neilson company decided that they would make the bar flat, which is the shape that is still used today.

Oswain passed away in the mid-1990s but is still given credit for thinking up the Crispy Crunch Bar. It does not appear that he was paid royalties or given any further monetary recognition for creating the bar other than his $5 winner’s prize.

The Nielson company enjoyed years of success from the Crispy Crunch, and little was done to change the branding or the marketing of the candy bar until the late 1980s. At this time, a new marketing plan was rolled out to get the bar some increased attention. The slogan that was most commonly used was, “The only thing better than your Crispy Crunch is someone else’s”. The campaign was a big success, and the candy bar jumped to #1 in Canada. The company increased the rate at which they were making the candy bar after this by 55%.

When Cadbury bought Crispy Crunch in 1996, the packaging continued to display the Nielson Company logo for a few more years. The product recipe was changed slightly to add more sweetness to the chocolate and to take out some of the salty nature of the crunchy center of the bar. The color of the interior of the bar changed a little as well to keep up with food health standards which have changed quite a bit in the past thirty years.

The candy bar continues to be made with a crispy and flaky interior and a milk-chocolate exterior. Many people say that it reminds them a lot of a Butterfinger, but the flavor is slightly different, and the interior is slightly crunchier. That does not mean that this candy is any less tasty, and for many people who love other peanut butter treats, this is an ideal candy bar choice.

If you want to try the Crispy Crunch Bar and you cannot just travel up to Canada to get one, you will need to place an online order. There are many online sellers who offer this candy treat for sale so that people all over the world can enjoy its crunchy peanut butter goodness. Being able to order a whole box of this candy bar is simple, and you can keep yourself, and your family supplied with Crispy Crunch Bars for days if you want.

Today, the site of the factory where the first Crispy Crunch Bars were made is owned by Mondelez International. The candy bars that are made at this location are mostly all classics that continue to sell really well all around the world in different markets. Having access to the original factory equipment or modified versions thereof makes it easy for Mondelez to make some of the older candy treats that are still in high demand by consumers.

While Crispy Crunch Bars are not made at this location any longer, the tradition of classic candy making continues to be observed by Cadbury when creating batches of this candy bar. When you get a Crispy Crunch Bar, you will be able to enjoy a treat that has been largely unchanged since the early 1900s. There are only a few other classic candies that you can say this about, and that is part of what makes the Crispy Crunch Bar so unique and special.

The Crispy Crunch bar is marketed by Cadbury with a wrapper that is mostly white but which displays images of the candy bar at one end. The candy bar name is emblazoned in large lettering in the center of the wrappers, and the Cadbury logo is placed at the top left corner. The back of the candy bar wrapper is red in most cases, but there are some versions of the wrapper which have a more orange backing behind the logo side of the bar.

This candy bar is flattened in shape, so the wrapper lays flat. It is so colorful that this is a candy bar that you notice immediately when you are shopping through other candy bars. The unique and classic design of the logo is also really special and largely unchanged from the original product livery style.

If you order a box of Crispy Crunch Bars, the box will also be red, and it will show images of the bars on the top and the logo that is on each wrapper on the sides of the box. When buying online in boxes, you will be getting the display box that businesses use to sell the bar on countertops. 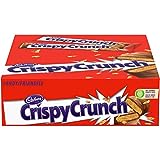 There is only one version of this candy bar, and there are no other spin-off varieties that have ever been made. You will only find one kind of Crispy Crunch Bar when you go shopping to try it.

From the Snackcrate entry for the product:

This is not a vegan candy bar, and there are various other warnings that should be heeded, like nut allergy warnings. While you might want to enjoy this candy bar with food allergies or dietary restrictions, you likely cannot try it out due to the recipe.

Crispy Crunch Bars are only sold in Canada at this time. The brief period that the candy bar was sold in the US was so short that many people missed that it was even for sale. There seem to be no plans to bring the candy bar back to the US, and there also do not seem to be any plans to sell the candy bar in other markets. Many of the other classic candies that were popular at the same time are sold in at least a couple of other markets.

Crispy Crunch is unique in the sense that it is limited to being manufactured in a single place, and it is limited in its distribution. Thankfully for those who want to give it a try but who are not in Canada, you can still order this candy bar online and have it shipped to your location. There are some places where food of this type cannot be shipped, but these days that is a very limited number of places.

Another classic ad for Crispy Crunch:

A Nielson ad for the treat: