If you love chewing gum, there are few products that are more iconic than Doublemint gum. This product is well-known not just for the gum itself but also for the ads that were created to market it. Everyone in the US saw Doublemint ads on many TV networks, and it seemed like there was a Doublemint ad in every magazine that was delivered to your home as well.

Chewing gum has long been popular for more than its ability to freshen your breath, and many people love to chew gum just for the flavor that it offers. This has always been one of the main attractions of the Doublemint product, and Wrigley worked hard to make sure that you remembered that Doublemint gum would offer lasting flavor compared to other gums. If you or your mom didn’t chew this gum on a regular basis while you were growing up, you were probably in the minority.

The name of this product was always intended to communicate that it offered double the flavor. The original advertising that was done during the launch in 1914 stated that there was “double the mint” in this gum product. Gums and sweets were still being used to deliver medications during the early 1900s, and gum was more often associated with breath freshening than anything else. As a result, gums were made to be very strongly flavored as compared with modern gum products.

An interesting fact about Doublemint gum is that it landed on the market at the same time as Adams’ Clove Gum which is one of the strongest-tasting gums that is still sold today. Many people purchase clove gum products just to experience the unusual nature of this older version of modern chewing gums, but the clove flavor is so strong that it is not a widespread success like Doublemint. This might say something about the tolerance for strong minty flavors among most people, or it could have to do with the wildly successful ad campaigns that have been associated with Doublemint from the start.

Doublemint gum has always been extra-minty due to the age which gave it life, and people continue to love the powerful mintiness of this gum product even today. Doublemint is one of the oldest gum products to still have a large market share in the US today, and Wrigley continues to view this as one of its flagship products.

It’s a bit of a chicken or the egg question when you consider if the gum market of today has decided that mint is the right flavor for breath freshening or if Doublemint helped make the consumer market believe this. It is likely that this flavor and the concept of fresh breath have, in part, become associated due to the presence of Doublemint gum.

Early advertising efforts were really creative, and Wrigley even mailed out three sticks of Doublemint gum to everyone whose address they had at the time of the product landing on the market. In 1919, they used this tactic again to send three sticks of gum to everyone in the phonebook. There have been other really creative advertising ploys that the company has used, such as mailing all 22-year-olds in the company address book a few sticks of gum on their birthday. By the early 1900s, Doublemint ads were posted in 62,200 street and subway cars all across America.

Doublemint began to be marketed by identical twins in 1939. In the beginning, the spokes kids were always dressed in matching clothing, and they were not that old. Over time, the twins that were used for the Doublemint ads became older, prettier, and more marketable to a US audience. By 1959, the Doublemint twins were 21-year-old Jayne and Joan Knoerzer. These young women were from Indiana, and they were the faces of the Doublemint brand until Joan became pregnant in 1963.

New Doublemint Twins were hired to take over for the original set of women, and there have been a series of twins over the years who have been the face of the brand. June and Patricia Mackrell were the twins who took over in the 1970s, and then various other sets of twins who often went on to have TV careers were used to indicate that Doublemint was twice as minty as other gums.

Among the Doublemint twins who went on to enjoy success in TV or sports were Tia and Tamera Mowry, Cynthia and Brittany Daniel, Figure skaters Pamela and Jeremy Green, and Boris Sagal’s daughters. Some of the female twins were even asked to pose for Playboy over the years, which tells you just how pervasive the Doublemint ads really were.

The twins with the longest tenure in the role were Linda and Lisa Yokubinas, and kids of the 80s and 90s will usually think of them when they think of the Doublemint twins ads. The ads were so successful that there was a fair amount of money spent over the years on the Yokubinas ad campaigns.

They shot ads in Hawaii, the Canadian Rockies, and other locations that would not normally be required to create gum ads. Some of the most picturesque and impressive ads that have ever been made for a gum product resulted from this ad campaign.

This product is one of the many older products still sold today that is made with a “trade secret” recipe. This used to be more common in the days before full disclosure of the ingredients in foods was required by law. Wrigley has stated that they have made some changes to the natural sweeteners in the gum in 2003, which means that it now includes some artificial sweeteners.

This is the only change to the product recipe that the company will own up to since its creation, so it is hard to know what is different about the gum product that you can enjoy today and the original product that was made in the early 1900s.

While the “Double your pleasure, double your fun” tagline has fallen out of favor over the years, Doublemint gum is still sometimes advertised by twins or actors that are made to appear as twins. Word-of-mouth and staying power have made this gum a big hit even in today’s market, and ad efforts are not as essential to the product’s success as they once were. Like many bubble gums and candy products that have been around for so long, Doublemint gum has reached a level of success that does not necessitate ad pressure to back it.

From the CVS entry Doublemint Gum :

These were usually the double packs of gum that were more common in the 80s and 90s than they are today. The simplicity of the design has long been one of the identifiable factors that is connected with the product, and most people can tell you exactly what this gum product looks like without even having to think about it.

Between the simple and effective packaging style of this product and the really clever ads with twins, Doublemint has carved out a recognizable place for itself in the gum market. There are few gum products these days that are marketed in such a simple and basic way, which has made it easy for Doublemint to continue to stand out from the crowd. 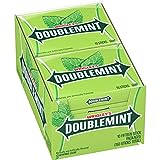 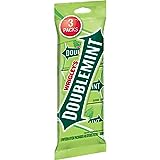 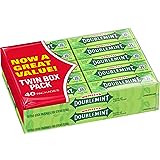 You can also buy Doublemint Gum at Old Time Candy by clicking the image below.

As the twins ads became increasingly popular, some of the ads would feature various sets of twins instead of just one set. Sometimes there would be a set of male and female twins who “accidentally” met up while chewing the gum. The 80s and 90s were a time when ads started to be more focused on beautiful people selling products that were shown to be connected with a swanky, upscale lifestyle.

Doublemint gum cashed in on this vibe a little as well, using sets and scenery that clearly indicated that cool, wealthy, connected people were chewing their gum products. You can see the shift from just twins advertising the product in a clever way to a lifestyle that is being associated with the events of the ads starting in the 80s.

The Yokubinas twins ads were almost always associated with this sense of “living right” because of chewing Doublemint gum, and they were always displayed as young, attractive, seemingly single women who were having the time of their life as they chewed their gum.