If you love onion rings, then you probably really like Funyuns. This treat is not only meant to taste a lot like an onion ring; they are also shaped like them. This product has been around since the 60s, and it continues to be really popular today despite its unusual shape and flavor. Funyuns are sold in the chip aisle at stores, despite the fact that they are not at all like chips unless you consider their crunchy texture a link between the two kinds of snacks.

There are various products that are similar to Funyuns that are sold around the world, and you might have experienced these other snacks if you have never tried Funyuns. Apparently, the popularity of this onion ring-style treat is fairly universal!

Funyuns have been sold in the US since 1969. George Wade Bigner, who worked for Frito-Lay in the 60s, invented the snack. Funyuns are made of cornmeal that is shaped into rings through an extrusion process. This leads to a product that has a fried food-type texture, and it also makes it possible for Funyuns to have an onion ring shape. Extruded snacks were becoming more common during the 60s, and Funyuns were not the first of this kind of treat to grace the shelves of the snack aisle. While there are few products that are made this way today, Funyuns are still one of the most popular snacks around.

The flavoring for this snack is added with an onion powder, and salt powder that is added after the extrusion and formation process is completed. This is a very simple snack as compared to other treats on the market today, but it does not offer any less enjoyable of a flavor for all that. The crunchy nature of these snacks, along with their lovely onion taste, is just as enjoyable today as it was in the 60s. If you are not a fan of onion-flavored snacks, this will still not be your favorite, but if you like unique treats, there are few snacks on the market that are as unique as Funyuns.

PepsiCo owns Frito-Lay, and there have been various other products that have been licensed for sale around the world by PepsiCo that are essentially Funyuns with other names. In Brazil, for example, Funyuns are sold under the name “Cebolitos”. Nongshim Corporation in Korea also makes a similar product that is not linked with PepsiCo’s Funyun product, that is called Yangpa Ring. Some markets also sell unique flavors of Funyuns as well, such as the Shrimp variety that is offered in Japan during the spring.

The name of this funny little snack was actually coined by Jim Albright. The original product name was supposed to be OnYums, but this name was already a registered trademark that was held by Rudolph Foods for another product. Albright came up with the silly Funyun name, and everyone agreed that this was a better name for the product anyway.

Jim Albright, much like inventor George Wade Bigner, seems not to have been given any actual monetary reward for naming the treat or imagining it in its current incarnation. The stories of various well-known snacks are populated with instances like this where the inventor or someone who was critical in the process of naming the item are never given anything but a nod for their efforts.

The first advertising for Funyuns was accompanied by a song sung by Susan Christie called, “I love Onions”. It was clear that the treat was always supposed to mimic onion rings, and the original advertising leaned into the onion ring nature of this snack. Today, ads for the brand are much less interested in connecting the snack to onion rings, and this might be due to the waning popularity of onion rings as a fair food or a stadium snack.

The 60s were an interesting time for snack food items, and space-age foods were all the rage. There were many oddball products that were a big success, many of them being advertised as fit to take to the moon.

Funyuns were never marketed in connection with the space race, but they were very in keeping with the strange snack trend that drove the snack market during this period. During the 60s, you could easily get a freeze-dried ice cream sandwich and a bag of Funyuns after school and head home to watch cartoons and marvel at the world you were living in.

Many people actually use Funyuns as the crunchy topping in their green bean casserole, and there are various Turkey recipes that include Funyuns as a breading ingredient. So maybe our obsession with strange foods and strange ways of using them has not changed all that much since the 60s.

In fact, it might be the various strange uses of Funyuns that have led to the way that they are currently marketed. Instead of generating the usual kinds of ad content, Funyuns have mostly been advertised in recent years through the Funyuns Instagram that FritoLay established and through the borrowing of silly and zany content that creators on various social media platforms have made.

FritoLay seems to have leaned into all that is strange and zany about this snack product, and they might have been wise to allow influencers and people making taste-testing videos to do most of the talking for the FunYuns product.

There does not seem to have been a big marketing push for Funyuns after it was first launched, and it is likely that word of mouth has served this snack just as well over the years as any ad campaign. After all, all you need to do is lay eyes on the Funyun’s snack bag, and you will probably want to pick them up and give them a try. There are few products on the market in the snacking space that are so delightfully eccentric and unique as Funyuns. 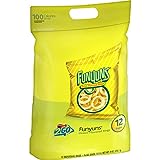 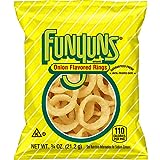 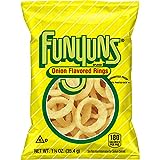 There have been a few different flavors of Funyuns made over the years, many of which can no longer be enjoyed alongside the original oniony treat.

Some of the retired flavors were so popular that people have petitioned to have them brought back. No word from Frito-Lay about this happening, but they have been known to revisit old and discontinued flavors for other products on a seasonal basis from time to time. There are shrimp-flavored Funyuns that are sold in Japan in the spring as well.

Flamin’ Cheetos are the closest things to the Flamin’ Hot Funyun variety, but you will see some key differences in texture and flavor between the two products if you try them side by side. Thankfully for those who love spicy snacks, You can get either of these treats at the store today, and there has been no indication that Funyuns will stop making Flamin’ Hot Funyuns anytime soon.

Some people say that the lack of oil in the Flamin’ Hot Funyuns makes them a bit dry and that the onion flavor can overwhelm the spice as well. For that reason, many people prefer Flamin’ Hot Cheetos, but you might not be in this group of people.

From the HEB listing for this product:

These products have milk and soy ingredients in them as well. This is not a dietary-restriction-free food option for snacking. This product is not made with gluten, but it is not certified to be gluten-free.

Funyuns no longer seems to be advertised in more traditional ways such as print ads or even TV ads, but the company has created  Funyuns Instagram that they add content from time to time, and there are many silly spoofed ads for the products that turn up on TikTok on a regular basis as well.

The brand is so blatantly silly that FritoLay seems to have leaned into the oddball nature of this treat more and more over time. This has led to some really funny ads that the company may or may not have had a hand in as well as lots of content being created by people taste-testing and reviewing this strange little snack.

Searching for Funyuns ads will always turn up all kinds of mixed content, and the journey to learn more about what people think about Funyuns can be just as fun as actually learning about the snack from FritoLay themselves.

What are Funyuns made of?

Funyuns consist primarily of cornmeal, ring-shaped using an extrusion process, representing the shape and texture of fried onion rings. A salt and onion mix gives them their flavor.

Funyuns are a product of PepsiCo’s Frito-Lay company.

Funyuns is the brand name of an onion-flavored corn snack introduced in the United States in 1969, and invented by Frito-Lay employee George Wade Bigner.