Mmmm… the sweet taste of honey, paired with a crunchy corn cereal, and topped with a bit of milk. Doesn’t that just sound delicious? Of course, you could also just skip the milk, and eat it dry, and it’s still pretty delicious that way too.

If this sounds yummy to you, check out Honeycomb cereal. It’s packed with crunchy flavor, and it’s oh so sweet. It’s a crunchy good time to enjoy. You may have your own memories of this cereal, but we hope you will take a look and learn more below!

You likely are familiar with the Post brand, and maybe even with delicious Honeycomb cereal already too. Honeycomb was a cereal that was made originally in 1965, that’s more than 57 years ago. The cereal is a small corn cereal that is designed to look like a piece of honeycomb. It’s coated and flavored with honey, but it’s a very light honey flavor so it isn’t overwhelming to people.

Through the years, they have adjusted the formula a couple of times looking for ways to make the cereal healthier without taking away from the sweet honey flavors that people love. They’ve had to tweak it some, but what they have no seems to be working pretty well on both sides of taste and nutritional value.

This cereal has even had a couple of different flavors through the years, which we will talk about more later. You will find that even with the healthy improvements, there are still some ingredients not everything is a fan of. However, the cereal also has iron, Vitamin Bs, Folic Acid, and Zinc too.

If you remember some of the older commercials on TV, you probably remember the bee, or maybe even Honeycomb kid too. They’ve had a lot of great marketing advantages through the years, and many of them stand out to people still.

Throughout the 1970s and 1980s, you can reminisce on the Honeycomb Hideout, where eating the honeycomb cereal made an otherwise unfriendly person far more enjoyable to be around. This commercial also had a jingle about the cereal being big and also having a big taste too. The cereal even had a hideout club children could participate in. If you are a fan of the show Futurama, check out the episode “The Sting” to see more about the jingle!

Then, there was the Honeycomb Kid. He loved Honeycombs so much and went in search of the secret behind this great-tasting cereal. They had a series of commercials where he was looking for three key components about the cereal, and could never figure out the third part. He knew the cereal was delicious thanks to the crunch and the shape, but what else? Spoiler alert, the third component was the taste of the cereal.

There were some other spins on the Honeycomb Kid or Honeycomb kids even as well through the years. Then, they moved to a new mascot of sorts in the mid-1990s. This was Crazy Craving. Crazy Craving was a wild creature with crazy hair that absolutely loved and even craved Honeycombs. You might remember the catchphrase “we want honeycomb” from anyone who went crazy craving the cereal.

And finally, Honeycomb also had Bee Boy, whose name was Bernard. Bee Boy was a young boy who had been raised by bees. He was a bit wild having been raised by bees, but when he is socialized, he absolutely loves Honeycomb cereal. There were several different versions of advertising with this mascot as well.

In the 1970s and 1980s, cereal boxes often had prizes in them. Honeycomb cereal took part in this adventure too, rolling out some special edition model cars. They had four different models with six different colors, and for a time, every box had a 1969 Mercury in it. Imagine how much Honeycomb kids (and adults) were going through trying to find one of every available option.

They didn’t stop there though, they used other cars throughout the 70s and 80s. They also had a very popular mini license plate with different states on them. These license plates, however, could also be ordered by mail for a cost. The cars were only available in cereal boxes.

When Was Honeycomb Cereal Invented?

Honeycomb cereal was first made in 1965. While the cereal itself has been changed some through the years, it’s been going strong for 57 years and counting. It’s always remained popular, even despite some of the changes.

We don’t find a lot of special backstories about how or why the cereal was invented. We assume it was inspired by honey flavor. Post has always been in the business of creating cereals. It’s just simply what they do.

Honeycomb Cereal is owned and produced by Post. The company is quite large and there are several breakouts of it in actuality. For example, the official owner is just Post holdings, but the producer is Post Consumer Brands. And Post as a whole falls under the Kraft Foods umbrella for ownership.

That’s quite the line of ownership when you think about it. There are a lot of details there to unravel. But, to make a long story short, Post is the owner and this is the branding that you will see on cereal boxes as well.

How Did Honeycomb Cereal Get its Name?

The naming of Honeycomb cereal is pretty self-explanatory. After all, you have a corn cereal with honey flavors and it’s shaped to look like a honeycomb. In this particular category, the name simply fits the style, flavors, and design of the cereal, right? 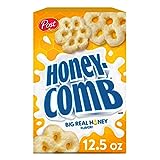 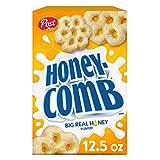 Honeycomb cereal is really known for its original flavor. That’s the simple honey flavor of a corn cereal. No other flavors added to the mix here. It’s simple and yet sweet and tasty at the same time. Now, they also have Honeycomb Big Bites that are extra-large honeycomb bites.

The cereal is great in milk and eaten as cereal. It’s also pretty great by itself as a simple crunchy snack too.

There have been some other flavors over the years. These flavors typically come and go, or are sometimes just seasonal. While you can’t always find different flavors, you can always find Honeycomb in most grocery stores.

These are the other flavors.

You can also use Honeycombs to make a variety of fun snacks as well. Post has several really great recipes for using Honeycomb cereal for fun treats. This includes party mixes, cereal squares, munchy treats, and more. It’s all about what you like. You can always find fun and interesting things to do with your Honeycomb Cereal.

Honeycomb cereal is a great breakfast food that has now been around for more than 57 years. It’s tasty and sweet, and easy to use for a delicious treat too. It’s easy to find online, or in most grocery stores. The flavors are not always available, and sometimes come and go seasonally. However, your original honey flavor will always be the classic, anyway.

How will you enjoy your Honeycomb cereal? Pour yourself a big bowl, make some delicious treats, or just eat it dry right out of the bag. It’s totally up to you!