All too often, we get wrapped up in just trying candy or snacks that are local to us. But sometimes it can be a lot of fun to get familiar with other cultural candy creations. You just never know what treasures you might find.

We’re open to any candy that is a delight to try, and one of those is Konpeito. This Japanese candy is much like rock candy in comparison, but also very unique. Keep reading to learn more about this tasty treat.

Konpeito is a Japanese sugar candy. It’s these small little pieces of candy that are made mostly of hardened sugar, but also sometimes have flavor added. For those of us familiar with rock candy, these candies are very similar to that concept. That being said, they are still unique, and really a lot of fun.

These little sugar candies are in tiny sphere pieces, and the spheres have bumps that stick out in different directions. They almost look like little crystals, or something along those lines. The cool thing is they also come in different colors, as well as flavors.

Tracing back to the roots of this sugar candy, Japanese culture started the concept sometime in the 1500s. To the best of our knowledge, they worked together with Portuguese traders to create the idea of the candy. The traders had sugar, and the Japanese had innovative ideas. Before that time, the Japanese had not had sugar to work with.

At the time, Konpeito was extremely expensive, since sugar was a new concept. It was unique, but since it was new and required an expensive ingredient (sugar) to make, it simply wasn’t affordable. Only the rich really got to enjoy it.

Stories talk about a Portuguese missionary bribing a leader in Japan to allow Christian missionary work in the country. That is what initially attracted the Japanese to the candy, and then it continued to transpire from there.

Of course, a lot has changed since the 16th century. Sugar is no longer rare or expensive. The Japanese perfected their recipes, and learned that you could add flavors and color to make the candy fun. Now, this candy would fall under the category of a “penny snack” in Japan. It’s quick and easy to make, and you can even some recipes out there to make your own.

That being said, making confectioneries isn’t always as easy as it sounds either. Getting the timing and temperatures just right can be a challenge. Good thing you can just buy some of this candy for about the same price as if you just bought the ingredients anyway.

You can see the value of Konpeito to the Japanese culture throughout history. There are several instances where it stands out. From anime to video games, and even in sweet boxes that are commonly used as special treats or gifts.

It didn’t take long for Konpeito to become a cultural symbol in Japan, and it’s always remained a popular sweet ever since.

As far as production, the processes have evolved over time. However, the concept remains the same. They ladle sugar syrup into a tup and continue rotating over and over. Originally, this sometimes took over a week to complete, as the sugar hardened and new layers were added. The end result was these tiny little sugar balls, with some bulging spots.

While many artisans from Japan continue to use this process, there are also more time-friendly approaches now as well. In the middle of the sugar syrup was always a poppy seed base. Not all producers use a poppy seed now.

Cultural Recognition and Uses of Konpeito

This candy is famous in many different ways. It’s not just the flavor, but also the fun shapes that it comes in. It’s a tasty sweet treat, and common to have around. It’s also been common in many different productions throughout the years.

The video game Super Mario Galaxy has star bits in the game. Those star bits are actually meant to be symbolic of Konpeito. They look almost exactly like them, and while you might not be able to taste them, you still get the idea.

Another popular video game that stars this candy is The Legend of Zelda. Zelda has star fragments and gratitude crystals. Both of these are designed right after the infamous Konpeito, and meant to be a rendition of the candy, or perhaps a tribute to the candy?

Then, there are more recently created games that also star the candy. You might have seen it displayed in the Pokémon series, which is a Japanese series. In Pokémon, the candy is depicted in a couple of different areas. This includes Minor, Max Revives, and Cosmog’s Stars.

In the game Cookie Run: Kingdom, there are EXP star jellies that are based on Konpeito. Then, in the most recent game, Animal Crossing, the star fragments are also inspired by this candy. Each of these places shows a clear inspiration to Konpeito.

Finally, in pop culture, this candy was depicted in a children’s anime series, which was called Hamtaro. Here, the translations referred to them as diamonds of sugar, which is an exact description of what they are, in our opinion.

When Was Konpeito Invented?

We can’t really determine exactly when this candy was first invented. We know that the creation that the Japanese make was inspired from a Portuguese candy of some sort that was a similar concept. That candy was presented as a bribe, and they fell in love.

The name Konpeito was actually derived from the Portuguese translation for sugar candy, so it’s a fitting name and story behind the name that we know of the candy. The Japanese started creating this as an artisan candy for the rich sometime in the 1500s, and it’s been a popular candy ever since.

Over the years, it became more affordable, and now it’s a cheap and highly sought after candy throughout the entire country, and even well outside of the country too.

You might compare it to the similar rock candy, but it is actually an art to make, and it was inspired differently from the beginning. 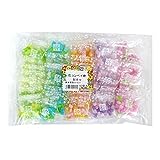 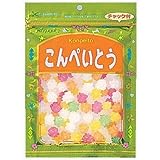 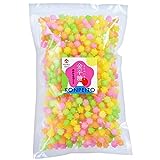 One of the magical things about Konpeito is that it can be made in any flavor that people want really. The most common choices are fruity flavors, as well as mint or anise flavors. That being said, it’s not unusual to hear of things like cinnamon, ginger, and other popular flavor choices from Japan.

When it’s made, flavor can be added to the concoction. This flavor will be light, and the candy is otherwise almost flavorless, with just the sweetness of the sugar it was made with.

The candy can also be made in several different colors, which is often affected by the flavor added.

Where so many candies are dedicated to a factory or a specific company, that is not the case with Konpeito. Instead, it’s just a cultural artisan candy with a vast history. There’s no branding, although several different brands do create the candy.

Instead, you get a unique candy that is the same, it’s just made by many different artisans that understand the detailed process of creating such a delight. It’s fun, sweet, and totally tasty.