Soda is one of the most classic of sugary sweets, and diet colas and other diet sodas have been a big part of people’s lives since they came on the scene to replace full sugar sodas. If you have always loved soda, you probably enjoyed Diet Rite many times during the 90s and maybe even before.

Diet sodas have gotten a bad reputation lately for being full of chemicals that people should not put into their bodies, but many people still enjoy these sodas on a daily basis. The history of this soda is interesting and well worth learning about.

Diet rite was originally actually made to be a diet product. This was not intended to be an enjoyable soda for everyone to drink when it was first made. The entire original platform of the product was to help people to lose weight. This product was first marketed as a health food product, and this was the main promotional plan for the soda until 1962.

This soda was first made by The Royal Crown Company, and it was actually the first diet soda that was made within the soda industry. This was a product that was intended for diabetics as well or for those who could not consume sugars in general. The soda was actually very successful despite the limited audience that it was actually intended for after testing began in 1958.

By the mid-60s, this was the 4th best-selling soda in the country. Competitors realized they had been missing out, and all kinds of imitators cropped up on the market. By the end of the 60s, there were about two dozen different diet sodas on the market.

Among these products were long-term competitors like Tab soda and Diet Pepsi. Diet Rite was still really unique even among this group of long-term products that are still familiar today. It was the only option that was offered with no calories, no sodium, and no caffeine. Royal Crown was considered to be one of the most revolutionary brands in this space during this period.

Part of the reason that the RC brand was so successful during these early years was that they were the first company to sell their product in aluminum cans. This made soda portable and also allowed people to enjoy soda away from the soda shop. However, the tides started to turn once the soda can and the diet soda trend caught on everywhere.

RC Colas of all kinds have long been associated with a one-off, bargain brand label. This is not actually the case, as this brand made the original sodas that people were excited to try and enjoy. What likely has changed over time is that other soda companies have invested more in marketing, colorful cans and cartons, and increasingly sweet flavors.

RC continued to make the same classic items, like Diet Rite, in much the same way, even as the rest of the industry changed its products to meet the demands of a changing market. Some of the other trouble for Diet Rite was that the original ingredient that made the soda sweet was cyclamate. This was an ingredient that was 30 times as sweet as sugar.

Cyclamate became linked with possible risks for cancer in the mid-60s’. Tab soda, Pepsi’s Patio Cola, and other brands that have long been off the market like LoLo, Coolo-Coolo, and Bubble-Up were also made with cyclamate.

Even Fresca was originally made with this sweetener. Despite the fact that the sweetener could not be reliably linked with cancer or other health hazards, it became increasingly clear that soda companies needed to move on to a new recipe.

When Diet Rite could no longer be made with its original recipe, sales plummeted. RC no longer had a special foothold in the diet soda category, and it did not make other products that could compete with giants like Coca-Cola. By the time the company released Diet Rite again, made this time with saccharine, the damage had been done.

Diet drinks were not as popular as they had once been, and Royal Crown was in a tailspin. Even when the studies that had originally shown cyclamate to be hazardous were outed as being poorly conducted and not indicative of real risks to anyone’s health, it was too late for Royal Crown to fully gain back its former market position.

This downturn related to these false test results is likely the reason that RC sodas and products like Diet Rite have lingered in the shadows of other products for the past ten to twenty years. The one upside from this harsh lesson was that the company began to diversify. They released a few other products and branched out into juice-based products as well.

In 2000, Diet Rite was reformulated once more. This time the aspartame that had been added to the soda was replaced with sucralose, which has been revealed to be a healthier choice for consumers. Diet Rite was one of the sodas that were the first in the United Stated to use neither aspartame nor saccharin as a sweetener. The company added a cherry cola flavor to their lineup in 2005 that has been a bigger success than some of their other recent products.

As of the time of writing this, the product has been sold to Keurig Dr. Pepper and is managed by this company. The products continue to be the most successful in the Southern states of the US and also in Chicago. Small towns are more likely to sell large quantities of this product than big cities, and the northwest seems to barely know that it exists.

Considering that the soda industry is in a bit of a slow decline due to increasing consciousness about healthy eating and the risks of sugary drinks, Diet Rite’s inability to rise to the forefront of the drink market again does not seem so critical. There are many brands that are likely going to have to look long and hard at their future plans, and it is likely that some of the various smaller brands of soda on the market today will eventually stop being sold.

While diet sodas are not more or less popular than they were twenty years ago, the rise of safer sweeteners that are not connected with troubling studies about health risks has made them more successful than they have been in a long time.

Diet Rite might actually prove to be one of the few soda products that came out of this slump in soda sales alive. The fact that this little company seems able to make it through the worst ups and downs makes it more likely that it will be able to take on the changing nature of the soda market and win. 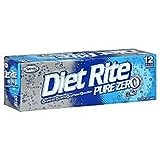 From the Albertson’s entry for purchase online:

This company has had so many different versions of its cans and livery that it can be hard to cover all of them in a few sentences. Most people think of the cans that were popular in the 80s and 90s, which used block lettering on a white background to state the name of the product and the flavor. The tops of the cans bore bands of orange or red, and there was a little more information about flavoring and product features in this area.

For many years now, the cans have been very basic, still white or silver behind the logo and mostly decorated with a large blob of color under the writing on the front of the can. They are also seemingly splashed with liquid, and there are water droplets depicted all over the can surrounding the logo. The bare-bones and basic nature of the current cans is in keeping with the way the product has always been marketed and feels on-brand if a little dull.

The original Diet Rite ads featured the Paris sisters singing the jingle. This was reserved for the early years of the product’s existence, but it is a memorable part of the history of the advertising for this product.

There have been many other big names that have been brought on to advertise this product, like Tony Danza, and the company did find some really good spots for its products to be advertised during daytime and evening television programming. This helped the products to make the jump from the days of big sales to the period that was a bit of a struggle while the recipe was being changed around. Despite the fact that this product tends to be relegated to the “bargain” shelves in the grocery store, there has been a  lot of good money spent on this product’s ads over the years.