You might recognize SoBe as a drink that was incredibly popular in the 90s and early 2000s. It still is very much available on the market and there’s a lot to know about this company.

The drinks were recognizable for their bright colors as well as the fun lizard that was on every single glass bottle. Keep reading to learn more about SoBe drinks.

SoBe drinks have a unique variety of flavors. Some of the flavors are juice, others are tea, and even more represent a flavored water variety. They used to always use glass bottles for their drinks but they changed this habit in 2010 and now use plastic bottles across the board.

These drinks came out in 1996. Originally, they were called the South Beach Beverage Company. This name stuck until about 2001. The beverage company still remains, in a sense, but the drinks are called SoBe, which is short for South Beach.

The very first drink that SoBe created was a tea variety. It was called Black Tea 3G. This tea was incredibly popular and still remains popular today. The South Beach Beverage Company was sold to PepsiCo as of 2000. The name and branding have not changed in that time.

The original founders of this beverage company were Kevin McGovern, John Bello, and Tom Schwalm. These gentlemen came together in 1995 to create what would be a successful business going forward.

Through the years, they have discontinued a few products but they also continue to have some incredibly successful products too. You may not see as much SoBe as you did at one time, but they are still out there and still popular.

They even tried their own carbonated soda-style drink at one time but this particular option simply didn’t go over well and therefore didn’t last all that long on the market. SoBe is known for adding things like ginseng and ginger to their drinks, which do have some health benefits.

One of the areas that SoBe has already stuck out in is marketing. They have had numerous marketing campaigns through the years that have always been successful. Their bottle labels have always had their digital lizard emblem and this has been one of the lasting marks of the company.

For the first several years of operations, they produced their drinks in glass bottles but they have since changed to plastic bottles as a more eco-friendly and price-friendly approach.

Here are some of the marketing approaches they have used and been quite successful with through the years. SoBe has always have a digital newsletter available to their fans. It’s a monthly offering known as “Lizard Tales” and it has promotions, updates, and more in it.

One particular launch of a SoBe drink was known as Adrenaline Rush. This was a sprots drink meant to energize a person when they were deep in action. They had some fun advertising based around action sports at the time. However, they have since discontinued this product.

Much like other drink companies, they have run operations would you could find codes for prizes by looking under the cap. This has always been common with Coca-Cola and Pepsi drinks so it makes sense to see it with SoBe at one time. Their promotion was known as Heads or Tails.

SoBe Lifewater is perhaps one of their more popular drinks on the market now because it is a flavored water with several advantages to it. They even ran ads for the Superbowl in some years for this particular drink but it has been some time since they advertised to that degree.

Some of their partnerships include things like sponsoring the Chicago Rush cheerleaders, partnering with Mike Tyson’s Main Event campaign, and partnering with AOL Fan House for a bracket challenge.

There have been some times of celebrities being the “face of SoBe” as well, such as Ellie Goulding who was the UK’s face of SoBe in 2011.

The infamous skin suits from SoBe have designated models or celebrities to wear the suits from time to time as well.

And yet everything remains reminiscent of the SoBe name, representing South Beach, and the lizard as well. The latest tagline that perfectly describes the brand and what they use to create their drinks is “Ride the Wild!”.

When Was SoBe Invented?

SoBe was first invented in 1995 when 3 men came together to compile a unique creation. This drink was like no others that have been so successful before, using ingredients like ginseng, ginger, and guarana to really make a flavor impact. The drinks also use a variety of herbs and sometimes have been known to have a pepper flavor to them.

The drinks are very unique and no other company has really come close to actually giving them real competition. This is why they remain prominent today. The drinks are enjoyed by many and can’t be replaced by any out there.

While they have undergone some changes through the years, they continue to represent the original presentation of the brand and the flavors.

SoBe drinks are now owned completely by PepsiCo. When they first were created, three men came together and co-founded a business calls the South Beach Beverage Company.

The creation of the company began in 1995. It was in 1996 that they first started producing SoBe drinks and the brand has continued to remain steady since that time. SoBe has now been in business close to 30 years.

The South Beach Beverage Company did sell to PepsiCo in 2000, where it was remained ever since.

How Did SoBe Get its Name?

If you are familiar at all with the history of this company being based in South Beach, the naming convention makes sense. SoBe is short for South Beach, based on the primary area it originated from. It was also sold under the South Beach Beverage Company originally so these things all tie together in the name. 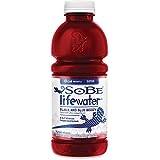 Over the years, there have been a lot of great drinks that have come and gone from the brand. They currently have a steady option of 7 standing drink choices. These include their most popular and bold flavors that have lasted through the years.

Here are those flavors.

On their website, you will also find some awesome recipes that give you some fun drink mixing options you can try and create your own mixes with. These can be alcoholic mixed drinks or simply some flavor mixed drinks using various fruits and juices.

At least 25 different flavors and varieties have come to market and been discontinued through the years, including Mr. Green, which was the carbonated soda-like drink that didn’t last long.

SoBe drinks have had a successful stint on the market for the 25+ years they have been around. These drinks are all about the bold and outstanding flavors that are different than your traditional drink choices.

What happened to Sobe Drinks?

SoBe drinks are still listed on the Pepsi website as an active company, although the Pure Rush energy drink is no longer available, some flavors such as SoBe Elixirs, Teas and Waters and still available.