This delightfully sour candy is a favorite with people who love these kinds of candies. Sour candies are often hard to eat because they are messy, but the shape and design of these little candy straws make them really easy to eat and enjoy in any situation. If you love sour candy, these little snacks are probably at the top of your list of favorite snacks.

Sour punch straws haven’t been around as long as some other candies since sour candies have not been popular for as many years as chocolate-based treats. Chocolate snacks have a much longer history than sour treats, but you will find that sour punch straws are among some of the earliest entrants to the sour candy space. There are many reasons to love these little sour candies and if you have not tried them before, you need to make sure that you put them on the list of candies that you are planning to give a try.

This candy entered the market in the 1990s. It was created by the American Licorice Company and the shape of these delightful candies matches the shape of some of the other products that the company has made for years. The company also makes Red Vines, which are the flagship of the company. The American Licorice Company has been around since 1914 and their sour straws were a well-crafted addition to their offerings that have been successful for many generations.

This candy was quickly offered in many different formats like straws, bites, bits, ropes, and twists. The company is clear about the fact that these candies are not made with lactose, which makes them one of the only candies on the market that are suitable for those who are lactose-intolerant or vegan. This is not a common offering from most candy companies and this is a beneficial addition to the lineup at American Licorice Company.

The original sour punch recipe was originally created by Noah Nawaz. Sour Punch Straws were one of the first of these kinds of candies to enter the market in the 90s and their uniquely sweet and sour and sugary texture was instantly popular. The candies were sold in basic flavors that are still available today. Even the packs of sour bites and bits are sold in these flavors.

Sour Punch Straws are sold in the same flavors that have been made since the beginning. There have been discontinued flavors as well.

The discontinued flavors were introduced and then pulled. They were later reintroduced in the “Rainbow Straws” pack. These flavors were lemon and grape.

The company has released some limited-edition offerings like “Santa Straws” as well. This was mostly a packaging and ad campaign effort. The candies were the same within the Santa Straws packaging.

The flavors of the Sour Punch Twists products are as follows:

There are some variety bags that include other combinations of flavor options. You can get most of the offerings of these candies from Amazon and they are also sold online from other major companies. Many movie theaters also offer these products and you can get them in many gas stations as well.

The grape flavor has been requested so much since the flavor was discontinued that the American Licorice Company stated that they were going to bring them back. You could buy them on Amazon for a limited time after this announcement. The wrappers look just like the other candy packaging but with grapes and a purple backdrop.

Some people skeptically state that this flavor reminds them of children’s cough syrup and it appears that the limited run of this candy was a short-lived effort in 2019. There has not been a statement about whether or not the flavor will make an appearance in the future for any reason or within any of the variety packs or versions of the candy.

With the rise in recycling consciousness and wildlife awareness, the American Licorice Company created a version of their products that are made to be used as straws. These flavored candy straws were intended to be used with any kind of drink and they were made with the same formulation as the other Sour Punch Straws products that are already on the market.

These products have been discontinued, but this was a clever promotional idea that certainly got some attention while they were on the market. Kids love fun foods like this that can be used for functional processes, even if they inevitably were damaged by contact with liquids and did not serve the function of straws for very long.

One of the problems with these products was that they would melt into your drink, so there were certain products that did not get along with exposure to a sour drinking straw that had melted into them. These straws were best suited to enjoy sodas and other sugary products by themselves.

How Many Calories Are in Sour Punch Straws?

Sour Punch Straws Twists packs contain 150 calories. There are 210 calories in a pack of regular straws. There are 26g total sugars in each package of these products and they impart 18% of the total carbohydrates that you need in a day.

Red Vines have 16g of sugar in a serving by comparison. They are not coated with the added sugars that the sour straws are coated in for the sour flavoring. If you are trying to figure out how this compares to chocolate candies, a Snickers bar has 20g of sugar.

These are simple candies. The ingredients as listed on the Amazon entry for Blue Raspberry straws.

This is the same general ingredient list as most of the flavors.

These candies have always been sold with colorful packaging that includes the colors of the flavors within. The packaging shows little round cartoon faces that seem to be puckering their lips and the simple logo design includes small yellow lightning bolts that indicate the sour surprise of the sugar coating of the candies.

You can get these candies in boxes and the bits and bites come in bags that have the same branding. Since the candy is so new overall, it has not experienced as many changes to its packaging or advertising and branding as other candies. Many sour candies are sold with colorful wrappers like this, but sour punch straws have always had very recognizable packaging.

Sour Punch Straws get their sour taste from the sugar that is on each candy. The interior candy is soft and sweet and offers a surprising contrast to the sourness of the first bite. You can recognize each unique flavor within the variety packs and you will find that the unique flavors are much better than some of the other sour candies out there.

Sour Punch Straws are also linked with a very nice texture and many people prefer the texture of these straws to other candies that are in the same category. While not the same texture as red vines or other licorice products, this candy offers a really nice eating experience that you cannot get from other candies. 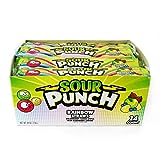 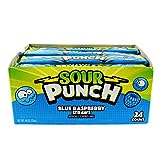 Here are the ingredients of Sour Punch Straws.

In 2018, Sour Punch Straws were the center of a marketing campaign related to National Sour Candy Day in Chicago. The slogan for the campaign was, “Embrace Your Punch”. There was a large exhibit that was put on display for the event and the display was connected with the Hangout Music Festival in Alabama as well as The Taste of Charlotte and the Alpharetta Arts Festival.

The festival features some of the discontinued flavors and the profits that were generated during the event were given to various causes. Kristi Shafer, who was the Vice President of Marketing at the time of the campaign stated, “We all have a responsibility to make this world a better place”.

This kind of clever marketing event was an excellent way to get the Sour Punch Straws product before new consumers while also giving good press to the company. The company has always stated that their intention for all of their efforts is to, “deliver smiles” and they focus on many advertising offerings that are connected with fun and enthusiasm.

TV commercials have featured the cartoon faces that are on the packaging bouncing across the screen and slogans such as, “everybody punches back sour punch candies” and “punch up any situation”. Some of the early campaigns put people in boring situations that they made exciting by adding some sour punch products to the mix.

An ad for “Santa Straws”