There is something to be said about changing it up from the traditional, and Red Vines has done just that. This licorice candy is unique in many different ways, and they primarily just create their standard red licorice, although they do have a few other options too.

The company gives us a tasty twist on your everyday licorice, and it’s certainly one to take advantage of. Keep reading to learn more about Red Vines beginning, where they came from, and what you can find today.

The Red Vines name has been around for a lot of really great years. The brand is owned by the American Licorice Company, which is a small company located in Union City, California. The entire company focuses on red licorice candy, and Red Vines is one of their successful creations.

Red Vines were first produced starting in 1952. Their first flavor was actually a cherry flavor, and while the it has only changed slightly, what we know of as the Original red twist flavor, is no longer just simply a cherry flavor.

The company made slight changes to their original cherry formula to craft the original red. It certainly has some cherry to it still, but that’s not the only flavor it includes.

Even though Red Vines didn’t start production until the 1950s, the American Licorice Company has a history that extends beyond that. They actually started creating licorice back in the 1920s, more than 100 years ago. That initial licorice was raspberry in flavor.

It was their primary product until they changed their name to Red Vines and created the original red flavor that has since been adapted to be the signature offering.

Their main factory remains in Union City, California to this day. It’s an American owned and operated company. The process that they use to create their vines is unique, and it really always has been. They mix together their ingredients and put them into barrels to let the mixture cool.

After cooling, a machine pulls out the mixtures, and forms the long, twisted vines that we know and love. This factory really puts in the work, and can make up to 1 million pounds of Red Vines in a single week if they need to.

Through the years, Red Vines and Twizzlers have always been thought to be rivals. And while they certainly can compete against each, their products are both very unique and different from each other. Even the media has played into the role of pitting Twizzlers against Red Vines, but we can love them both!

You see some of that rivalry in shows like Parks and Recreation, where some of the people in the show argue about which one is better. There are other shows and marketing devices that have captured the same argument.

But in truth, both the flavors, designs, and textures are very different from each other. That rivalry primarily comes from various fans, rather than from the two brands themselves. A brand representative of Red Vines was quoted as saying just that in an interview.

When you compare the two, you quickly find differences, and it’s perfectly acceptable to enjoy both Twizzlers and Red Vines in their own right. And if you take a look at where these are more popular, it’s totally regional as it is.

In 2012, Red Vines experienced their one and only recall in the entire time since they have been around. The recall was announced by The California Health Department, and was specifically related to the black licorice product. One specific batch was notated as having lead contamination. No other products were affected.

Red Vines quickly handled the recall, took care of the issues, and went back to business as usual.

Red Vines in the Public Eye

We talked about seeing the rivalry in pop culture, but what about Red Vines alone? They have been seen on numerous movies and TV shows, and under a variety of different intentions too.

For example, on the TV show Fringe, you can Red Vines multiple times. It’s portrayed as Doctor Walter Bishop’s favorite candy, and found in several different episodes because of it. In one episode, he eats Red Vines while finishing an autopsy. Rumor has it that his fans bribed him and Fox with Red Vines to get a renewal for the series, and he was grateful.

Wayne’s World 2 has a Red Vines moment with a special dispenser in Garth’s car. It’s definitely a fun twist on these tasty treats. During the 89th Academy Awards, Red Vines were literally airdropped onto the stage.

There are a couple of SNL skits that featured Red Vines, or mentioned them at least. The most memorable is from 2005, during a short rap production from Andy Samberg. You can also find a song named “Cigarettes and Red Vines” on one of Aimee Mann’s albums from 1999.

These are just a few examples, but you can also find Red Vines on The Simpsons, as well as Law & Order: SVU if you look hard enough. Finally, our last mention is a musical from 2010, A Very Potter sequel. In this musical, Red Vines are Ron’s favorite snack. Some of the actors also created a YouTube channel to see what Red Vines could and couldn’t do, so be sure to check that out.

And if you want a creative use for Red Vines, try cutting off the ends and using them as a soda straw. It’s a tasty combination, and one you will probably get addicted to.

Red Vines falls under the American Licorice Company, but Red Vines is the primary production. It is the only branding that you will see on any type of packaging, which is because they are their own independent company and brand.

This is pretty unique. A lot of the popular candies out there have their candy brand, but they are often owned or produced under a much larger umbrella brand. That’s not the case here, though. 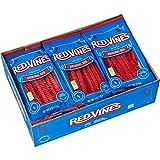 You can also buy Red Vines at Old Time Candy by clicking the image below.

While the original flavor, red, Red Vines is their primary product, there are a lot of other products and flavors out there now. The classic red original will always likely be their dominant option, but that’s not all they have to offer the world.

While we’re on the subject of flavors, did you know that they are non-GMO products? They are also certified as Kosher, which could be a benefit to many. Lastly, the company is designated as a zero waste facility, making efforts towards sustainability.

So, what are their flavors and products? First, check out one of their newer lines, which is Red Vines Made Simple. The Made Simple line is fat free, flavored with only natural flavors, and also made with real sugar, rather than other sweeteners. There are several products and flavors to choose from in that line.

Then, we have the standard Red Vines line. They have several flavors here too.

With the different flavors, they have a few different products. You can enjoy the regular twists, jumbo twists, or even bite-sized options too. And of course, they have that notorious big bucket of original red twists as well. In addition, they have a Red Ropes option that doesn’t have twists.

And finally, we’re getting into the holiday season, where you will see some of their holiday packages and offerings. They do put Original Red into some smaller stocking stuffer options. In some years, they have also had Gingerbread flavored twists, which could be a fun one too.

You don’t have to choose between Red Vines and Twizzlers. Red Vines are so unique in their own way, and certainly worth a try. Whether you decide to go with a big bucket to share, or grab yourself some bites, you won’t be disappointed.

They have been around for close to 75 years, and they are still going strong. This American-owned company has a lot to offer, and they keep the world stocked with their delicious, flavorful vines.

What flavor are Red Vines?

The original Red Vines were cherry-flavored, but in 1952, with a slight formula change, the Red Vines Original Red Twist flavor was introduced.

What are Red Vines?

Red Vines are a brand of red licorice candy.

When were Red Vines invented?

The American Licorice Company launched vines in the 1920’s but in the 1950s, the name was changed to Red Vines.