If you like slimy and you like sour, you really can’t go wrong with Toxic Waste candy. We get it. Who wants to eat candy that’s called Toxic Waste? Well, you might actually be surprised. It’s an ultra-sour concoction that people just can’t seem to resist.

If you follow Tik Tok at all, you might have even seen some of the challenges to enjoy this candy on video and let other people see your reaction to the sour. It’s like no other sour candy on the market!

The thing about Toxic Waste is that we really have very limited information about its history. However, we do know some so let’s talk about that. This candy is made by a company named Candy Dynamics Inc. The candy company is American-owned and you can find their headquarters in Indiana.

If you go looking for the Toxic Waste candy internationally, you’re not likely to find it very many places. You can find it in places like Ireland, the UK, and even South Africa but it’s pretty limited outside of those zones. The USA and Canady are the most prominent locations for this candy.

The candy has a unique style. The original option actually comes in a little barrel that looks like it has slime coming out of it. The barrel is marked as toxic waste, hence the name of the candy. It only seemed appropriate.

The design behind the candy was to bring people a sour candy that packed a lot of sour in flavor. It’s definitely one of the top when it comes to sour. Warheads have nothing on Toxic Waste – or at least that’s what we hear.

Each drum of “Toxic Waste” comes with 16 different pieces of assorted candy. There are 5 different flavors so your barrel will have a mixture of those. All of the flavors are sour. In fact, the candy has a hard outside that is sour, and when you get past that you have more sour from the inside of the candy.

It’s basically non-stop sour from start to finish. The five original flavors that the company started with are still the primary flavors. They have added more but we will discuss flavors later. They have come out with some other types of candy that are still part of the Toxic Waste lineup over the years but the drum of sour candies is still the primary concept.

While the candy is known for being sour, it also has a hint of sweet flavor behind that sour. and that sometimes helps people be able to suck on it longer. The pucker is always present though. In fact, they even put a warning label on the drums that you shouldn’t try it if you’re sensitive. It just adds to the fun.

The company has issued their own sour challenge. The goal is to beat someone else at how long you can keep the sour candy in your mouth. It’s just another fun way to enjoy the candy and maybe even get a little competitive with your friends.

When Was Toxic Waste Candy Invented?

Here’s where the details get a bit dicey. It can sometimes be challenging to track down accurate information for the history of a specific candy. However, what we know about Toxic Waste is that it started being sold in 2007.

This is when the first record of Toxic Waste candy from Candy Dynamics starts showing up. It has always been credited as the most sour candy on the market since that time. Even when you look at the Toxic Waste website, you won’t find much information there. You mostly just get pointed to the different types of candy that they have under this brand.

That’s ok though. 2007 at least gives us a starting point. While Toxic Waste candy is not as aged as some of the popular favorites out there, it has now been around for more than a decade and it’s still going pretty strong.

After the recent Tik Tok trends for the sour slime licker candy options, they can be really hard to find. The drums are easier to find than the Slime Lickers but people have turned to the traditional Toxic Waste candy when they can’t get the others so they are all popular and often out of stock now it seems.

Candy Dynamics is the company that created and owns Toxic Waste. From everything out there, it appears that Candy Dynamics was actually created specifically to start producing Toxic Waste candy.

They continue to have different types of candy under the Toxic Waste label but they stick to sour candies that fall under that particular line. We will cover those in flavor options but you will find they have a few great options depending on your preferences.

There was a time frame when the candy had a recall in its history but this happened back in 2011 and it appears that everything was ironed out and the candy continues to be produced and sold as normal now – if you can get your hands on it.

How Did Toxic Waste Candy Get its Name?

Toxic Waste candy is pretty self-explanatory when you look at the design.

We agree that it seems like an odd name for a candy but they took the name and ran with it. It’s named such because it is so sour that most people would probably compare it to toxic waste. Seems like a logical comparison!

Of course, the name really fits when you consider the design behind the brand. Their original candy was little barrels or drums that were covered in slime leaking from the top. Inside, you have the candy and the barrel is labeled as toxic waste.

It’s just a fun way to identify the candy and separate it from all of the other sour candy options out there.

Those were the original flavors but they’ve also added new flavors since that time. Here are some of the newer flavor options.

Different colors of barrels basically have different themes of flavors and each barrel has 5 flavors with 16 total candies.

Aside from these flavors of their candies in the barrels, Toxic Waste also has some other candy options outside of the barrel candies. This includes Smog Alert and Slime Licker. There have been some other things through the years but most of them have since been discontinued.

When it comes to buying Toxic Waste candy, it’s easy to find online. The bigger challenge might be finding it in the stores. It typically is available at various candy stores and might even be available at grocery stores or Wal-Mart if you’re lucky.

Availability seems to vary as some stores have some trouble getting shipments in. Production is more limited than candies like Hershey’s might be so batches get sent out regularly but their popularity recently has made them harder to keep in stock at most candy stores.

You will likely have better luck online but you can always check for options near you. 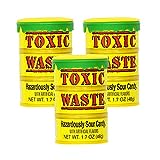 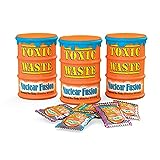 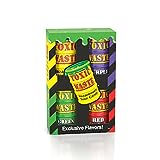 You can also buy Toxic Waste Candy at Old Time Candy by clicking the image below.