If you follow the trends or Tik Tok, then you have most certainly heard of the latest candy trend – Slime Licker candy. This candy comes from a brand known as Toxic Waste and since it debuted on Tik Tok and has trended there, it has been nearly impossible to find anywhere. It’s certainly out there but it sells out almost as quickly as they stock the shelves with it.

So what is it that makes this candy so popular? Well, that’s what we’re here to talk about. The Toxic Waste brand is nothing new. It’s been around for plenty of years but the Slime Licker really takes the cake when you want the latest and greatest candy.

So let’s take a look!

We know far more about the brand Toxic Waste candy than we do about Slime Lickers when it comes to the history. Let’s talk a bit about both.

Toxic Waste comes from a candy company known as Candy Dynamics. This is an American candy brand and you can find their headquarters in Indiana, Indianapolis to be exact. They sell candy primarily through the United States and Canada but they also serve some international locations like Ireland, South Africa, and the United Kingdom.

The candy we know as Slime Licker is just one type of Toxic Waste candy. The Toxic Waste brand is specifically known for selling candy inside of what looks like drum trash cans. They are made to look like they have good oozing down the side and labeled as Toxic Waste. It’s a fun and unique spin on candy.

This Toxic Waste candy is a sour candy that is a sour hard candy. The outside is sour and then once you get past the hard exterior, you have a sour chewy inside.

That was their original design but over the years they have expanded their brand just a little bit and that is where Slime Licker comes in. This candy from Toxic Waste is almost like no other candy on the market.

It has a roller ball on the top, affixed to a bottle of slimy, sour candy. You lick the roller ball and get to enjoy the sour slime on your tongue. It’s lickable like a lollipop but it’s just a sour slime really. It’s completely liquid and super sour at the same time.

Talk about packing a punch! That’s exactly what the Slime Licker does for you.

We’re not entirely sure how long this candy has been around but we do know that more recently it has become incredibly popular thanks to Tik Tok. Everything that hits Tik Tok almost becomes an instant trend and that is the case with Slime Licker as well.

If you like Tik Tok or like to follow the trends, you can look up a whole slew of people trying this extremely sour candy and then reacting to the sour. We’re not even talking Sour Patch Kids or Sour Warhead here. We are talking about EXTRA sour candy!

Of course, then there is also the trend of people putting other stuff into the bottle and licking that out of the roller ball instead. You just never really know what someone will have in their Slime Licker bottle.

Here’s the thing about Slime Licker though. We have little to no history on where the ideas came from or even when it was invented or began manufacturing. Really, we’re even pretty hard pressed to find a lot of history on the Toxic Waste brand altogether.

When Was Slime Licker Candy Invented?

Sadly, we just don’t have much background on Slime Licker candy. We know that it was made by the Toxic Waste company but we have no idea how long it has been on the market or who invented the candy either.

Slime Licker candy has become near famous just in the past year since tasting the candy became a major trend on Tik Tok. The candy made its debut there sometime around November or December of 2020 and it’s has been almost impossible to get your hands on pretty much ever since that time.

If you want to try it and you see it somewhere, definitely snatch it up!

Slime Licker Candy comes from the Toxic Waste brand. This brand of candy is all about the sour and Slime Licker is just one of their many flavorful selections. They also have their regular Toxic Waste candy and their Smog Alert candy.

Toxic Waste was always known for their waste barrels full of hard-shell sour candies but now Slime Lickers really take the cake. This candy has always been owned through the Toxic Waste brand and they will continue to be so.

The entirety of the brand is owned by Candy Dynamics Inc., which is an American-owned company in Indianapolis, Indiana. While the candy company is located in the United States, much of their candy is sold internationally and some of their lines are discontinued in the US but still available in other countries.

Slime Lickers and a few of the other varieties from Toxic Waste are still here in the US.

How Did Slime Licker Candy Get its Name?

Slime Licker is named exactly for what it sounds like. It’s a bottle full of liquid “slime” and you lick the candy. It only made sense to them to call it Slime Licker in the end, right?

Slime Licker is all about licking and then feeling the sour. The bottle of candy is only about 2 ounces but for some that will be 2 ounces that you simply can’t handle.

It’s completely a liquid candy but that little bit of liquid is packed full of sour flavor that will have you puckering right away. It comes in mostly 2 different flavors, including strawberry and blue raspberry.

Slime Lickers just comes in two different flavors to our knowledge. The flavors include strawberry and blue raspberry. These two flavors are more than enough for most people.

The brand Toxic Waste does have a lot of other options. Their biggest seller until the Slime Licker trend was always the Toxic Waste barrel of sour hard candies. These are still popular but not quite to the extent of Slime Lickers since their Tik Tok trending career began.

Toxic Waste has their barrels, as well as Smog Balls. Everything from the brand is exceptionally sour so if sour is the name of your game, you will most definitely like the various options from Toxic Waste. If you can’t seem to find Slime Lickers, go ahead and try one of the other options from the brand in the meantime.

Buying these candies can be a bit of a challenge right now. Their Tik Tok trending life made them nearly impossible to get your hands on. This is because they are just produced in low supply and really always have been. They are just far more known now than they ever were before. They sell out almost as quickly as they are stocked.

The stores that this candy is specifically stocked in includes the following. 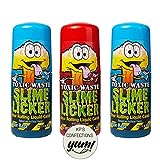 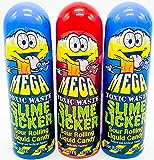 You can also buy Slime Licker at Old Time Candy by clicking the image below.