When you think of lollipops, one of the first brands that probably comes to your mind are Dum Dums. The Dum Dum lollipop is one of the oldest brands and most popular lollipops that are still in production today.

Let’s dig into the history of Dum Dums. Going from their creation in 1924 to being sold to their current owners, the Spangler Candy Company.

The history of Dum Dums

The creation of Dum Dums

During the early 1900s, the creation of lollipop processing machines began to be developed. Numerous candy companies began buying and developing their own lollipop making machine.

One of these candy companies included the Akron Candy Company located in Bellevue, Ohio.

They made a smaller variation of a lollipop that they would call a Dum Dum in 1924.

How did they get the name Dum Dums?

The person that came up with the name Dum Dums was I.C. Bahr. A sales manager for the Akron Candy Company.

Bahr’s reasoning for calling the lollipops Dum Dums was because it was an easy name for kids to say. Even an infant could learn the word Dum Dum and ask their parents to get one for them.

This name stuck and the lollipops have been known as Dum Dums ever since.

The early popularity of Dum Dums

Dum Dum lollipops quickly became one of the more popular hard candies in the US. The Akron Candy Company would release 7 original flavors that kids and adults loved.

Kids became passionate for Dum Dums and for only a penny or more, they could buy a lot of Dum Dums.

In 1953, after nearly 30 years after creating Dum Dums, the Akron Candy Company would sell their rights to the candy.

The rights to Dum Dum lollipops would be sold to the Spangler Candy Company. A much larger candy company than Akron Candy Company, who made them a large off they couldn’t refuse.

Along with the purchase, Spangler would move the location of the Dum Dum manufacturing plant. Moving the plant from Bellevue to Bryan, Ohio.

Under new ownership, the popularity of Dum Dums would expand rapidly. Thanks to Spangler having bigger and better processing machines, they were able to distribute and sell more Dum Dums.

They would begin processing thousands of lollipops daily. Way more than the Akron Candy Company were capable of making.

In the early years of Spangler’s ownership of Dum Dums, they tried to do one thing differently. That was attempting to change from paper sticks to plastic sticks.

The attempt of using plastic sticks was short lived as many customers complained about their potential for injury. Spangler quickly returned to using paper sticks which is what they have used ever since. 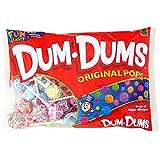 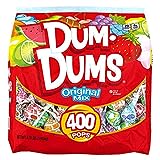 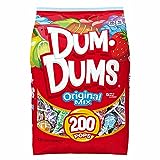 You can also buy Dum Dums at Old Time Candy by clicking the image below.

After becoming the owner of Dum Dums, they would begin to gradually introduce more variety of flavors.

To add to the original seven flavors, they would add:

A humanoid drum that was made to market to kids to buy more Dum Dums. Numerous different promotions were made using the Dum Dum Drum Man during the 1960s and 1970s.

The mascot isn’t used much today, but the mascot can still be seen by visitors that tour the factory.

What adds to the mystery is not one mystery flavor Dum Dum tastes the same. Honestly though, there really isn’t anything mysterious about the Dum Dum mystery flavor.

The truth is that mystery flavors were a way to sell excess lollipop flavoring. At the end of each day, the processing machine that makes Dum Dums leftover material in the machine.

As to not let the material go to waste, the workers began making Dum Dums out of the extra material. That is how mystery flavor Dum Dums were created.

The marketing of Dum Dums

You would think that to be around as long as Dums Dums have been that they have had great marketing campaigns. Their success is actually quite the opposite.

The Spangler Candy Company has really changed much of anything about Dum Dums since acquiring the candy in 1953. Other than adding 11 other flavors along with the 7 original flavors.

Even the logos and wrappers haven’t changed much in the 70 years since the Spangler Candy Company bought Dum Dums.

This lack of marketing has actually not hurt the sale of Dum Dums at all. They let the flavors speak for themselves and people continue to buy millions of the product every year.

Fans of Dum Dum lollipops seem to enjoy the nostalgia about the candy and feel like nothing needs to be changed.

Originally, there were only 7 flavors when the Akron Candy Company first created the lollipop. Then after the Spangler Candy Company bought the rights to Dum Dums, the flavors expanded to 18.

Dum Dums are not the only popular candy that the Spangler Candy Company is known for making.

Some other popular candies that they’ve created or owned include:

The Spangler Candy Company actually makes 45% of the candy canes produced in the US.

A few years ago, Spangler candy actually made an ad to advertise Dum Dums. This was the first ad they had done for the lollipops in over 30 years.

Rget haven’t changed much, but that seems to be what their loyal customers like most about the candy. Fans of Dum Dums have continued to support their favorite lollipop for over 100 years.

More than likely, your grandkids will also enjoy Dum Dum lollipops in the future.