Talk about a really great cereal that has had its ups and downs through the years. Waffle Crisp cereal is one of those. And now is the time to really get familiar with Waffle Crisp because it just returned to the market recently after several years off the shelves.

Waffle Crisp is flavorful and fun. It’s definitely worth a try! Let’s take a closer look!

Waffle Crisp is a fun cereal. It’s made by Post Consumer Brands. It’s simple but flavorful which has made it a fun choice for cereals. If you’re not familiar with Post Cereal, most of their flavor options come in bags instead of cereal boxes. You might be able to occasionally find boxes as well.

Waffle Crisp first came out in 1996, more than 25 years ago. There is also a spin-off to Waffle Crisp that is called Waffle Crunch. Both are made by Post. Waffle Crunch was made to be part of a budget cereal line so it is just slightly different overall.

On the same note, the brand manager also decided to bring back several other favorites from Post around the same time. Why reinvent the wheel when you have people calling for some of their favorites to return?

We don’t know a lot about the total history of their cereals but we are impressed by the action of the company to bring back fan favorites. Most brands just ignore these requests. They return some limited edition choices. However, for the most part, when they discontinue a line they never return to it.

Waffle Crisp cereal had a really fun outlook when it was initially introduced. In fact, the very first mascots of this cereal were grannies. The advertisements showed these loving women cooking each and every tiny waffle piece-by-piece.

As time moved on, they adjusted their advertisements. There wasn’t necessarily a mascot to be considered but you might remember commercials of the young kids trying to steal the secret recipe. This particular commercial was in the 1990s.

The commercial showed a group of kids that loved Waffle Crisp cereal. They attempted to get in and get cereal, a secret recipe, or maybe even both and they get caught in the process. Another moment of fame is when the cereal was shown in the TV show Friends. Joey enjoyed a box sitting in his recliner one day.

Some more advertising history includes “Waffle Boy” who was a waffle that wore red tennis shoes. He certainly would fall under the mascot category. He was a super hero and protected Waffle Crisps from Professor Burnt Toast. We’re sure the Professor just wanted a bite of the delightful cereal!

The brand even created an online video game of sorts at one point. The game was available on postopia.com at the time. That site is no longer available. However, on the site you could play games like Waffle Boy’s Jungle Adventure or Waffle Boy’s Extreme Bike Mountain Adventure.

In the game Waffle Boy battled against the Professor to save the day for Waffle Crisp cereal.

Finally, the brand apparently tired of Waffle Boy at some point. Either that or they simply were trying to come up with something new. They eventually replaced Waffle Boy with Bronk, who was a dinosaur.

There is certainly some fun history here to be noted. And now Waffle Crisp has returned after their 3-year hiatus. Does it really get any better than that? 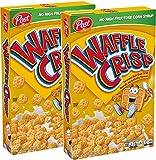 When Was Waffle Crisp Invented?

Waffle Crisp first came out in 1996. It’s not been in production for 25 years. We do want to point out that the cereal was discontinued from 2018-2021. Post discontinued the cereal. It wasn’t their first cereal to discontinue and we’re certain it won’t be their last.

However, one unique thing about the company is they listened when customers begged for the return. Waffle Crisp and some other fan favorites, like Oreo O’s, have been brought back based on the feedback from customers.

You can find tons of articles on the excitement of the return of Waffle Crisp. While Post clearly thought it had run its course, the faithful customers apparently did not agree. It’s refreshing to know that there are brand managers out there that still listen to what customers have to say.

While It’s always great to be innovative and come up with new ideas, sometimes it’s also great to keep the favorites or return the favorites to the shelves.

Waffle Crisp is owned by Post Consumer Brands. Post is well-known for making a budget-friendly cereal line. In that line, they also have Waffle Crunch which was made as a spin-off to Waffle Crisp.

Most of Post cereals are sold in bags rather than boxes. The bags can be sealed in between uses to help keep the cereal fresh. It’s just something that sets them apart. Post has been the owner of this cereal from the beginning and it has never changed hands.

That is another unique thing about the cereal. However, we find that most cereal options don’t change ownership as often as many other brands out there tend to do.

How Did Waffle Crisp Cereal Get its Name?

Waffle Crisp cereal was named because it is made of crispy little bite-sized waffle pieces. Each little piece is shaped and imprinted just like a waffle. But the cool thing is that these waffles are tiny. They are the size of most other cereal pieces out there.

The cereal has the little waffle bits, which are crispy and crunchy. Each waffle bite is covered in maple syrup. It’s truly like eating a bowl full of waffles. Of course, this means that you can enjoy it dry for a snack or you can add milk and have a tasty bowl of cereal.

Waffle Crisp never had any other flavor varieties with it being a simple cereal. However, we do want to point out that Post made a spin-off to Waffle Crisp that was named Waffle Crunch.

Waffle Crunch was introduced into a line called Good MOREnings. The intention of that line of cereals was simply to offer some budget cereals for people who needed more affordable breakfast solutions.

Waffle Crunch was made to be very similar to Waffle Crisp but was simply placed in the alternative line.

Waffle Crisp cerealhas certainly had a fun history. It’s easy to look back and reminisce on stories like the grannies making each waffle or even the kids breaking into the factory. These easily could be commercials that you remember from your childhood about the cereal.

While this cereal had a short stint of not being available for about 3 years, it is back in full swing now. Fans could not have been any more excited about bringing a favorite product back to the market. Post made an effort to listen to their fans and brought the cereal back to store shelves after 3 years of Waffle Crisp being discontinued.