Cheetos Puffs, those airy, crunchy, cheesy treats that melt in your mouth and leave their mark on your fingertips, first hit the chip aisle in 1971. But their origin story begins much sooner, with Crunchy Chee-tos, which were introduced to the world in 1948. Fifty years later, the company dropped the hyphen in the name but kept the same delicious taste.

Cheetos Puffs and Crunchy Cheetos were the brainchild of Charles Elmer Doolin, who had previously come up with the winning snack food Fritos. Eventually, Doolin joined forces with H.W. Lay and Company, and the hugely successful Frito-Lay empire was born in 1961. Just four years later, Frito-Lay became a part of the Pepsi-Cola Company, now PepsiCo.

How Are Cheetos Puffs Made?

The base for Cheetos Puffs is made from two simple ingredients: cornmeal and water. But not just any cornmeal: The cornmeal used for Cheetos Puffs is carefully chosen to ensure that the texture is super fine and that the moisture content is low. These are essential to providing the right texture and puffiness.

Once the cornmeal and water are mixed to the desired consistency, the dough is quickly extracted and loaded into something called an extruding machine. That machine exposes the dough to heat, moisture and pressure.

Then the dough makes its way through the extrusion chamber, where it gets steamed and exposed to high and low pressure, which makes it puff. Eventually the dough takes shape: Into snake-like tubes called “collettes.”

The collettes are cut to size and dried out in a large oven. Next, they are sprayed with vegetable oil and dusted with their flavoring (can you say cheese?) and seasonings and tumbled to be sure they are perfectly oiled and coated. They dry out again and then finally make it to packaging, distribution and eventually into your hands.

Speaking of hands, there’s a name for the dust that sticks to your fingers when you are eating Cheetos Puffs. It’s called “cheetle.”

Cheetos Puffs come in quite a few varieties. Some, like Flamin’ Hot Cheetos Puffs, are extremely popular. Others have not exactly been such hot commodities and have been discontinued.

Here’s a list of some of the discontinued flavors.

All told, including all the 21 different types of Cheetos that have been sold in North America over the years, Cheetos has been ranked as the top-selling brand of cheese puffs, with annual sales as much as $4 billion. Cheetos are sold around the world, and some countries offer flavors made with regional flair, such as the strawberry Cheetos Puffs sold in Japan.

The janitor’s idea is met with some resistance, but nonetheless the flavor gets made, and the janitor rises in the company, eventually becoming a director and overseeing areas that included marketing and new product development.

As this tale became more and more public and eventually was greenlit as a movie involving Eva Longoria, the story started to crumble. Frito-Lay calls it an urban legend. The company did an internal investigation and revealed that the Flamin’ Hot Cheetos were tested years before the janitor, whose name is Richard Montañez, began working for the company. While Frito-Lay is careful not to diminish Montañez’s overall contributions to the company, they do insist the Flamin’ Hot Cheetos story just isn’t true.

The story is more typical corporate team and less unknown underdog dream. A team of snack food pros who worked for Frito-Lay came up with Flamin’ Hot Cheetos Puffs in 1989 as a way to compete with spicy snacks that were a hit in inner cities. The “Flamin’ Hot” name is credited to a young employee named Lynne Greenfeld.

When she heard the story Montañez was telling at speaking engagements and then his own book, she raised doubts. Her questions are what led to the Frito-Lay investigation and the denial of Montañez’s claim to fame. Since then, other employees who worked for Frito-Lay when Flamin’ Hot Cheetos Puffs were developed have come forward with stories of their own about their contributions to making the iconic snack. 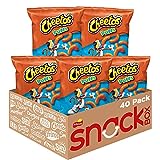 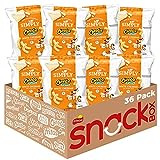 Cheetos debuted their first mascot in 1971. The character was an animated mouse who spoke with a formal accent and wore a three-suit. His slogans included, “Chee-tos. Cheese that goes crunch!” and “Hail Chee-sar!” The Cheetos Mouse appeared in commercials and other advertisements for about eight years, before it was retired.

In 1986, Chester Cheetah became the mascot for Cheetos Puffs. Unlike his slightly uptight mouse predecessor, Chester was designed as smooth-talking, sometimes trouble-making character. His slogans included “The cheese that goes crunch!” and “It ain’t easy bein’ cheesy” from the mid-1980s to the mid-1990s. His signature slogan became “Dangerously cheesy” in 1997.

The more cunning Chester started appearing in 2008, when Cheetos Puffs marketing shifted away from a child audience to a more grown-up market. Chester appeared in ads suggesting people use Cheetos to their advantage, making a splash with a Super Bowl commercial where loud, crunchy Cheetos interrupt an obnoxious person chatting on a cell phone at a restaurant. This sly, more conniving version of Chester is used to advertise Cheetos Puffs today.

Just when we thought celebrities were different than the rest of us, we learn that they are just as susceptible to the lure of a crunchy, airy, cheesy treat.

The list of celebrities who have shared their love for Cheetos Puffs includes Kim Kardashian, Selena Gomez, Rihanna, Britney Spears, Katy Perry, who dressed as a Cheetos Puff for Halloween), Madonna, Iggy Azalea and Kylie Jenner.

Cheetos Puffs: Not just for eating

In 2017, one Cheetos Puff – a Flamin’ Hot variety— was purportedly worth a whopping $99,000. Why so much? The Cheetos Puffs snack looked like the Internet-famous gorilla Harambe, whose story became famous after he was shot and killed in the Cincinnati Zoo. As it turned out, the buyer who offered the $99,000 for the Cheetos Puff backed out of the sale. The story made headlines, and was featured on late-night TV nonetheless.

Another Cheetos Puffs story that grabbed attention was a creation by Orlando artist Mateo Blanco, who created a cheetah statue using nothing by Cheetos snacks and glue. Blanco carefully sliced Cheetos Puffs to use for the sculpture and used makeup brushes to contour the crevices and add dimension to his creation.

How are Cheetos Puffs made?

The first step in the process is mixing cornmeal with water, which creates a batter. The batter then passes through an extruder, which gives Cheetos their unique shape. At this point, the snack has the yellow color and consistency of a rice cake.
The uncooked Cheetos then pass through a fryer, where they are cooked at a temperature higher than 300 degrees.  After this, comes the cheese.
Powdered cheddar cheese is mixed with oil and other seasonings and then applied to the Cheetos, giving them the taste we all know and love and their distinct bright orange color.