Cheetos are the snack that everybody enjoys. And you always know when someone has been eating them thanks to those orange fingers. Through the years, the Cheetos brand has come out with so many different fun things and you really can’t go wrong. From popcorn to crunchy to paws and everything in between.

This delightful snack certainly has a lot going for it. Check out the information below to learn more about the tasty treat!

When Cheetos first came out, they were actually labeled as Chee-tos. While it’s not a huge difference, it was how every bag or product was labeled up until 1998 when they chose to make it simple. That’s what it has been ever since then.

This brand is owned by Frito Lay and has been since they were introduced. The very first product was the original crunchy corn puff and it came out in 1948. The first Cheeto was made by a gentleman named Charles Doolin, who was a creator for the Frito company at the time.

At that time, Frito and Lays were two separate companies so Frito originally created the Cheeto and then shortly after that Frito and Lay merged to create the Frito-Lay company we know today. Sources say that perhaps the development of Cheetos was what sealed the deal. That merger too place in 1961.

Cheetos are a cheese puff, as was the original design more than 70 years ago. The puffy chip is coated in orange cheesy powder and oh so yummy. Your fingers are definitely going to turn orange when you’re eating them but for some people, that’s part of the fun. Apart from that first cheese puff, now Cheetos has more than 20 different products in chips alone.

They’ve even created some products that fall into other areas, such as their mac and cheese line with different flavors. Cheetos are available throughout the world. The majority of their products are in North America but they do have several products spread throughout at least 36 countries. They create products that seem suitable to the culture and location so what is available in one country might be completely different from another country.

When Cheetos were originally made, Mr. Doolin wasn’t able to keep up with demand. They immediately became popular and his location simply didn’t have the capacity for heavy mass production, which is where the Frito-Lay merger came into play. Later, Frit-Lay came under the ownership of Pepsi-Cola Co through a merger.

When Cheetos first became a big deal there were only four heavily popular snack food brands. By 1965, distribution expanded globally because of the huge demand and success for Cheetos. They were already pulling in revenues over $125 million at the time. When Cheetos came out, there were no other brands creating the same type of cheese puff snack. However, some brands picked up on the inspiration and tried to create similar items. None of them were ever able to outdo Cheetos but they still have seen some success.

Some of those competitors include chip brands like Utz, Herr’s, Wise Cheez Doodles, and even Planter’s. Many of these are regional and certainly not global. Some of them are very good but still don’t hold a candle to Cheetos. The Cheetos brand has remained the top-selling cheese puff in American through the years.

Now, with the expansion and global distribution, Cheetos remains a massive industry. The brand is said to produce approximately $4 billion in annual sales and is one of the largest brands under the PepsiCo title.

Most people think that the original Cheeto was the Puffs but it was actually the crunchy version. In fact, crunchy Cheetos were the primary option from the brand for more than 20 years before they expanded and added the Puffs. Those were not added until about 1971. Since then, they’ve added baked, popcorn, and a variety of flavors as well. They also have some different shapes, like the Paws that are popular. And if you can find “Munchies”, Cheetos are a part of this snack mix too.

There have been several different marketing ploys through the years. You probably recognize the cheetah that has been a big part of the brand. Some of the current marketing depicts a woman who has been snacking on Cheetos and has orange fingers. She needs to drive her car and looks down at the orange. The laugh line is that this is what drove inspiration to create self-driving cars.

When Were Cheetos Invented?

Cheetos were first invented in 1948 by Charles Doolin, who was a creator for the Frito company at the time. This was his company back then. He had no idea just how popular Cheetos would become and how they would take off.

It has now been more than 70 years and Cheetos continue to be popular and loved around the world. It didn’t take long for them to grow into a multi-million dollar snack food and they have only grown from there into what is now a billion-dollar industry each year. This encompasses everything sold in North America as well as more than 30 other countries globally. It’s a massive compilation.

The current ownership of Cheetos falls under PepsiCo, which is the umbrella that holds the Frito-Lay company. Originally, Cheetos were part of Frito, as the creator worked for that company. However, as they became popular, Frito was unable to keep up with production and demand, leading to the need to come up with other solutions and ideas.

In 1961, Frito came together with a man named Herman Lay and together they created Frito Lay as we know it today. That was in 1961. In 1965, Frito Lay merged with Pepsi Cola into what we now know as PepsiCo. So, Cheetos fall under the PepsiCo umbrella, through Frito Lay ownership and branding. 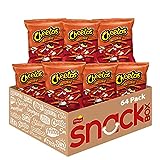 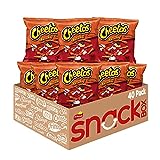 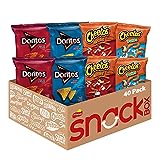 What started out as simple crunchy Cheetos eventually grew. After more than 20 years of only offering crunchy Cheetos, the Puffs version were born. After that, the brand added several different flavors and varieties and have grown to have more than 20 flavors in North America alone.

These are the current flavors on the market.

In addition to the chips and popcorn listed above, Cheetos also now has macaroni and cheese options that are certainly wild. They have a jalapeno & cheddar, flaming hot, and a regular cheddar option for these. They come in full boxes or even in individual serving containers.

This is just barely touching the surface of what you can do with Cheetos. There are a host of recipes out there to enjoy as well.

Cheetos have always been a popular chip or snack but this billion dollar brand has far more than most people are even aware of. With 20+ flavors in the United States alone, that’s saying something. When you consider there is production in more than 30 countries and some unique flavors in each country, this simple snack certainly has a lot going on!

Show us your orange fingers!

Flamin’ Hot Cheetos were invented by Richard Montañez, a Mexican-American janitor at Frito-Lay who went on to become a company executive.

How are Cheetos made?

The first step in the process is mixing cornmeal with water, which creates a batter. The batter then passes through an extruder, which gives Cheetos their unique shape. At this point, the snack has a yellow color and the consistency of a rice cake.
The uncooked Cheetos then pass through a fryer, where they are cooked at a temperature higher than 300 degrees.  After this, comes the cheese.
Powdered cheddar cheese is mixed with oil and other seasonings and then applied to the Cheetos, giving them the taste we all know and love and their distinct bright orange color.

When did Hot Cheetos come out?

According to Frito-Lay records, Flamin’ Hot Cheetos, a spicy version of the product, was developed at the company’s headquarters in Texas starting in 1989.

What are Cheetos made of?

When were Cheetos invented?

Cheetos were invented in 1948 by Fritos creator Charles Elmer Doolin.

Cheetos are owned by PepsiCo.

How many calories in Hot Cheetos?