Kool-Aid is perhaps one of the longest-standing popular drinks in history. It’s incredibly affordable to use and it comes in tons of different flavor options as well.

This term inspires excitement and maybe some great memories of a childhood with a red mustache from the glass of Kool-Aid you enjoyed after playing outside or on a hot summer day.

Many of us remember the Kool-Aid man (that giant pitcher) on the fun commercials but this drink has been around making memories since 1927!

Kool-Aid is an American-based brand. It is owned by the Kraft Heinz company out of Chicago, Illinois.

First created in powder form, which is still the primary form, in 1927. It was created by Edwin Perkins. He formulated the idea from a product known as Fruit Smack, which was a liquid concentrate that was popular at the time.

Edwin Perkins was from Hastings, Nebraska. He did a lot of experimenting when it came to the kitchen – usually in his mother’s kitchen. Ultimately, Perkins was looking for a way to slightly mimic Fruit Smack but not have to be in liquid form. The product of that experimentation was Kool-Aid.

This creation helped significantly because no longer were there overbearing shipping costs like what Fruit Smack required since it was a liquid. This was an all-powder creation that made it so much easier!

In 1931, production was moved over to Chicago from Nebraska. In 1953, Perkins sold Kool-Aid to General Foods. Since that time, Kool-Aid now belongs to Kraft Heinz.

If you take a look at Hastings, Nebraska, you will find that there is still an annual festival that takes place there called Kool-Aid Days. It takes place every August on the second weekend of the month and has been going on for many years.

The festival is a great way to commemorate the true origins of Kool-Aid and celebrate the drink still – long after it has moved on to other sources. Nebraska as a whole claims Kool-Aid as their official soft drink, which is pretty neat.

There have been many different flavor options over the years. Some flavors have remained a standard in the line never to change or be removed while other flavors come and go. They’ve also added some other lines and beverages, like the Kool-Aid bursts that are already mixed to liquid form with a little twist-off cap.

They also have Kool-Aid drops that you can mix into your water to instantly flavor it to one of the original Kool-Aid flavors. Of course, there is also jello and other things as well. There will always be spin-offs and additions to the line.

You will find that there are Kool-Aid collector’s items out there that are worth significant amounts of money. It’s similar to things like Coca-Cola memorabilia in a sense.

One unique addition to Kool-Aid was a contract with Soda Stream to have Kool-Aid flavors available to be used in combination with the Soda Steam machine that people use to make sodas in their homes. That agreement happened in 2012, between Kraft and Soda Stream.

While there are a lot of different products on the market now, the most common and most popular is still the powder Kool-Aid. This powder mix is simply mixed with water and sugar to create a sweet, flavorful drink that everyone can enjoy.

When Was Kool-Aid Invented?

Kool-Aid was originally created in 1927. Edwin Perkins did a lot of experimenting in his mother’s kitchen. He had previously created or enjoyed a liquid drink known as Fruit Smack, which led him to experiment with removing the liquid and creating a mixable powder that could be added to water when you were ready to enjoy it.

This creation happened in Hastings, Nebraska. Production has since moved to Chicago, Illinois and is now under the rule of Kraft Heinz. However, Nebraska, particularly Hastings, remain proud of the invention that started right there with them and they continue to celebrate it with Kool-Aid days.

This festival is enjoyed every year, on the 2nd weekend of August.

Kool-Aid was invented by Edwin Perkins in 1927. It was so great that almost 100 years later, it continues to be a popular drink that many homes keep around for children and adults to enjoy. There are many different varieties of Kool-Aid.

The original powder form was made to reduce the high shipping costs of a popular drink named Fruit Smack that Perkins has previously enjoyed or created. The small town of Hastings, Nebraska has always been proud of being the roots of this invention from Edwin Perkins.

Production was later sold to General Foods and since that time has come under the influence of Kraft Heinz.

Kool-Aid was originally owned by Edwin Perkins when he created the powdered drink mix in 1927. In 1931, he moved the operation to Chicago, Illinois. Perkins sold Kool-Aid to General Foods in 1953.

We’re not sure the extensive history of partnerships, acquisitions, or sales but now Kool-Aid is owned by Kraft Heinz and has been for many years. There is a partnership between Kraft Heinz and Soda Stream to have Kool-Aid flavors available for the in-home soda stream machine that allows you to make soda at home.

You will see the Kool-Aid man on packaging as well as advertisements like commercials and ads that play for Kool-Aid. He has remained a mascot with only a few minor changes to his character over the years.

You may remember the Kool-Aid man as bursting onto a scene and using the phrase “oh, yeah!” which has always been the style and the catchphrase associated with him. He has been used for ads of all kinds and is often sported on packaging as well.

Interestingly, it appears that advertisement has become more focused on the Latino community, as a larger percentage of their supporters are Hispanic. They’ve made a push for Latino marketing for this reason.

The mascot man found his biggest change in 2013. Rather than just a large pitcher, it became a pitcher with a body, including arms and legs almost like a human. The Kool-Aid man is now a CGI character and has continued to be popular with the changes.

While you can easily purchase in the store, you can also commonly purchase it online. You can check out the Kool-Aid website or you can find it at any online retailer. You can also find it from places like Amazon or other similar online entities. 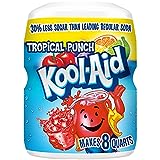 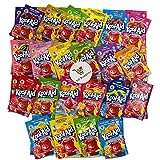 Kool-Aid originally was available in 6 primary flavors. Those flavors are still a part of the line and are still available today. Since that time, they have added a ton of other flavors and several other lines. They also have a sugar-free flavor line as well.

Here are the 6 original Kool-Aid flavors.

Of course, we know that when you visit your local grocery store, you will find a whole section of flavors. Again, some flavors have come in and out over the years and some are available in only certain items.

Here are some of the other flavors that have circulated through the years.

There may be other flavors out there and keep in mind that some of these flavors are potentially past flavors that you can no longer find in the store. However, this gives you a good idea of the number of flavors they have had.

The original 6 flavors are still in production and a good number of other flavors are readily available out there too!

Here are the ingredients for Kool-Aid.

You can buy Kool-Aid just about anywhere you go. You can find it sometimes in gas stations and restaurants but the availability varies.

You can find it most often in powdered form at places like your local grocery store or perhaps even a big box retail store like Wal-Mart or Target.

Across the board, you can find it at just about any store that has drink aids or groceries. It’s found in the aisle with other drink mixes and flavors.

When was Kool-Aid invented?

Kool-Aid was originally created in 1927. Edwin Perkins did a lot of experimenting in his mother’s kitchen. He had previously created or enjoyed a liquid drink known as Fruit Smack, which led him to experiment with removing the liquid and creating a mixable powder that could be added to water when you were ready to enjoy it.

Where was Kool-Aid invented?

The small town of Hastings, Nebraska has always been proud of being the roots of this invention from Edwin Perkins.

Kool-Aid is perhaps one of the longest-standing popular drinks in history. It’s incredibly affordable to use and it comes in tons of different flavor options as well.

What is Kool-Aid made of?

When is National Kool-Aid day?

The 2nd Weekend in August.

How much sugar is in Kool-Aid?

How many calories in Kool-Aid?

How much Kool-Aid is in 1 packet?

Every single sachet makes approximately 2 liters of the drink.