Do you love the Mounds candy bar? Who Doesn’t, really? Even if Coconut is not your favorite candy ingredient, you probably at least have some fond memories of the commercials you saw or heard as a child. Keep on reading to learn more about this delicious dark chocolate and coconut treat that has been around for more than 100 years.

The Slogan We All Know and Love

“Sometimes you feel like a nut, sometimes you don’t. Almond joy got nuts, Mounds don’t.” This timeless slogan compares the difference between an Almond Joy candy bar and A Mounds candy bar, both originally created by the Peter Paul Candy Company. Anyone who grew up between the 1970s through the 1990s (possibly beyond) knows this slogan.

It was one of the most successful slogans in advertising history. We know this because all you need to do is start the saying to someone else – say, “Sometimes you feel like a nut,” and that person will not only know what you are referencing, but they will probably finish the rest of the slogan, maybe even singing it!

The History of The Mounds Bar

The Mounds candy bar is currently made by The Hershey Company. However, this was not always the case. Mounds was initially created by a candy maker named Vincent Nitido. Vincent lived in West Haven, Connecticut, and sold a single piece of Mound’s for 5 cents. He created this delicious piece of candy in 1920, over a century ago.

In 1929, the Peter Paul Candy Manufacturing Company bought this candy bar and started selling them. They still sold them for 5 cents, but now the consumer received 2 pieces of candy instead of 1.

During World War II, there was a shortage of ingredients, including chocolate and coconut. There was a point when the Peter Paul company stopped making this candy for a while due to wartime shortages of materials and ingredients.

Over time, the Peter Paul Company added other popular candy selections today, including Almond Joy, Cadbury, and York Peppermint Patty. In 1978 they merged with Cadbury. In 1988 the Hershey Company acquired the rights to Almond Joy and Mounds by buying the Cadbury company.

While it is accurate that ingredients became problematic during World War II, there was a time when the company tried to just change where they got their coconut from, and they did this for a while. Initially, the coconut they used came from the Philippines, but they needed to find a new supplier during the war. They did. The company started getting their coconut from the Caribbean.

The company owned a small fleet of vessels that they used to transport the Caribbean-sourced coconut to the United States. This fleet only comprised of seven sheets and had the nickname of the “Flea Fleet.” Because the fleet was so small, the Germans did not bother with them at all since all they were doing was transferring coconut from the Caribbean to America for candy production.

Well, at least that is all the Germans were led to believe was happening.

The fleet traveled to several different Caribbean islands to get the required amount of coconut needed. Then they traveled to plants in Puerto Rico and Florida for processing. Although the people doing this work were not soldiers or affiliated with American Armed Forces in any way, they still wanted to help.

What the German commanders did not know was that the crews working for the “Flea Fleet” were actually sharing intelligence with the American Armed Forces. This intelligence included where the German Fleet was, how many ships there were, and their movements.

So that is how the Mounds Candy Bar helped with espionage during World War II.

What is in a Mounds Bar?

A Mounds candy bar has sweetened coconut covered in rich dark chocolate. The candy bar itself is sold with two separate candy bars each, just like its counterpart, the Almond Joy.

We have already discussed one of the biggest and most recognizable slogans – which is the “sometimes you feel like a nut, sometimes you don’t, Almond Joy has nuts, Mounds don’t” slogan. However, this was for an advertising campaign for both the Mounds candy bar and Almond Joy. It was meant to link them together in people’s minds and ensure that everyone could enjoy chocolate and coconut, regardless if they prefer milk chocolate or dark chocolate, nuts or no nuts. It was brilliant, and it worked.

However, Mounds itself already had a slogan that was solely about the Mounds bar. This slogan was the original slogan, and it is “Indescribably Delicious.” Although this slogan has been used for both the Mounds and the Almond Joy, it came about in a contest they had for people to come up with two words to describe the Mounds candy bar.

The winner of this contest was Leon Weiss, and for winning the contest, he received $10.00. Although it is no longer printed on the packaging, for a long time, it was. It said, “Mounds. Peter Paul. “Indescribably Delicious.” 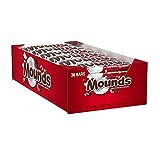 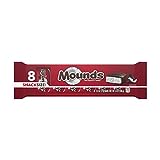 When you are looking at a product that is over a century old, you will be able to find tons of advertising that they made over time. How we advertise goods and services today has certainly changed over the years. These days, many people do not read traditional newspapers or magazines, and many people stream videos instead of watching traditional television. Because of this, advertising has moved to contextual internet ads, ads on social media, and product placement. However, this was not always the case.

In the 1950s, there were a ton of different Print ads. These ads are not only available on the internet for viewing, but you can actually buy some of these ads for collections to display.

Some phrases and wording used in these ads include:

Currently, the Mounds candy bar has red and white packaging. The Almond Joy is blue and white. They are designed to be related and connected. However, this is not always the case.

Since Mounds has been around for over a century, the packaging and design have changed a few times. However, red was always a common element, just not as prevalent as it is now. Currently, the Mounds candy bar packaging is monthly red. The word is in brown, and it says dark chocolate and coconut underneath it. It also lists the calories on the front of the packaging, which is a common design element for all packaging these days.

In the recent past, it also said the old owner’s name – Peter Paul. In the distant past, there were various elements and words such as advertising that it is a double bar, listing pricing (10 cents), and of course, one of their slogans, indescribably delicious.

The packaging is currently in a common plastic wrap, but it also came in tins to ensure freshness in the past.

In 2006, Mounds released a limited edition bar called Mounds Island Orange. This was a candy bar that was orange in color and had orange-flavored coconut.

When you read the history of a candy bar that is more than 100 years old, it will not be surprising when you find references in pop culture to this item. Here are some interesting mentions of the Mounds Candy Bar.

This candy bar was mentioned in Philip Roth’s debut novel, Goodbye, Columbus. The Aunt and the uncle of the main character were “charing a Mounds Bar in the cindery darkness of an alley.”

Did you know that Joe Swanson of Family Guy lists his favorite candy bar as the Mounds bar? In the episode entitled “Finders Keepers,” he states that he has eaten Mounds bars “two or three times a day for the past 25 years.” Now that is some serious commitment to your favorite candy bar.

Comedian Louis C.K. Mentioned this candy icon in an opening monologue of the popular NBC show Saturday Night Live. This one is not endearing, but he compared his love of the Mounds bar with a child molester’s love for molesting children.

Because of the popularity of dark chocolate and sweetened coconut, the Mounds candy bar has inspired generations of home cooks and bakers to create their own versions. Although the candy bar is the original and possibly the best, there are many ways to include this flavor in desserts. They were all inspired by the original Mounds candy bar. Some of these homemade recipes include chocolate and coconut cakes, blondie mars bars, Mounds-inspired brownies and cupcakes, icebox pies, and homemade candy bars.