Pop Rocks are one of the most well-known and popular candies in the US and this is for good reason. There are few candies that are this much fun to eat and you have been missing out if you have never tried this tasty and fun candy snack. Pop Rocks are an eating experience as much as they are an enjoyable candy and you will probably be enchanted by these popping snacks as soon as you try them out!

Pop Rocks candy comes in a variety of flavors and all of them are equally fun to eat. For those who know about the enjoyment of eating this special candy, the history of the brand might be less well-known. If you are ready to learn some more about this popular and exciting little candy snack, you need to read on!

This candy is currently owned by Zeta Espacial S.A. Pop Rocks were originally patented by General Foods with the help of chemists William A. Mitchell and Leon T. Kremzner in 1961. The treat was not actually sold until 1976, despite the date of the patent for the process that makes them snap and pop in your mouth.

General Foods made the candy for a time and then pulled it from shelves in 1983 stating that its short shelf-life was a stumbling block for sales. If you have ever ended up trying to eat an older package of Pop Rocks or one that has gotten torn open just slightly, you can vouch for the sticky, gummy, and altogether unenjoyable nature of this candy when it has gone bad.

Kraft Foods licensed the candy to Zeta Espacial S.A. so that the candy could be made by the other company with the Pop Rocks name on it. Zeta Espacial S.A. eventually bought the candy product from Kraft and they are the current manufacturer and owner of the product. Their main distribution center for the candies is in Georgia but the home base for the company is actually in Barcelona, Spain. This company sells other items around the world that are similar such as Peta Zetas, Wiz Fizz, and Magic Gum.

Marvin J. Rudolph, who was part of the team that took Pop Rocks to manufacture when Kraft was making the product, wrote a book about the candy called Pop Rocks: The Inside Story of America’s Revolutionary Candy. This book told the story about the development of the unique candy that pops in your mouth and talked about the original marketing challenges that later led to the product being pulled from shelves. Rudolph says that part of the trouble that led to pulling the candy off of shelves was a flood of competitors’ products onto the market.

General Foods also made another product, called Cosmic Candy, that was similar and was in competition with Pop Rocks at this time. There continue to be copies of the candy that are made like the Popping candy that is made by HELKS and Cadbury’s Australian product called, “Marvellous Creations Jelly Popping Candy Beanies”. Despite the competition, this candy continues to be the most familiar of its kind and it has a large following in spite of the fact that it was pulled off shelves for a time.

Pop Rocks are made to pop and crackle in your mouth through a unique manufacturing process. The 1980 patent includes the process of dissolving candy sugars in water that is then evaporated at 320 degrees Fahrenheit. The water content is then 3% by mass. The product is cooled to 280 degrees Fahrenheit and then stirred constantly while adding pressurized carbon dioxide at 730 pounds per square inch.

The mixture is cooled under pressure until it solidifies. The resulting candy looks like small rock candy crystals and it generates the popping and crackling that the candy is famous for when the candy is eaten.

Pop Rocks was rumored to cause your stomach to boil and explode if you ate it while drinking soda. This was due to an incorrect correlation between the ingredients in Pop Rocks and the common at-home science experiment where baking soda and vinegar combined with soda. The myth even was linked to a child actor, John Gilchrist, who was rumored to have died from combining Pop Rocks candy and soda in the same meal.

Seattle residents were so alarmed by this urban myth that the Food and Drug administration even set up a hotline in the city for those who were scared that their children might suffer harm from eating Pop Rocks and drinking soda. “Exploding Kid” rumors might have been part of why General Foods was so willing to pull the candy from shelves later on in its life. The company even had to release a letter to parents that stated that the candy was safe and did not contain enough gas to harm anyone who drank soda when they ate it.

This myth was tested on MythBusters by mixing Pop Rocks and soda in a pig’s belly. The belly did fill up with gas but it did not explode.

There were also other rather strange links between Pop Rocks and sexual acts when the candy returned to the scene after its licensing change. These seemed to vary depending upon who you spoke with and seemed never to be something that this person had tried, but the rumors persisted. Pop Rocks is a candy that is just different enough that it seems to have attracted all kinds of odd rumors and urban legends despite the best efforts of the candy’s producers to contest these ideas and stories.

Despite the many awkward stories and fears of exploding children over the years, there are many recipes that have been created to make Pop Rocks drinks, both alcoholic and non-alcoholic, and desserts and other baked goods which include the little popping candies. These vary in quality and success, but if you like to play around with fun baking and fun drink crafting processes, you might have fun trying these different cooking options out.

The candy is really best enjoyed when you simply eat it out of the bag and enjoy the popping experience and sensation in your mouth. There is really no need to get more creative with it than that and you will have a lot of fun enjoying this treat without having to try out or worry about all of its related urban myths. 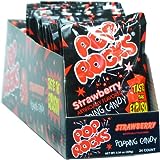 You can also buy Pop Rocks at Old Time Candy by clicking the image below.

Pop Rocks are sold in these flavors:

Pop Rocks also sells popping gum and you can get Pop Rocks dips that are lollipops with the same popping properties as the other candy styles. The candies are sold in multi-variety boxes and bags as well if you want to try all of the different flavors that this candy comes in.

The All-City Candy listing for the candy in Strawberry lists these ingredients:

The food coloring involved in some of the varieties can vary depending on the flavor. Most of the flavors are colored to look like what you would expect for green apple or blue raspberry candy and so on. This can lead to differing ingredients for the different colors. The basic ingredients are all the same, however.

The candy has always been sold in some version of a dark-colored little foil bag that has large and colorful lettering on it. The bags show cartoon stars and little drawn explosions as well as the name of the flavor and the note, “Taste the Explosion”. The lettering and images on the bags are color-coded for the different flavors, so strawberry is red, green apple is green, and so forth.

This design has not changed since the assumption of the candy by Zeta Espacial S.A. either. The recognition factor that goes with the style of the bags and boxes was likely well-worth continuing with the old appearance of the brand’s livery, despite the fact that the candy was sold. Since Kraft did not market the product for all that long either, they were likely not too worried about there being any change to the wrappers and boxes to prevent confusion with the days that they marketed the candy.

There are many candies that have changed a lot in appearance when purchased by another entity, but Pop Rocks have been marketed and sold in much the same way ever since they hit the market. At the end of the day, the candy eating experience that this treat offers, speaks for itself. You really don’t need to say too much or show too much about the candy on the boxes and bags to get the point across about what this candy can do when you eat it.

A 90’s ad for the Action Candy version of the product:

The secret behind that famous Pop Rocks candy “popping” sensation is pressurized carbon dioxide gas (CO2). Each of those tiny little candy pebbles contains a small amount of gas. When they burst free from their candy shells, these tiny gas bubbles make that irresistible popping sound.

How are Pop Rocks made?

To make Pop Rocks, the Kraft food company mixes up a batch of hard candy by heating up sugar, corn syrup, and flavor until it is a very hot liquid. Then they take the whole mixture and put it under pressure with carbon dioxide gas.

When did Pop Rocks come out?

“Carbonated Candy” was originally invented in 1956 by William A. Mitchell, a chemist at the General Foods company looking for a way to make instant carbonated soda by somehow trapping carbon dioxide into candy tablets.

What are Pop Rocks made of?

What are Pop Rocks?

Pop Rocks is a candy, owned by Zeta Espacial S.A.