Fruity and bite-sized candies are always really enjoyable. There are many candies that might fit this description, but none of them are as good as Smarties. These treats are chocolatey and fruity and crunchy all at once and they offer really delicious fruit shells that are not common in chocolate candies.

These candies have been around since the 1930s and they have not changed a lot since those days. These are classic candies that are still really popular just the way they always have been. If you love small chocolate treats with candy coating these are a great choice for you! You can grab handfuls of these little candies and pop them into your mouth with ease. These candies are really unique chocolate candy and their fruity flavor makes them really enjoyable when compared to simple candy shell chocolates.

This candy has been around since 1937 and they were originally made by H.I. Rowntree & Company in the UK. Today they are made by Nestle. These are chocolates with a candy coating in red, orange, yellow, green, blue, mauve, pink, and brown. Blue and white candies have been produced during some periods of the production of the candy but they are not usually sold in these colors.

This product is a lot like a candy that has been made in Moravia since 1907. The candy was originally called Lentiky in this area. They then renamed it Sfinx. This has always been a potential source of competition for Smarties but the companies have never had issues getting along and there have been no trademark claims made against the Smarties brand.

Rowntree’s of York in England has been making some form of candies they originally called “chocolate beans” since 1882. The original product was called Smarties Chocolate beans in 1937. The beans portion of the name was later removed due to trading standards that would not allow candies to be called beans.

Smarties in the UK have been traditionally sold in cardboard tubes. They usually have a plastic lid in a bright color on the tube with a letter of the alphabet on it. This was because the candy was originally linked to teaching the alphabet and encouraging young kids to learn their letters. Some of these original candy lids are now thought of as collector’s items.

Part of the design change was to include references to a game show called Blockbusters. This game show uses hexagonal tiles for part of the theme of the game. The packaging of this candy is now used to reference the game show and many tubes still feature letters or they might have a phrase on the outside and then the answer on the inside of the tube. These candies have always been linked with learning and quizzes in the UK and this is still the case even today.

The candies are no longer made in the UK and are instead made in Germany. The other large production location for the company is in Canada. Nestle obtained a trademark for the tube-shaped packaging of the product and then sued the company that produced M&Ms minis in similar tubes. This dispute ended up before the Supreme Court of Denmark where a trademark ruling was made that the shape of an item could not be a trademark all by itself.

Nestle announced in 2006 that they were going to remove all the artificial colorings from their candies and they decided to remove all the blue Smarties from circulation because there was no suitable natural replacement for the blue color they had been using. Blue Smarties came back in 2008 when a natural blue dye was discovered that would create an appealing blue color. The blue color was then removed again when there was an incorrect link with hyperactivity in children.

The blue color has been introduced again in 2010. Red smarties were also given a makeover to change the way they are dyed. They are now dyed with red cabbage.

Blue Smarties were originally made to protest the sale of Rowntree to Nestle. The slogan that went with this color was, “I support Blue Smarties”. This slogan was also printed on buttons that were handed out to protest the sale. The blue color of this candy has been fraught with lots of difficulties and controversy for years. 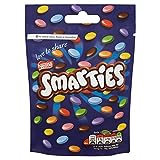 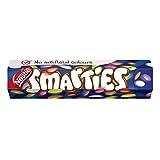 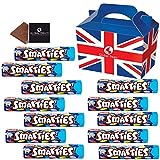 From the Sainsbury’s listing:

In the UK, this candy is also sold in the form of eggs and chocolate bars. There are also ice cream variations that are made with Smarties in them. These are called Smarties Fusion. These candies are also used for McFlurries at McDonald’s in some locations. Canadian Dairy Queen locations offered a Smarties ice cream treat until 2015 until it was replaced with an M&M version in 2018.

Giant Smarties were introduced in 1997 and then in 2004, a Fruity Smartie was made. There have also been white and milk chocolate versions of the candy sold. The white chocolate candies were sold as Smartic Frost Bites but then they were renamed White Chocolate Smarties. In 1998 a version of the candy was made called Smarties Secrets. These candies were made with various designs and flavors in each bag. These candies were also sold with a comic book in each package. These are no longer on the market.

In Canada, there were some versions of the candy made with red and white color only and Canadian leaves on the white candies. There are also Halloween versions of the candies that are sold under the name, Scaries. Christmas and Valentine’s versions exist as well and there was a short-lived Peanut Butter variant as well.

In the US, there was a version of the candy called Tarzan Treats in 1999. These were linked with the Disney movie and they were made in select colors. The yellow pieces were printed with outlines of the characters that were featured in the film.

In Canada and some of the other locations where this candy is sold, they are still sold in round containers and they might also be sold in rectangular boxes. Giant tubes are used in some locations and you can get these candies in bags in Australia and New Zealand. Each market sells this product with its own twist essentially. This can make for some confusion about if these are the same candies or not but the only difference is the packaging. The same candies are inside each container.

Smarties is advertised with different slogans in different places. In the UK, they have used slogans like, “Only Smarties Have the Answer” and “Do You Eat the Red Ones last?”. There have also been slogans like, “Buy Some for LuLu” to advertise a singer named LuLu who was the daughter of the maker of the ad. They also made a song called, “A Handful of Smarties” which was used in Europe as a whole and Jamaica and the Caribbean.

Canada used slogans like, “Do you suck them very slowly, or crunch them very fast?” and also, “Show Your Colors!”. The “Do you eat the red ones last?” slogan is common here too. In Germany, they are advertised under the slogan, “lots and lots of colorful Smarties”.

In South Africa, they are advertised under the slogan, “Wot a lot I got”. They usually run this all together into one word. It will appear like this, “Wotalotigot”. In Slovakia, they advertise this candy under the slogan, “Colorful world in the palm of your hand”.

These candies were one of the first candies that were marketed with computer-generated imagery which was not common in the 80s yet. There have always been clever and cute ads that were produced for this candy and many of the most famous ads involve adventurous things happening when Smarties are consumed.

How many calories in Smarties?

There are 2 calories in one piece of Smarties.

What are Smarties made of?

When were Smarties Invented?

Smarties have been around since 1937 and they were originally made by H.I. Rowntree & Company in the UK. Today they are made by Nestle.

Smarties are made by Nestle.

How many carbs in Smarties?

There are 6 grams of carbohydrates in every piece of Smartie.