Sno-Caps are small chocolates that are in the shape of a dome or “cap”. They are dark in color but are covered in white sprinkles. Sno-Caps taste like chocolate with sprinkles on them and are slightly bitter tasting. Sno-Caps were first invented in the year 1927. The box that Sno-Caps are sold in is brown and white and has writing on them that says that Sno-Caps are semi-sweet. You can read more information about Sno-Caps on this page.

n 1927, Sno-Caps candy came into existence for the very first time. It was introduced as small pieces of semi-sweet chocolate sprinkled with white snowy nonpareils. The now Nestle company trademarked Sno-Caps was actually invented under the Blumenthal Chocolate Company.

The founder’s parents of this company entered the United States from Bavaria Germany in 1849. Joseph Blumenthal founded the Peerless Extract Company in 1895 and officially became a business called the Blumenthal brothers extract Company in 1900. By 1909, the cocoa sale and powder production began. One year later the Blumenthal Bros manufactured both chocolate and cocoa in Bridesburg, Philadelphia.

The first version of this candy was actually a single large nonpareil that was about 2 and ½ inches around. This single sale product was not that marketable as this was already a candy style that was falling out of favor with the rise of the candy bar. Companies were wanting to make products that were portable and that could be eaten on the go. The rise of the fast-food reality was not far behind and single candies that were larger in size were almost immediately wiped off the market by these changes in the food and candy industry.

This was a candy that was also unusual even in its day, for being made with semi-sweet chocolate. It makes the candy a great choice even today, for those who do not appreciate a really sweet dessert and prefer a more cocoa-toned chocolate experience. There are many people who are not totally sold on this kind of chocolate, but the popularity of a slightly less sugary dessert has increased in recent years as candies and cereals have been forced to be made with less sugar for improved health.

The candy was reduced to the size that is more familiar today in the late 1920’s and the wafers were covered with small sugar pellets. These were later converted to the sprinkle-like model that is more common today for all versions of this kind of candy that are on the market. The sugar variety was not used for too long before the popularity of adding sprinkles to all kinds of candies and also to ice cream took hold. It’s hard to imagine this classic candy without the sprinkles that it has been sold with for many generations, but candies that bore this now-familiar additional flavor benefit were not common until the later 1920s and 30s.

It might seem odd to some people to consider this bite-sized candy a theater snack, but for many years, this was a classic theater offering. In some locations, this is still a standard movie theater offering. This was one of the first candies to be sold in a box that was easy to hand over the counter and that could be carried to a movie seat and accessed with ease.

The solution to the small candy portability problem had been neatly resolved by the creation of the smaller and narrower cardboard boxes that are so familiar for other bite-sized candies even today. This is not a common theater treat these days, but once upon a time, Sno-Cap candies and popcorn did side-by-side duties at the theater.

The company’s best-known candies that were introduced in the 1920s are the Goobers (1925), and Raisinets (1926), and eventually the Sno-caps (1927). As sales grew further, they even expanded their company by purchasing additional real estate in 1948. They began producing holiday candy in 1951 and issued public bonds for investors beginning in 1958.

Even with this success, the company faced some financial and legal issues that resulted in the eventual end of the Blumenthal company. One such example is an employee who sued the company in the Supreme Court of Pennsylvania in 1968, claiming extreme dust and heat conditions in the workplace. By 1969 Ward Chocolate Company acquired Blumenthal company and the Blumenthal family was no longer in control.

When Ward chocolate was under the control of the company that produced these candy brands, they faced some serious legal issues. In 1974, the company began secretly manufacturing products outside of the U.S and kept about $5 million from being disclosed in income. The over-turn of the company and its candy products went through quite the windmill of company ownership.

Again in 1981, the brand was later purchased by the Chicago-based Terson Company. Later on, the Nestle company acquired the brand in 1984 from the Terson Company and received the rights to market the brand and ensure its legacy for the candy would still live on. Nestle has acquired many brands since the nineteenth century. Nestle’ is a Swiss global food company with around 2,000 different brands. In 2018 the brand was purchased by Ferrara Candy Company.

In 2015 it was made available to the public sphere that a trademark for the candy, Sno-caps candy, a candy produced by the USA Nestle company was filed. This trademark ensured the Sno-caps candy name and production were protected by the trademark under the full extent of the law.

Nonpareils are named this way because they were originally so special in the confectionary world that they were rumored to be without equal. This is what the phrase means and the French name for the candy treat has followed the candy ever since it was first made. While there are various brand names that have been associated with this kind of candy, the nonpareils is still the category for this kind of candy design and taste profile. The basis for this classic treat is a confectionary item that is quite old and has been made since the late 1800s.

Early cookbooks stated that a proper cake required these little decorations to be complete and the comfit-making process was laid out to create them for wedding cakes and more. Nonpareils were not being created as a stand-alone item at the time, but in the latter half of the 1800s, there are indications that they had started to be sold all alone without the need for a cake. The addition of other flavorings like sugars and toppings happened at this time as well, and the drop-like candy was so easy to pour out and decorate before it was set that this became a logical addition to the offerings at candy shops in many places around the world.

It might seem confusing to lovers of classic candies that Sno-Caps are classified as nonpareils. The traditional candy is a bit different in size and overall presentation, which can lead to some confusion. The classic version of this treat comes in a much larger size and is not always made with sprinkles of sugar on top.

This being said, the original candy is made in much the same way as Sno-Caps. The candies are made with sugar and starch and are poured into little droplets that dry and set up. These candies have their base in the use of sugar to mask the taste of medicines and the original nonpareils was actually a comfit, which was used for the delivery of medicines. This drop-like shape, no matter what diameter, is fairly unique to comfits and nonpareils of all kinds.

These little candies were originally used to decorate cakes and to add flourish to other confectionary items. They were not eaten as stand-alone items until the 1800s. The history of the nonpareil is complex in the US, where they were replaced as decoration items almost entirely by sprinkles. The nonpareil is still more familiar in the UK and Australia, as well as in France and other parts of Europe. American confectionery design does not always include these kinds of items, which makes Sno-Cap candies a bit unique for more than one reason.

In the Netherlands, there are versions of this candy treat that are made to be eaten as breakfast with bread and butter. These candies do not taste quite the same and are covered with anise seeds, giving the candy a more licorice flavor profile. In the UK and Australia as well as New Zealand, nonpareils are used as toppings on patty cakes, on buttered bread for fairy toast, and can even be part of the treat or goody bags that are handed out for children’s parties or birthday celebrations. 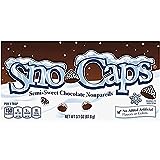 You can also buy Sno-Caps at Old Time Candy by clicking the image below.

While the candy is sold exclusively under the name of Sno-Caps and with only one flavor variety and version in the US, the candy is marketed a bit differently in other countries. There is almost always a divergence in the names of sweets between the US and other countries, and this candy is no exception to that rule.

While not a Sno-Cap variety, there is a version of the traditional candy that is sold under the name, “Hundreds and Thousands”. This candy is sometimes incorrectly mistaken for Sno-Caps and the versions of Sno-Caps that are sold alongside it can be referred to by this other candy name incorrectly in some cases.

The Company That Owns Sno-Caps Candy

The Year Sno-Caps Was Invented

Sno-Caps were invented in the year 1927 by the Blumenthal Chocolate Company.

Here are the ingredients of Sno-Caps.

This is an interesting candy from the perspective of the wrapper and containers that have been used to market it throughout its lifespan. Classic nonpareils are made by being dropped onto strips of wax-covered paper. The treats are allowed to cool on the wax paper and then are removed from it to be sold in wrappers or they might be layered in boxes. This is a great fit for the larger version of this treat but worked poorly for the candy-bar reality that Sno Caps were trying to compete in.

This meant that these candies had to be made to fit inside a box and they needed to be designed so that they would not melt readily and become a solid clump at the bottom of the box. This is likely the reason that the recipe has not been changed at all in current branding efforts. Semi-sweet chocolates do not melt as easily as milk chocolate.

The box that is used today does not look much different than the ones that were used when the candy was first sold. The traditional brown background with white lettering was used almost from the beginning and the boxes were sold with a plain brown background or they might have shown the candies themselves behind the logo.

This is a classic Hershey’s company design that seems to have dropped right into place at Nestle when the candy was acquired. The brand sells many other classic candies that they continue to market with old-fashioned boxes and marketing materials. This is one of those candies that you could buy today and your grandparents would recognize the packaging immediately.

There is something charming about the simplicity of the Sno-Caps branding efforts and the brand is in good company with other products that have not changed much over the years. The Junior Mints, Hershey’s Bars, and other classic candies in the same category have kept their traditional look as well.

Here is a taste review for you to watch! You can see the packaging as well and the size and texture of the candies as they are removed from the box.