Sugar Daddy candy has been really popular for many years. This is a simple candy that you can enjoy no matter what age you are, and this simple little sweet has been a big hit for many generations.

If you want to enjoy a sugary treat, this is always a great choice. You can’t go wrong with a Sugar Daddy candy treat! There was once even a Sugar Mama candy which meant that the Sugar Daddy candy was part of a full family of candies! It was even suggested heavily in ads that Sugar Babies were the result of a marriage between the two “adult” bars.

Sugar Daddy candy occupies a very special place in the hearts of those that love it. There is no shortage of good things to say about this candy and being able to enjoy a caramel treat with ease is rare these days. Sugar Daddy candy is a classic candy that most people will never stop loving!

Sugar Daddy candy is a simple candy that is a block of caramel on a stick. The James O Welch company that first made the Sugar Daddy candy was bought out by Nabisco in 1963. The Welch companies were then sold to Warner-Lambert, and then Tootsie Roll bought them in 1993. All of this switching around early on could have made Sugar Daddy candies fall off the map, but Tootsie Roll knows how to market something like this candy with ease. Their entire lineup of candies is basic and a bit tame but beloved all the same. After all, it doesn’t get any simpler than a Tootsie Roll!

Nowadays, this candy is made in two sizes. There is a Junior Pop which is 53 kcal, and a Large Pop which is 200 kcal. There are also some special candies that are sold on Valentine’s Day and at Christmas. There are also giant-size bars that are 964 kcal and even a one-pound bar that comes in at 1928 kcal! Most people are only aware of the classic “Large Pop” size as it is the most commonly sold. Many people are not even aware that there are Sugar Babies candy on the market either!

This candy was first sold under the name Papa Sucker by Robert Welch in 1925. This was a new caramel sucker, and the reason for the name was that the large sucker was supposed to be the Papa of the family. When Sugar Daddy became a popular slang term, the name was changed. In 1976, there were ads that listed Sugar Daddy alongside Sugar Mama. This was a female version of the bar that was sold in 1965. Sugar Baby came onto the scene in 1935. Sugar Mamas were discontinued in the 80s. Sugar Babies are still sold today.

One of the original ads for Sugar Daddy candy was connected with the Bobby Riggs tennis match. These Sugar Daddies were quite large and were sold at one pound apiece. This was part of the tennis match that was named “Battle of the Sexes.” This took place in 1973, and it was the first time that this candy had been discussed and advertised in such a public way.

This ad campaign and the efforts to make a full family of these sugar candies made these little caramels really popular. This was the first time that a candy this simple had been popular in a long time. The fact that so many candies and popular culture references were using this term made the new name of the candies topical.

Fleetwood Mac, the Jackson 5, and the Bellamy Brothers all referenced this term in songs. This sort of connection made the candy a well-known one with ease. This was also technically the largest lollipop of its time, which made it popular for an entirely different reason. This connection with pop culture and the increasing size of candy bars made Sugar Daddy candy a standard choice for kids of all ages. The fact that it did not melt in the summer was also a big help to kids going on adventures and wanting to bring their candy bars with them to school in their lunchboxes.

This candy is still made in much the same way as it was in the beginning. The candy is hard enough to suck on like a lollipop, but it does get soft, and you can chew on it readily as well. This is part of what makes this lollipop really unique. You will not be able to chew on many other lollipops like this, and you will want to try this candy out if that interests you!

These little offshoots of the Sugar Daddy candy family are still sold today. These little Jelly Bean sized candies are still caramels, and they taste a lot like full-size lollipops. If you love Jelly Beans, but you also love caramel, these are the right candies for you.

These little candies were sold for the first time in 1935. When the various sales of this candy family took place, Sugar Babies survived, and Sugar Mamma bars did not. Some people still swear by Sugar Babies compared to the lollipops. The Welch family launched many amazing candies that are still around today. Sugar Babies and Sugar Daddy are among these candies. 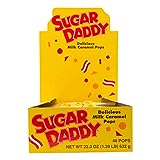 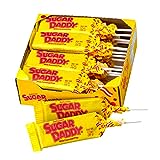 You can also buy Sugar Daddy Candy at Old Time Candy by clicking the image below.

This is a very simple candy when compared to complex candy bars that have many layers.

The allergy warnings for this candy are milk and soy ingredients. There is also a warning for US bioengineered foods.

This is such a simple candy. It has almost always been advertised in the same way. The wrappers are wax wrappers, and they are twisted around the stick. The logo is red and is made with bubble letters that almost have a circus feel to them. The simple yellow wrappers are almost see-through, and they are quite easy to remove from the candies.

The wrappers also have a small confetti-like decoration at the bottom of the wrappers. Otherwise, the wrapper is very simple, and you will barely even notice the information that is on the candy. This is also a candy that is not the prettiest when you unwrap it. It is just a caramel brick with some ragged edges when the wrapper is removed.

These candies were marketed to kids, but they have been just as popular with adults. You will find that everyone of all ages loves these candies, and this has continued to be the case today. The reason for the demise of Sugar Mama is not clear. It is possible that the family aspect of the candies did not sell as a marketing plan.

The fact that the lollipops were essentially the same with different names and slightly different ingredients might have been the reason as well. The Sugar Mama was covered in chocolate, but the center of the chocolate was the same as the Sugar Daddy candy. This was also probably just not as popular a flavor combination since there were so many other candy bars that offered the same kind of combination at this time.

Caramel candies have not remained as popular as they once were. Sugar Daddies and a few classic candies have stood the test of time. Sugar Mamas were probably too much like a boring candy bar once there were things like Snickers Bars on the shelves of the supermarket and at the theater.

Many people are not that invested in simple candies anymore. There are so many complex and really intriguing candies out there that you would have to struggle to find something as simple as the Sugar Mama for sale. Having all these other, more variable options probably made sales on the Sugar Mama fall out of favor. Many people are not even aware that this candy even existed and it was clearly much overshadowed by the Sugar Babies and the Sugar Daddy candy.

A much older ad:

A sugar babies and daddies ad: