Chocolate is chocolate, right? But some chocolate bars just really know how to do it right. You see, it’s not just chocolate that makes a candy bar great. It’s the entire package. Violet Crumble certainly knew what they were doing when they created their delicious candy bar.

Despite a long and sometimes challenging history, Violet Crumble has been around for more than 100 years. Keep reading to learn more about this chocolate delight.

Violet Crumble is an Australian candy bar. This delicious bar is made with honeycomb toffee and then coated and covered and chocolate. The candy bar was first produced in 1913. The initial producer was Hoadley’s Chocolates. This company was located in Melbourne, Australia.

While it’s no longer with the original owner, it is still owned and produced in Australia. It has changed ownership more than once over the years. The current owner is Robern Menz. This company is located in Adelaide, Australia.

Violet Crumble is definitely unique. As far as texture, you can probably compare it to the Butterfinger. We share this so that you understand their slogan. From the beginning, the slogan was “It’s the way it shatters that matters.” To this day, this remains the slogan and you will often see it on packaging or advertisement for the candy bar.

At one time they also used the slogan “Nothing else matters” but it just didn’t seem to have the same effect. While we compared the texture above to a Butterfinger, many fans have also compared the candy bar to options like the Crunchie bar, which is a bar made by Cadbury in Britain.

While this candy bar is made in Australia, it can be found in other markets. Hawaii and California are both popular US states that carry the candy in certain stores. It’s also quite popular in Hong Kong.

When we look at the history behind the creation of Velvet Crumble, we see the rise of new beginnings and changes throughout the years. Hoadley and Company was originally owned by Abel Hoadley. That company was actually a jam factory in Melbourne. It began operations in 1889. As Abel’s business grew he made jams, jellies, preserves, sauces, candied peels, and confectionery.

As his business continued to grow and expand, he chose to sell off the jam business and in turn created Hoadley’s Chocolates. That was 1913. Violet Crumble was among the first products made under the Hoadley’s Chocolates business, which makes it even more impressive that you can find this candy bar today.

The candy we know as Violet Crumble actually started out as small honeycomb candy pieces that were part of an assorted candy package. That honeycomb piece was one of the most popular choices in the box. Since it was so popular, they made the honeycomb candy into an actual candy bar.

At that time, it wasn’t coated in chocolate. They found a unique problem with the honeycomb at this time. The pieces would stick together badly. His solution to that problem was to dip a bar in chocolate. This gave you a crunchy inside with chocolate coating and they got rid of the sticking issue.

All of this happened in 1913 and the resulting product was Violet Crumble, which was a huge hit.

In 1970, an English company named Rowntree acquired Hoadley’s Chocolates. At this time, production was moved to Adelaide, Australia. In 1988, Nestle acquired Rowntree and took ownership of Violet Crumble, as well as several other candies.

Nestle held ownership until 2018. In 2018, Robern Menz purchased Violet Crumble from Nestle. That company was able to acquire the rights, equipment, and production capabilities. For 9 very long years to fans, Violet Crumble was not available for purchase. At one time in there, a descendant of Abel Hoadley’s had tried to acquire the brand and was not successful.

Finally, Robern Menz did acquire Violet Crumble and they instantly started production. The candy bar found its way back to stores early in 2019 after the 9-year pause. Fans of this candy could not have been happier. 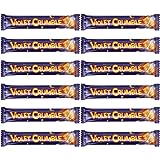 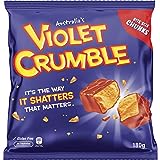 When Was Violet Crumble Invented?

Violet Crumble initially was invented in 1913. It has a unique story. The original design of this candy bar was actually just honeycomb candy pieces. When the candy was first designed, it was placed into a box of assorted candies.

These candies were some of the first produced by Hoadley’s Chocolates when it was formed in 1913. The honeycomb candy was a big hit from the beginning. This led the owners to start selling the candy by itself.

However, as they tried to sell it as a candy bar by itself, they quickly found some issues with it sticking together and not turning out the way they really wanted it to. That’s where the chocolate coating comes in.

They added a layer of chocolate on the outside of the bar and that’s the rest of the story. The candy bar has stayed the same primarily since that time and more than 100 years later, you can find the candy bar in many areas for purchase.

Violet Crumble is now owned by Robern Menz. This is located in Adelaide, Australia. The original owners and creators were Hoadley’s Chocolates, which was owned by Abel Hoadley. Abel actually started his business ownership with a company that made jams.

He eventually sold the jams off and created Hoadley’s Chocolates. Violet Crumble was one of the first candy bars sold from the brand that wasn’t part of the assorted box of candies they originally started with.

Violet Crumble did undergo a brief ownership by Nestle. Nestle changed the formula and the look and it didn’t go over well. They discontinued the project and it was not available for 9 years before Robern Menz saved the day for Violet Crumble and all of its fans.

How Did Violet Crumble Get its Name?

The stories behind the naming convention on this candy is pretty fun.

Abel Hoadley’s wife loved the color purple, particularly the violet shade. The very basis of Violet Crumble began in an assorted box of candies. That assortment placed the candies in a purple box.

They decorated the box with violets. You see, Abel’s wife was fond of violets and the color purple. He chose the design as a tribute to her. When the honeycomb candy that is behind Violet Crumble was turned into a candy bar, he kept the theme going.

You see, he actually was going to name this bar Crumble. He quickly found that this could lead to trademark problems. With that, he decided to make the name Violet Crumble. He used purple packaging and added a violet to the package design as well.

And that’s where Violet Crumble grew from.

Violet Crumble has a lot of history behind it. You expect that from a candy bar that has been around for more than 100 years, right? Despite some challenges over time, they’ve come out on top.

After a 9-year stint of being unavailable, 2019 brought Violet Crumble back to its original glory and it is still going strong.