Wise Foods is based in Berwick, PA. They sell across the US and they make all kinds of products because of their famous popcorn. The company was originally created to sell their world-famous Wise Potato Chips, but they later expanded to make Cheez Doodles, tortilla chips, pork rinds, and popcorn.

Earl Wise founded Wise Potato Chip Company in 1921. He owned Wise Delicatessen and he had found that he was not using up all of the potatoes that he bought in a day for the restaurant. His mother and he decided to make potato chips with the leftover potatoes and they were an instant hit!

With the success of the chips, Wise decided that he needed to figure out a better way to market the chips. At the time, the bags that chips were sold in were just brown paper and they would get greasy and saggy looking overtime when they were on the shelf. Wise created the corporate logo for his snack company and started selling the chips in waxed paper bags that did not deteriorate over time.

The first delivery truck was purchased by Wise in 1922, and the first production plant to make chips on a larger scale was opened in 1925. This was the backbone of the production engine for years until the company eventually passed out of the Wise Family’s hands in the early 1960s.

In 1964 the company was sold to the Borden Condensed Milk Co. This is when popcorn came into the picture along with the Cheez Doodles and other snacks. The popcorn varieties that were offered at this time were unique and there were more than just traditional butter-flavored varieties offered by the company.

At one point the company sold Cheez waffles, but these have since been discontinued. In more recent years, kettle-cooked and reduced-fat varieties have been added. There have also been additions to the unique and limited run flavors that come and go seasonally or based on other marketing planning.

Wise popcorn became known for being fluffy and soft and just the right amount crunchy. They added additional flavors to their lineup and the company prospered until 1994 when a proposed sale to Pittsburgh Food & Beverage Company fell through due to fraudulent behavior on the part of the buying company.

The Wise company in its original form failed due to this botched sale, and in October of 2000, the company was purchased by Palladium Equity Partners LLC for $96 million. This company associated Wise products with Frito-Lay, which led to new packaging as well as a change to the varieties that were offered.

As of 2012, the company has been purchased by Mexican company Arca Continental which is the second-largest Coca-Cola bottler in Latin America. The company continues to sell the varieties of Wise popcorn that people know and love.

Currently, the company states that it sells 50 million bags of snacks per month. 23 million of these bags are potato chips annually. The company is proud of the fact that some of its employees have been working for the company for as many as five decades.

This is truly a quality business that stands for the right kind of care related to their production process as well as the creation of new snacks as needed.

The same classic flavors that made Wise popcorn offered from the beginning are still available today.

These flavors have always been bestsellers for the company and they have stood by these standard varieties for years.

There have been short runs of other flavors like Cinnabon popcorn. These are usually seasonal or are offered for short periods of time. 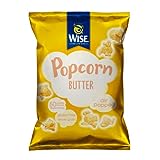 The simple designs of the bags of Wise popcorn have always been simple. Even from the years of the waxed paper bags, the Wise logo and little else have been present on the bags. The current packaging is simple and each bag is made with a simple colorized background. Some popped popcorn kernels are on the front of each bag in the right color for the variety in question.

The name of the variety of popcorn is listed on the front of the bag along with statements about the popcorn being air-popped and some facts and information about the popcorn inside the bag. The Wise logo hovers at the top of the bags near the seam that closes the bag.

The ingredients listed here are from the Wise Popcorn Butter flavor. The flavoring ingredients will vary based on the variety of popcorn that you have selected.

Some varieties will include milk ingredients. All varieties are to be stored in cool and dry locations away from light.

There are 150 calories in each serving and the popcorn is always air popped. Some varieties are gluten-free as well and there is never MSG in any of the varieties.

What Other Snacks Does Wise Sell?

They also sell a green onion dip mix in some locations. Dipsy Doodles are wavy corn chips that are made for dipping and the Cheez Doodles are like other cheese puffs, only better. Their kettle-cooked varieties are light and crunch easily, making them very enjoyable despite their lower-fat status.

Where can I Buy Wise popcorn?

Wise is sold at many major retail locations like Walmart, gas stations, and also through Amazon. You can get Wise products almost anywhere in the US. You can get bags of varying sizes on their website as well.

Not every outlet will sell the unique flavors that are sold in limited quantities and you might not be able to get all varieties through online sales options. You may find that being on the west side of the US will limit your access to some of the varieties as well.

There are 15 states that distribute these snacks including:

These are the most common places to find these snacks readily in the grocery store or on the shelves in a gas station. However, with the ability to buy products online, you can find these chips and popcorn snacks that are not that hard to gain access to no matter where you live.

The original marketing campaign for Wise popcorn had no mascot, but by 1964, they had included their mascot, Peppy. Peppy was an owl and he was featured on all of the packaging materials from 1964 until the early 2000s in some areas.

Peppy was the result of a rebranding effort that took place after the 1944 fire that burned down the original production plant at Wise headquarters. The owl was intended to honor Wise’s mother, whose “wise” guidance had helped him turn leftover potatoes into chips that had created an empire.

The merger with Frito-Lay in the 2000s led to the removal of Peppy but the brand made the effort to keep him there in spirit as a tribute to the original spirit of the company. The current logo displays the wise eye of an owl looking out of each package of popcorn or other snacks.

There have been various methods of advertising Wise snacks over the years. The company has always been associated with yummy finger foods and they have capitalized on the variety of different products that they sell as part of their advertising campaigns.

Here is a video about how they make Wise Popcorn:

A history of the company: