Nestle has always been known for their really delicious candy bars, and the Yorkie Bar is one of the classic bars that the company has made for years. Originally intended to compete with the Cadbury Dairy Milk Bar, this product has carved out its own fan following over the years. This candy bar has also had a really interesting past, being marketed almost exclusively at men in the early years of its life.

There are few candy bars that have been made in the UK that offer such a masculine advertising presence or that have been made in this unique style. This was almost an American-style candy bar that was made and sold in the UK. Marketed at working men and marketed entirely against women clientele, this unique candy bar carved a name out for itself in the UK candy market due mostly to its unique marketing presentation.

The Yorkie Bar is a simple candy item. It is simply five chunks of solid chocolate wrapped in a fairly nondescript wrapper. There are limited varieties of this product to enjoy, and there are no colorful additives or anything remarkable about this candy itself other than the “chunky” nature of the candy bar itself.

The Yorkie Bar was first conceived of by Eric Nicoli of Rowntree’s in 1976. He noticed that there were no “manly” candy bars on the market, and he wondered if this market gap could be filled by Rowntree’s. Yorkie Bars were made at the York and Norwich plant from 1976 until 1994, and they were marketed from the start almost exclusively towards men. There were some early ideas for marketing and for the name of the candy bar that was not targeted at solely male clientele as well, but it is likely that the supposed niche market for men’s only candy was too attractive a marketing ploy to be ignored by Nicoli.

The Yorkie Bar was apparently almost named the Boulevard Bar, which seems highly incongruent with the later macho and overly blunt marketing campaigns that were to follow once the new name had been chosen. The original marketing design for the Boulevard Bar looks a bit like cigarette ads and was intended to convey a cosmopolitan and wealthy group of sophisticated customers enjoying this candy bar. The “continental glamour” of French culture would have been the focal point in this version of the brand’s advertising. Other names like Chocolate Country, Pick-Me-Up, and Variety Port & Nut were also rejected as too much like other candy bar branding options that other companies were utilizing.

The Yorkie Bar name was chosen, and then the bar was advertised as rough, tough, and fit only for eating by men. While the real goal of the bar’s creation was to outcompete the Cadbury Dairy Milk Bar, the highly masculine advertising campaigns probably got in the way of this goal. Some of the ads for this candy bar in the early years used slogans like, “Welcome to York,” with depictions of strong men eating the Yorkie Bar. The addendum slogan would read, “Where the men are hunky and the chocolate’s chunky”. The supposed “chunkiness” of this candy bar was another area of focus that has carried through until today.

More recent ad campaigns for the candy said things like, “It’s not for girls!” and there were even more sexist slogans that were utilized until complaints came to light. There was even an investigation by the ASA into the claims that the candy bar was sexist and the ads should not be allowed to be displayed with these messages. There were efforts to hand out the bars only to men at sporting events that were halted, but a campaign was run until 2011 with bars wrapped in pink livery alongside the slogan, “It’s not for girls!” The candy bars that were involved in this advertising were converted at this time to be Yorkie Bars sold in 3 packs.

The mascot of the candy bar during this period was the rugged and tough, “Yorkie Bar trucker,” who was used for advertising of various kinds. The clear connection between manly toughness and the Yorkie Bar was a unique take on candy advertising and might have had something to do with the success of the brand. However, chauvinism in advertising has waned significantly over the years, and this connection to a men’s only candy bar has been cut back some in more recent years.

The original ads offered a sexist take on the macho behavior and manliness of truckers and men who worked with their hands. One of the mainstays of these ad campaigns was that the Yorkie Bar was meant to fuel hard work. There were many candy bars that were advertised as meal replacements during the 70s, and this was probably part of why the Yorkie Bar was promoted in the early days as fuel for a long working day. This misconception was not debunked until the late 90s, but candy bar companies and other food manufacturers were discouraged from indicating that their products could replace meals by the late 80s.

When the requirements for food safety and nutrition were updated in the early 2000s, pressure was placed on makers of these kinds of candy bars to stop encouraging their use as meal replacements. This was also a time when the size of candy bars was scrutinized, particularly in Europe. Many large candy bars were reduced in size to help meet the new standards for health, and most of the candy bars, like Yorkie Bars that were advertised as larger and hearty candy bars, were forced to change their marketing and their creation processes.

The size of the Yorkie bar has changed over the years, but the shape of the bar is still the same. The six chocolate chunks are still present, but they have been reduced from 70g to 55g. The push for healthier eating and healthier candy products in the UK has greatly reduced the size of most candy bars sold in this market. Some of the bars were recently even shrunk down to 46g to be in keeping with new guidelines for healthful eating. Yorkie King Bars were also reduced greatly in size but were not pulled from the market.

The company has had to relinquish the “chunky” descriptor for the candy bars due to these changes in size, but this has not directly impacted sales since all candy bars have been required to make the same accommodations. Many other countries have joined the UK in this healthy eating initiative, while the US has made half-hearted accommodations that have not been met with much approval by the public.

When the Ministry of Defence started adding Yorkie Bars to the ration packs that soldiers were sent overseas with, the slogan that was printed on these bars was, “it’s not for civvies”. This is a special version of the candy bar that is not sold in any market and is reserved solely for use by the military in the UK. This is a similar product to the Hershey Bars that were made specifically for use during WWII, and there are various other American candy bars that had military use variations that are slightly different than the versions that are sold to the public. 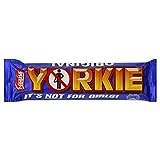 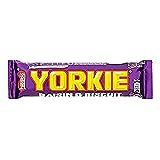 The ingredients of the current regular size Yorkie Bar:

This is not an allergy-friendly candy bar as there is wheat, milk, and other allergens in the mixture. There are no artificial colors and flavors or preservatives, which is one of the benefits of candy bars that are made entirely for sale in the UK. Most products that come from entirely European markets are made to be free of preservatives and other potentially harmful chemicals in keeping with European food standards.

Another ad about women pretending to be men to get Yorkie Bars: