It is no secret that there are many soda companies making products that might be similar to one another when it comes down to it. There are also some really unique soda brands that really are different from other products that are sold in this market. Big Red Soda is a unique soda product that is most popular in Texas and the southern United States. This cream soda product is really different from other sodas on the market today, and if you love classic soda fountain-style drinks, you will love this soda.

This soda is distributed by a variety of different bottling companies, but it is owned by Big Red Inc. The new version of the soda is a slight departure from the original product that was rebranded in 2007. If you are not located in Texas or one of the states where this soda is on shelves, companies that allow ordering online will let you give this soda a try.

The original soda product was developed in 1937 by a chemist named Grover C Thomsen. This product was a bit different than any of the versions that came after it and was only marketed to a very local group of sellers in the Waco area. This product was sold not long after it was first created, which made it possible for wider distribution and some changes to the formula to make it a bit more mainstream. The original fruity and sweet pairings were present in the very first recipe, but they were refined to make them more recognizable when the first version of Big Red was sold.

The original soda product that turned into Big Red was called Sun Tang Red Cream Soda. This was quite a mouthful to say, and it is no wonder that the rebranding of the soda shortened this significantly. The company states that this product was the, “original red cream soda”.

There are not many products in the cream soda variety that are this color, and you would probably not even know that this is a cream soda just by looking at the product. The bright red color seems more in line with a fruity drink or a colorful cola product than a cream soda. However, this is definitely not a flavored cola drink or a fruity punch product, and you will be able to tell from your first sip that you are drinking a unique cream soda product.

Big Red uses a unique flavor profile that is different from many other cream sodas on the market. Many people state that it tastes like bubblegum. The flavor is made by combining lemon and orange oils as well as pure vanilla.  The unique flavor profile and color are a big part of what makes this product stand out from the crowd of sodas, and the slightly less sugary nature of this product is also a big hit with people who are not fans of really sweet sodas.

Texans will insist quite staunchly that this is not a bubble gum-flavored product, and you will find people that are willing to argue with you quite vocally about this. There is a difference in the flavor profile compared to what more people think of as a cream soda, however. This is still a much fruitier version of the cream soda profile, and there is probably nothing else quite like it on the market today. Since dark colas are the most popular sodas on the market today, many people think of most soda offerings through this lens. Big Red soda straddles the line and offers a fruity and sweet note to a classic cream flavor profile.

The Big Red Soda brand and marketing of this product came about in 2007, but the original product was first made in 1959. The name was changed to Big Red in 1969 when Harold Jansing took over the brand and was making it at his San Antonio bottling plant. The name change came from a name that Jansing heard a golf caddy call the soda. The current bottling style and marketing plan have changed quite a bit since the acquisition of the brand in 2007, but the name change was much catchier than the original name of the product for sure.

Big Red Soda was marketed in central and southern Texas to begin with after the name change. The marketing area spread out to Louisville, KY, and then Southern Indiana, but the soda was not sold outside of these markets. The Louisville market was accessed due to a connection with the R.C. Bottling Company in this city. Louisville’s then mayor, Greg Fischer, even created “Big Red Day” on May 16th due to the popularity of the soda. This date commemorated the date of the first sales in Louisville.

When Gary Smith bought Big Red ltd in 2007, he was backed by powerful capital investment companies that made it possible to work with major bottling companies. The product is now bottled by Keurig Dr. Pepper, CCE, and the Pepsi Bottling Company. There are some other independent bottlers that also have rights to bottle the product and sell it.

In the early 2000s, before major bottling companies were involved in the manufacturing process of this soda, it was already in the top ten for soda sales in the US. Being able to access improved bottling and distribution methods has made the product even more visible and successful. Today it is considered the most popular crème soda in many markets, and the rebranding that has made the bottles more interesting and noticeable has helped to attract new buyers to this product.

The main headquarters of Big Red Soda moved to Austin, TX, in 2009. Dr. Pepper distributes most of the products annually, selling 80% of the total soda sales of Big Red each year since 2007. The production headquarters is still in Waco, but the sales chain has changed quite a bit.

There are now various other Big Red Soda flavors as well. The 2007 acquisition opened the door for a means to create new and exciting branding opportunities and flavors. There is even a Big Red flavored beer that is sold by Islla St. Brewery in San Antonio. It was originally called Big Rojo and then later renamed Wild Rojo. Big Red floats are still really popular during fair days and other events in Texas as well, so you will be likely to encounter various creative ways that this product is used for events and on menus throughout Texas.

Texans are still mourning the loss of Dublin Big Red, which was made as an Imperial Cane Sugar version of Big Red Soda. There are some bottles on eBay from time to time if you are really desperate to try them. It might be a shadow of its former self, however. Some Texans call Big Red “East Side Champagne”, and you will see this drink everywhere at events, house parties, and more when you visit Texas.

Many people also use Big Red Soda to attract deer when hunting or for baking and curing. Some people even swear by it as a hangover cure. There are so many ways that Big Red has become a well-known cure-all in Texas, while many people in other states are not even aware that it exists. 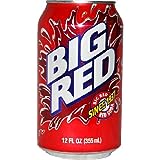 There are some retired flavors as well:

Not every location offers the full range of flavors since some of these are only sold in specific bottling companies’ supply regions. You might need to do some digging to find some of the more unique varieties in your area. The varieties of Big Red Soda are not actually red in color, so you will find that the full range of colorful soda options is used for these unique varieties of the original formula. Big Pineapple is a neon yellow color, and Big Blue is definitely bright blue. The labels offer the same marketing format as the original soda, however, with different and colorful backgrounds that match the flavor in question.

This is the formula for the original soda and not the spin-off varieties.

This is a fairly simple recipe for a soda, and this is one of the things that consumers love about this product.

An ad targeted at younger consumers:

A new commercial they just released:

What flavor is Big Red Soda?

Big Red Soda is made of citrus oils blended with the vanilla of a traditional cream soda.

What is Big Red Soda?

Big Red is produced and distributed by various independent bottlers including Keurig Dr Pepper, CCE, and Pepsi Bottling Group under license from Big Red, Inc., based in Austin, Texas.