If you love chewy little fruit candies that are bite-sized you probably always grab a box of DOTS candy at the store. This is one of the most addictive and delicious fruity candy treats on the market today and many people will tell you that they have loved this candy since childhood.

DOTS are a staple of the bite-sized candy market that came about during the 1940s and they have never stopped being popular since they were first sold in the US. This is a great classic candy that everyone enjoys and the really satisfying texture and taste of these candies have never needed improvement. The DOTS candies that you buy today will be just like the ones that your parents enjoyed because there has never been any need to change anything about this delightful candy.

DOTS were originally called Mason DOTS and were introduced to the market in 1945. The Mason company sold DOTS to Tootsie Roll in 1972 not long after they trademarked the name. Tootsie Roll actually bought out the Mason company that was a division of the Candy Corporation of America at the time.

These candies are still made by Tootsie Rolls Industries today. This candy has always been considered a gum drop by the company but most people would associate them more with the fruity and chewy candies that are sold in other markets. These candies do not have the sugary exterior of a regular gum drop and are really only like gum drops in shape.

Tootsie Roll Industries touts that these little candies are the #1 selling gumdrop in America and further claims that they have been #1 since their release in 1945. The company makes more than 4 billion DOTS each year which does seem to indicate that most people would prefer these candy treats to other fruity and chewy candy options.

This is a vegan candy and it is made in a gluten-free, nut-free and kosher environment. The candy is primarily sold in the classic cherry, lemon, lime, orange, and strawberry flavors today. These candies come in mixed assortment boxes that include all of the flavors. More recently there has been sour DOTS added to the lineup as well as Tropical DOTS and Yogurt DOTS.

Crows were one of the original gumdrop candies that the Mason company made. These are also considered to be DOTS but they are black licorice flavored. There is an urban myth that these candies were misnamed as Black Crows when a typing error happened at the company. The myth says that the candies were supposed to be called Black Rose candies but the error sent them to market with the name Crows. This is not true but the story has persisted and is the primary reason that many people know that Crows even exist.

One of the interesting things that most people do not know about licorice candies is that they were not originally made to be eaten as a treat. Licorice was used as a medicinal item for generations prior to the 1900s. Early candy-style items that were made with licorice flavoring were likely sold for use as a medicine and not to be sold as candy treats. This is part of why licorice was one of the first candy flavor profiles that was made by many companies at this time. Many people are also not aware that the gumdrop and other small bite-sized candies were originally made to help deliver medicines and not to be enjoyed as candies.

Crows were actually the first gumdrop candy that the Mason company made and they are still a fan favorite even if they are not as popular as the fruit-flavored DOTS candies. Today the most commonly sold variety of this candy is the classic fruit variety box and most DOTS candy lovers would not have it any other way.

DOTS are not candies that age very well and you will end up with very hard and crunchy candies if you do not consume them within a reasonable time after you buy them. This is true if you open them up and then try to come back to them about a week later. Just know that your DOTS candy are best consumed fairly soon after you buy them.

Most people would say that these candies are so good for snacking that they never keep them around for so long without finishing them, but this is one small buyer beware item about this kind of candy. You would have the same experience with gum drops as well or any other gelatin candy that contains some starch.

DOTS candy could probably prevent some of these issues if they were not just dropped right into the cardboard boxes that they are sold in, but the classic packaging methods have not been changed at this time. Maybe in future some interior wrapper will be added to give the DOTS candy inside the boxes a little longer shelf life. It is likely that the company assumes that most people will not be able to resist the little gumdrop treats they have purchased and so there is no need for a long-term solution for freshness.

DOTS candy have always been a classic movie theater candy and continue to be offered at most movie theaters as part of the lineup of candy options you can add to your popcorn and soda. This is probably where most of us had our first DOTS candies and you can still enjoy this fun experience today! 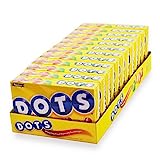 You can also buy DOTS at Old Time Candy by clicking the image below.

DOTS candy are sold all year in the classic fruit flavors but there are other varieties that are sold at some times of the year as well. Yogurt DOTS are actually made with yogurt in the mix but the yogurt flavor is not really a clear part of the taste profile. Many people claim that these DOTS taste more like candy and cream of some sort combined.

The boxes for this unique variety of the DOTS candy lineup show the slightly cloudy DOTS with fruity-colored tops on them in the foreground. This has not been one of the most popular of the varieties of DOTS out there but there are some people who really enjoy them.

From the Tootsie Roll Site:

The company does note that the product does contain a bioengineered food ingredient from US crops. The yogurt version proclaims to include some yogurt ingredients in the mix that makes the candies as well.

This is one of those classic candies that has always been sold with basically the same style of box. The boxes have been yellow with images of the candy on the front for years and years. The candy name is outlined by circles in blue that show white letters. The ones that were sold with the Mason DOTS name on them had black circles behind the white lettering of the candy name.

The Tropical variety shows the DOTS candies in the sand and the background of the logo is the blue sky at the beach. The logo for the candy name is the same and the word “tropical” is shown above the logo in green lettering. The seasonal varieties get really fun box designs to enjoy. The Bats version shows bats and the moon behind the candy logo and the DOTS are shown with cartoon bat wings on them in the foreground.

All of the varieties of DOTS candy have the same general box design which makes them very recognizable even if you are looking at a seasonal version of the candy.

An ad for mason DOTS candy: