Pepsi Max might sound like it would be an extra strong, maximum sweet, super charged beverage, but while some of that is true (depending on what country you’re in when you’re drinking in) Pepsi Max is actually a sugar-free cola designed as an alternative to regular Pepsi. Pepsi Max is also known as Pepsi Black in some countries.

In America, the country where Pepsi was born and the nation with the highest consumption of carbonated soda, Pepsi Max was not known at all until years after its debut. While it was introduced in 1993 in other parts of the world, it finally became available in the U.S. in 2007, about 14 years after it was launched in Australia, the U.K. and Italy. It was also called Diet Pepsi Max.

As with many sodas and brands, Pepsi created a multitude of varieties and flavors. Something that’s particularly noteworthy about Pepsi Max is that it had different formulas in different countries. So while the name was the same (eventually), what was in the can or bottle might be quite different.

In North America, Pepsi Max was called Diet Pepsi Max when it hit the market and was infused with ginseng and sweetened with aspartame. It also contained just about double the caffeine found in most other drinks, making it a direct competitor with energy drinks that were gaining popularity around the world. Pepsi Max had 46 milligrams of caffeine per 8 ounces, where regular Diet Pepsi and similar beverages clock in at 24 milligrams per 8-ounce serving. The “Diet” part of the name was dropped in 2009, two years after it hit the U.S. market and just a year after it became available in Canada.

In addition to having different names and different formulas, Pepsi Max also came in different flavors, some of which weren’t flavors typically associated with colas.

Pepsi Max was aimed at young consumers, mainly male, who would theoretically be attracted to an edgy beverage that would be attracted to a cola that was more intense and cooler than the average soda on the market.

These efforts were successful when the brand launched, and they continued to drive sales in Europe and later in the U.S. for the first decade or so of the brand. But eventually, consumers started to lose interest in Pepsi Max. New lines of beverages were dominating the market, as was a familiar foe: Coca-Cola.

In the U.K., Pepsi executives realized they needed a new approach to marketing and advertising. The answer: The digital world, more specifically YouTube. Research showed that the customer for Pepsi Max, more specifically men aged 18 to 34, were spending more time online watching content on YouTube than they were watching traditional television.

The executives also realized that previous advertising campaigns weren’t selling the core message of Pepsi Max, that it tasted the same as “regular” cola but didn’t have the sugar or carbs that came with Pepsi or Coke. Their target market was missing the main selling point of the product.

The answer? Multiple campaigns that embraced the impossible – that a drink could taste that great without the sugar. They launched a campaign feature a well-known magician and focused on the magic of Pepsi Max. The campaign led to the creation of  Pepsi Max’s “Unbelievable” YouTube channel, which directly targeted the younger demographic that was key to Pepsi Max’s success.

The “Unbelievable” channel featured content that lit the digital space on fire. One video that went viral featured a stuntman performing the first human loop-the-loop and finished with the tagline: “Pepsi Max, Taste. No Sugar. Unbelievable.” The Unbelievable campaign also featured YouTube content creators’ own unbelievable talents, making Pepsi Max a part of the community.

The Pepsi Max brand continues to harness and optimize digital marketing, capitalizing on cultural and commercial shifts to remain current and cutting edge.

Though Pepsi Max has a bit of a roller coaster experience, with its delay to the American market to its varied positioning in Europe, its parent company remains one of the biggest and most successful beverage and snack companies in the world.

PepsiCo as we know it now was formed in 1965 when a previous iteration of the company, the Pepsi-Cola Company, merged with Frito-Lay. PepsiCo has expanded over nearly six decades to encompass several hundred brands, factories and facilities in countries on nearly every continent in and more than 200 countries. The company’s net revenue stands at over $100 billion. Pepsi Max and all of it’s flavors are quite literally one drop in a very profitable bucket.

Some of the big brands that contribute to the bottom line are quite familiar across the globe. A few with revenues over more than $1 billion on their own include the regular Pepsi cola, Diet Pepsi (American version of Pepsi Max for a number of years), Mountain Dew, Lay’s, Tostitos and Fritos.

One of the biggest battles for domination in the world of consumable products is so iconic, it even has its own name: The Cola Wars.

Pepsi and Coca-Cola have bee.” fighting for the hearts and mouths of soda drinkers for decades. The competition has become so intense and so ingrained in culture, that individuals willingly and freely identify themselves by whether they are a “Pepsi person” or a “Coke person.”

The Cola Wars were an underlying factor for many years, but they escalated in the 1970s and 1980s, years before Pepsi Max would enter the fray.

The two companies chose different tactics to reach the public. Coca-Cola tried to tap into the warm, fuzzy feelings and family and times gone by. The company’s ad campaigns used beloved characters, like the iconic Coca-Cola polar bear and the even more iconic warm, fuzzy Santa Clause, who was a centerpiece of their winter holiday marketing campaigns.

Over at PepsiCo, the approach was energetic and fresh, using partnerships with sports figures, cultural icons, big games like the Super Bowl, and iconic musicians and celebrities. Pepsi Max fit right into that approach with its cutting-edge, high-octane advertising campaigns.

One of Pepsi Co.’s greatest successes was the Pepsi Challenge, which asked ordinary people to participate in a taste-test. The participants were blindfolded and were give samples of Pepsi and Coke. They were asked to pick their favorite. Since the challenge was issued by Pepsi, it should come as no surprise that the ads featured an overwhelming number of Pepsi winners.

When the same type of taste-test was conducted by impartial researchers, studies found that most people didn’t have a strong preference. They liked both the drinks.

Ultimately, even though the Pepsi Challenge may have been a victory for the Pepsi brand, and Pepsi Max by association, The Cola Wars have been good for both companies, keeping the two mammoths in the beverage industry top-of-mind for consumers all over the world. 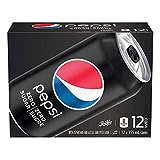 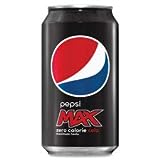 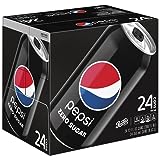 What is Pepsi Max?

Pepsi Max is a sugar-free cola designed as an alternative to regular Pepsi. Pepsi Max is also known as Pepsi Black in some countries.