It’s a delicious cinnamon graham, it’s a cereal, and it’s absolutely flavorful and fun! Golden Grahams are made by General Mills and they are one of the best cereals ever created in our humble opinion.

If you like graham crackers, you will be quite pleased with this cereal delight that takes the fun and flavor of graham crackers and creates a breakfast cereal for kids and adults alike!

Golden Grahams was originally presented by a brand known as Cereal Partners. Cereal Partners was always part of Nestle but eventually became General Mills. This cereal was created with little squares that are just right for bite-sized enjoyment.

The squares are actually made with whole wheat and corn, which is interesting when you consider the flavor of the squares. Those squares taste perfectly like brown sugar and a touch of honey. The flavor has always been comparable to cinnamon graham crackers as the closest comparison.

In fact, you might have seen tasty snack mixes that can be made at home to include Golden Grahams, mini marshmallows, and chocolate chips. It’s like a S’mores trail mix that is both fun and tasty but also far less messy than a regular S’more.

This cereal first came out to the world in 1976. It had several popular TV commercials in its early years and was sold heavily in the US, as well as both Canada and Europe. The brands are different in these countries and still held by Cereal Partners outside of the US and Canada.

General Mills is the brand that US and Canadian citizens will find the cereal in. Sadly, there are rumors that it was actually discontinued in Europe but we are unable to verify that for certain. There seems to be some history of it having been discontinued at some point but then it coming back into production so the details are just a little bit unclear.

One of the cool things about this particular cereal is that it is made with 11 grams of whole grain per serving, which is pretty phenomenal compared to other “sugary” cereals. In addition, the brand also does not add any high fructose corn syrup or artificial colors and flavors either.

It’s a fairly nutritious cereal that could definitely be way worse in terms of unhealthy ingredients. We will talk a little bit more about nutrition later in this guide.

Golden Grahams found their way to TV almost as quickly as it was released. They had a TV commercial the same year. The commercial sported a fun jingle that was to the tune of a song named “Oh, Dem Golden Slippers”. That song was written by James Bland.

The company used that as inspiration for their commercial song. At some point, General Mills also produced cereal bars that were a spinoff of the Golden Grahams cereal. And we already discussed that homemade snack mix that is similar to S’mores but not as messy.

When Was Golden Grahams Invented?

Golden Grahams first came out in 1976. It is part of a cereal company that was originally Cereal Partners outside of the United States. Here, we know that company as General Mills but the Cereal Partners company is owned by Nestle. Unfortunately, it seems as though Golden Graham was discontinued in the UK.

However, this cereal is still alive and well in the US and remains popular. It stands out because it is made with healthier ingredients than some cereals out there but still has delicious flavor and is really fun. You can make all sorts of different treats from this cereal.

Golden Grahams was made to be almost like a cinnamon graham cracker but cut into tiny bite-sized square that you add your milk to and enjoy for breakfast.

How Did Golden Grahams Get its Name?

While we don’t have any special stories to tell on this delightful cereal name, the name is fitting of what the cereal actually is. 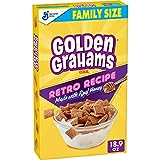 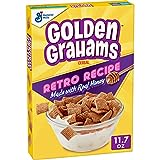 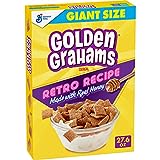 The most notable thing about this cereal is that they gave it great flour while using whole wheat and corn as the primary ingredients. It’s certainly not perfect but so many cereals don’t even try to incorporate these nutritional ingredients so it’s refreshing to see the foundation behind the cereal.

The other noteworthy part of the ingredients is that they don’t add artificial flavors, colors, or ingredients of any kind.

In addition, you will find iron, zinc, and calcium carbonate in the cereal to add to the quality of nutrition.

While we’re on the subject of Golden Grahams, we wanted to spend just a little bit of time talking about all of the fun and flavorful things you can make with this cereal. We mentioned earlier the snack mix that is like S’mores in a bag. For this particular snack mix, it’s just dry Golden Grahams, chocolate chips, and mini marshmallows all tossed together.

However, there are a ton of other ideas out there so let’s discuss those.

You can find recipes like these and several other tasty treats online. A quick search will bring you a wide selection of recipes for you to pick out what sounds good to you and give it a try. Don’t forget to let us know your favorites so we can give them a try!

In the United States and Canada, Golden Grahams are easy to find. It’s easy to locate at just about any store that carries a variety of cereal options. Just head to the cereal aisle at the grocery store of your choice and look to see what they have for you.

You can also find Golden Grahams online at sources like Amazon and Walmart specifically. In more recent years it was discontinued in the UK. While you still might be able to find it in that area, it most likely won’t be exactly the same, aside from maybe finding some straggling boxes still in stock here and there.