If you live in the US, you have probably had Chex Mix a time or two. This is a snack mix that is very familiar to anyone in the United States, and today there are various different flavors of this product that you can choose from to satisfy your snacking needs. Chex Mix is clearly associated with parties and sharing time with family during the holidays, but this product is also sold in travel or snack-sized bags as well.

You can also make your own Chex Mix using seasonings that are also sold by General Mills. Many people like to make their own unique snack mixes at home that are then finished with the recipe on the snack mix seasoning bag. This is a multi-faceted product and one that delights kids and adults alike all year long.

Chex Mix was actually a spinoff product from Wheat Chex and Rice Chex cereals. These products were made by Ralston Purina at the time. When a Chex Party Mix recipe was included in Life Magazine in 1952, this popularized the idea of making your own Chex Mix at home using the two kinds of cereal. This was originally an entirely homemade product that kids asked their moms to make for them when friends came over to visit.

Some people say that the original recipe for something like Chex Mix was offered on boxes of Chex cereal from the very beginning of the time that the cereal product was offered for sale. This might be an urban myth since there are no cereal boxes left to check for this recipe, and this might not have been done with any consistency at the time, either. Older products can sometimes be connected with common uses for the product in question, which can lead to rumors like this that might not be true.

Chex Cereal, on its own, was a new invention that was made just with kids and easy breakfast in mind. The post-Depression era was focused on snacks and foods that could be affordable to most families, and that would offer a lot of nutritional value to adults and kids alike.

Breakfast cereals have continued to be made to be fortified with various vitamins and other kinds of additives that are intended to make them nutrient dense. The concept of a meal that could make sure that you did not go hungry all day long was key during this period when so many people had known starvation and had been scared that this would be their reality every day for the rest of their lives.

While there is no pressure on cereal and snack companies to make complete meal products these days, there is still a focus on products that offer a sense of nutritional value and fun at the same time. As more and more families have two parents in the home who work, cereal and other quick breakfast foods that can be made by kids on their own continue to be important to the breakfast market.

Chex Cereal has enjoyed added popularity by being useful for snacking as well. The companies that have owned this cereal product over the years have made the most of the dual marketing potential of this cereal, leading to the special place that Chex occupies as both a cereal and a snack item.

By 1958, Corn Chex was added to the snack mix recipe that was offered on boxes of Chex cereal. There were no prepackaged varieties of this snack mix on offer until 1985, which seems surprising from the perspective of modern snackers. Purina again was the owner of the product when the prepackaged snack was first sold, and it was a big hit. After all, Chex Mix was really great to have on hand for parties and when friends came over, but it did take some time to make. Imagine being able to finally just buy it premade at the store!

The Original Chex Party Mix is the actual recipe for homemade Chex Mix. This is what is meant when someone refers to the Original Chex Mix, but for those who are not as familiar with the history of Chex Mix as a snack, this might get confusing. There is no version of the snack mix that is sold premade that is called this.

This recipe is offered today on the seasoning packets that you can buy to make your own Chex Mix, as well as the boxes of Chex cereal. The company also offers the recipe online when you head to the Chex product pages. Most people have made Chex Mix at one time or another in their life, and this is still one of the most popular snack mixes to make at home.

The ingredients for the seasonings were shifted slowly over time, and there were also changes to the kinds of snacks that were thrown in with the Chex cereal. There really is no wrong way to make your own Chex Mix, and all of these versions of the snack will seem familiar to you, even if there are some little differences in their flavors or the things that are included with the cereal in the mix.

By the 1980s and 1990s, Charline Brown and the “Peanuts” were associated with advertising for the Chex Mix product that you could buy pre-mixed. This helped to make kids interested in the product, and it was often associated with holidays like Christmas or even Thanksgiving. This was a clever way to get kids to ask their parents to please get them this little treat, and it also made Chex Mix seem really fun and exciting to kids, just like the homemade version of the treat was.

Today, General Mills sells a wide array of different Chex Mixes that you can buy in many different sizes of bags. There are party-size as well as snacking-size bags that are offered for sale in grocery stores and gas stations, and more all around the US. General Mills took over the product in 1996 and added many varieties of premade mixes to the market. This was fortunate timing as well since the snack food craze of the 90s was the ideal time for unique and flavorful snacks that were fun to eat.

Chex Mix that is not made at home often includes things like pretzel sticks, Wheat, Corn, and Rice Chex, and other added items like chips and even little fish crackers. The various varieties of the products can include different kinds of snacks, which makes certain kinds of Chex Mix more fun to eat for some people than others. At the heart of the Chex Mix product is the sense of fun that you get from eating the snack, and even the bagged mixes offer this sense of whimsy and fun. For those who made this snacking mix with their moms for years, this is like pushing the easy button on the traditional snack. 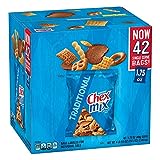 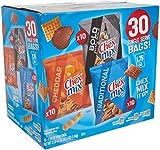 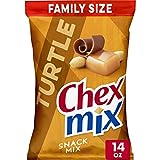 There are still a wide array of Chex Mix snacking options that you can choose to enjoy when you want to have this kind of salty snack. You will be able to find many of them for sale in grocery stores, but some of the salty and sweet products you might need to order online in order to get to give them a try.

From the Chex Mix page on the General Mills website:

This is the basic product and there might be ingredient differences in the other varieties of Chex Mix that are sold with different kinds of snacks included in them and different flavorings added to them.

What are the brown things in Chex Mix?

The brown things in Chex Mix are Bagel chips.

What is in Chex Mix?

In Chex Mix there is corn Chex, wheat Chex, pretzels, rye chips and mini breadsticks combined with a unique seasoning blend for a one-of-a-kind snack.

When was Chex Mix invented?

The recipe was created by the Ralston-Purina Company in the early 1950s to move boxes of its signature cereals Wheat Chex and Rice Chex.

Chex Mix is made by General Mills.