Astro Pops came onto the snack food market following the rise of interest in space due to the race to the moon in the 60s. These are classic candies that have a lot to say about what was important and exciting to adults and kids alike during the 1960s. Not everyone will remember these classic candies and they are no longer sold today in their original model, but they are a classic treat that is connected with a lot of interesting world events and social movements at the time that they were first made.

This is a unique candy that is one of the first rainbow pops that was ever made and their unique shape is really interesting as well. The 50s and 60s were a time of experimentation with both the shapes and colors of snack foods, as well as being a time that was devoted to a lot of creativity with the design process and marketing of snacks. Snack foods were a relatively new concept at this time and many novel items came out of this period that has led to the snack that we think of as commonplace today.

Astro Pops were first sold in 1963. Two rocket scientists who were working for the space program in El Segundo, California both quit their jobs to create the Astro Pop. This treat was intended to mimic the appearance of a three-stage rocker. The machines that they used to create and wrap the treats were made by hand and the two men created a unique method of wrapping the candy that led to the unique smoothness of the exterior finish.

This process used a wrapper that was made to allow the hot candy to be poured right into it. The paper stick was then added and the bottom of the pop was capped with a layer of wax. This was a great way to make the treat look like a rocket with smooth sides and since the Space Race was in full force, this was a great way to market this candy.

The other benefit of pouring the candy right into the wrapper was that it prevented bubbles and imperfections in the candy. Most hard candies were made and then heated and reformed at this time. This led to imperfections and bubbles that were unsightly or might lead to the candy breaking when it was being eaten. This was the main goal of making sure that the design process was crafted carefully and handled ably by the unique machines that the original makers created.

The Nellson Candy Company sold the candy to Spangler Candy Company in 1987. The flavors that were being sold at this time were cherry, passionfruit, and pineapple. When Spangler picked up the candy, they added a banana split and caramel apple to the lineup. In 1997, the company along with 7-Eleven were sued by a Skagit County couple in Washington state. They claimed that their son had been injured by one of the treats.

By the 2000s, Spangler felt that they needed to change the shape of the treat to be sure that they were making a safer candy for kids to eat. The 60s candy shape was reversed with the stick at the top of the pop rather than at the base. This was also felt to be a choice that would make the flavor more enjoyable as you would be licking the larger part of the pop when you were eating it.

This shape change was not a success and the candy was discontinued in 2004. In 2010, Ellia Kassoff bought the brand. This merged the candy into Leaf Brands, LLC. Leaf has expanded the brand to include Astro Pop Asteroids which are bite-sized. Astro Pops Sodas have also been added to the brand. The company owns global rights to the trademark as well as three years of royalty payments and the original manufacturing machines were sold for scrap.

Leaf has reinvented the machines that are needed for this production process so that the company can make the treats but with a new twist. Leaf has been responsible for Jolly Ranchers, Milk Duds, and Whoppers in the past, so they are experts at unique candy shapes and designs.

Astro Pops have always had and continue to have, 60s era-inspired wrappers and promotional materials that are used to create displays. Large bubble-style font, as well as bright colors and simple renderings of the product on the promotional stands, make these candies really stand out in a sea of more modern advertising designs.

The circular and rounded design of all of the lettering and design notes give you the feeling that the candy has walked right out of the 60s and into stores. The simple display designs are typically cardboard boxes that stand up the pops with their handles end up in the air. The pointy end is inserted into the box and the wider end is at the top.

This was a classic candy display design for many candies when the Astro Pop was first made and you will not see it very often anymore. This means that this candy stands out amongst a sea of more modern treats these days. This has become a successful portion of the advertising and promotional methods of the brand and the older styling work perfectly for the needs of the brand in today’s market.

The most durable and long-term slogan for the Astro Pop has been, “longest-lasting lollipop on Earth”. This is definitely the case for most people who enjoy this treat as the suckers are quite large and are meant not to be chewed up or broken into pieces. Candy enjoyment has run more toward small pieces that can be eaten as snack-size bites, but these large lollipops are still a success with those who love sucking on a candy item over the course of an hour or more. There are few candies that are made to last this long and you will be thrilled if this is your favorite kind of candy to enjoy.

Astro pops are hard enough that you have to suck the candy throughout the eating process. You cannot crunch it or break it up as you eat it. They can also get a bit sharp at the end as it is being eaten. This is part of what led to the supposed injury that caused the company to be sued for the injury of a child. Despite the change to reverse the shape of the pop, the safety factor was not as important in the long run as the enjoyment of the shape.

Most people will try to eat the candy carefully and avoid the sharp point but it can be a little tricky to keep from getting stabbed by the pointy end. The shape of the candy has not held up as well to the modern candy market and some people will still avoid this shape of candy because of the commitment to the eating method that is needed to enjoy it. You will be getting a lot of bang for your buck, however, as this lollipop lasts far longer than any other on the market. 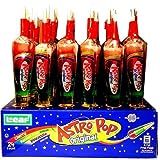 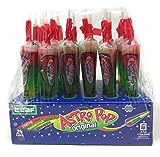 You can also buy Astro Pops at Old Time Candy by clicking the image below.

The recipe has not changed much over the years and the only alterations from these basic ingredients are based on the unique flavors that are offered in the newer versions of the candy.

These are simple components and the rest of the differences between varieties are just related to flavoring that is added for the other special varieties. There will be some color changes as well for certain varieties that have been added to the lineup of brand products.

There seems to be just one ad for the classic candy that was run on TV. It was a 30-second spot and was shown just before the change the unpopular new shape by Spangler: