Oh’s cereal hit American grocery shelves in 1980, a latecomer to the breakfast cereal competition when compared to some of the iconic cereals that debuted a half-century earlier. And Oh’s! in their original conception didn’t last particularly long, either.

In 1989, Quaker began trying a variety of other flavors, including “Apple Cinnamon Oh!s” “Apple Oh!s”, and “Fruitangy Oh!s.” But in 2014, Quaker Oats gave up on Oh!s and sold the line to Post, one of the leading cereal manufacturers.

In early 2018, Post came up with a new recipe for Oh’s, calling it simply “Honey Oh!s” and redesigning the box. The new formula removed some key ingredients, including graham flour, coconut oil, brown sugar and oats.

One of the main claims to fame for Oh!s cereal was that, unlike other round cereals on the market, Oh’s had tasty treats in the middle. This was a theme for many of the commercials for Oh!s, and their main slogan was, “There’s something in the middle of Oh!s cereal that makes people say ‘Oh!’” What was in the middle?

In the original flavor, the center was filled with graham cracker bits, crispy rice and honey.

Commercials for Oh!s cereal showed men, women and children taking bites of the cereal and saying, “Oh!” in surprise. Unlike many of its competitors, Oh!s cereal didn’t have a mascot, cartoon or other gimmick. Just the distinction of a yummy center that would make you go, “Oh!”

When Oh!s first came out, Quaker Oats used and exclamation point in place of an apostrophe between the “h” and “s” in the name. Some would argue that neither punctuation mark was really necessary.

In later versions, Oh!s would become Oh’s!, now with the apostrophe between “h” and “s” and the excited exclamation point at the end. Still later, all punctuation was eliminated, and Oh!s and Oh’s! became simply Ohs.

The various flavor changes made by Quaker Oats and then Post were even more bothersome to original Oh!s lovers than the way the name was written. A change.org petition implores Post to return to the good old days, when the Oh!s were thicker and the centers were packed with goodness.

The petition, which is signed by “Oh’s Nation,” has nearly 500 signatures (and counting.)

A few of the key arguments in the petition:

The new version “is no longer the miracle cereal that so many of us have come to love.”

Only about 10 percent of the round cereal bits in the current have ingredients in the middle. A serious problem to Oh’s Nation. “You clearly recognize this as it is the cereal’s very motto and every single Oh pictured on the packaging has stuff in the center.”

The Oh’s have lost their originality and texture. The new ones are perfectly round, whereas the originals had cracks and crevices were crunchy bits could gather.

While the petition focuses primarily on flavor, the Oh’s Nation also cares about punctuation: “Please bring back the apostrophe in the name “Oh’s”. What’s wrong with a little punctuation at breakfast? The current name, Ohs, is a commonly used acronym for Occupational Health & Safety.”

Quaker Oats, the first maker of Oh’s breakfast cereal, was founded in 1901, when four oat mills combined into one mega-company. In 1908, Quaker Oats introduced the first in a series of cookie recipes on their oatmeal box, which, by the way, was not the cylinder we know today.

That change in packaging happened in 1915, but the oatmeal product remained unchanged. In the same year, Quaker became the first cereal company to offer an incentive for buying a product.

For just $1 and a cutout picture of the “Quaker Man,” you could get a double boiler to make perfect oatmeal in your kitchen. While that made quite an impression, the company was still decades away from surprising customers with the center-filled Oh’s cold cereal.

Getting closer to what would eventually become entry into the convenience food market with projects like Oh’s, Quaker introduced “Quaker Quick Oats’ in the 1920s. In keeping with the notion that customers liked giveaways, the company offered a crystal radio kit that used the iconic cylindrical package.

A story from Quaker’s past (1946-1953) might make you say “Oh!” for a less pleasant reason. Researchers from the company – along with scientists from MIT and Harvard universities — allegedly carried out experiments to see how minerals from breakfast cereals were metabolized in the human body.

To do this, they apparently invited parents of developmentally disabled children to sign their kids up for “Science Club.” The story goes that parents were told that one of the special privileges of being in the club was that the children would be fed a diet high in nutrients. What they got was food that contained radioactive calcium and iron. The point of the research was apparently to collect information for future advertising campaigns. Quaker was sued over this research, and the case was settled in 1997,

Post Cereals (now Post Consumer Brands) came in to the picture for Oh’s Cereal in 2014. But Post had been in business long before that. It was founded in 1895 (several years before Quaker Oats came to be). The founder was C.W. Post, who at one time was a patient in a sanitarium run by Dr. John Harvey Kellogg, who along with his brother, developed a corn flake cereal that was served to patients, including Post himself. As you may guess, the Kelloggs went on to become Kellogg’s, one of the top cereal companies in the world. Again, all this happened long before Oh’s were even a flitter of an idea.

Post made its first dry cereal in 1897. He called his mix of crunchy wheat and barley “Grape Nuts.” He also made a product some would say was fashioned after the Kellogg’s version of corn flakes, which he eventually named “Post Toasties.”

While C.W. Post can be credited for putting the company on the map, it was his daughter, Marjorie, who kept things going for years after her father died, apparently of a self-inflicted gunshot wound. The company really began to grown in the 1920’s, when it’s leadership, including E.F. Hutton, focused on acquisitions and grocery products. One big purchase: the Jell-O (not Oh!) company. The biggest acquisition for Post was General Mills and its founder’s idea for frozen foods and the icebox in which to store them.

Even as the frozen food industry was growing, breakfast cereal remained an important product in the company, and Oh’s cereal was one in a powerful lineup. In 2011, Post became a brand of its own again. 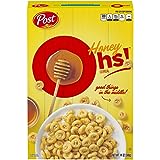 Post brands that have been discontinued include some well-known products and some – let’s say interestingly named varieties.

Oh’s breakfast cereal can be used as a key ingredient for delicious desserts. For example, home cooks swear by a recipe that combines the cereal with marshmallows, butter, vanilla, peanut butter and peanuts to make Oh!s cereal bars. Another version is even simpler and uses just the cereal, marshmallows and peanut butter for gooey delicious Peanut Butter Oh’s Squares.

One common combo recipe: Use Oh’s cereal in addition to Chex cereals in that iconic Chex Mix recipe so popular in the 1970s or the sweet version that became popular in the past decade.