If you have ever tasted Corn Pops, you probably remember the satisfying and distinctive taste of this crunchy snack. When you bite into it, the sweet flavor bursts and opens up the taste receptors. After chewing for a while, the corn’s taste appears to be perfectly balanced by sweetness.

Corn Pops have become a favorite treat of many people all around the world and are an inseparable part of breakfast in many households. However, it is interesting to see where it all started and who created this delicious breakfast cereal.

Kellogg’s Corn Pops has been on the market since the 1950s. Not surprisingly, the brand has managed to fulfill its promise to people. According to the company’s owners, their product would “be available at your favorite food store.” As a result, Kellogg’s Corn Pops got ranked among the 15 best-selling ready-to-go brands worldwide.

Corn Pops were actually the first product that Kellog’s released after the Second World War. Believe it or not, the development process took as many as 14 years. During that time, a new method of manufacturing was used, and the brand even developed an innovative coating method. The product was tested on 1,000 families and children and came out with great success. Therefore, the debut of the Corn Pops was done at West Coast Launch.

Those puffed grains are made from milled corn. The main ingredients include wheat starch, sugar, salt, corn syrup, annatto extract color, and 2% molasses. This delicious product contains B1, B2, B6, and B12 vitamins as well as the D3 vitamin and folic acid. It will also give you reduced iron and niacinamide. Even though the product contains hydrogenated fats, it has the mark of being trans-fat-free. This is because the amount of trans fats in the serving is way less than 0,5 grams, which is the threshold.

So, not only does Corn Pops boost your energy in the morning, but it also provides essential vitamins and minerals for your and your children’s health. Corn Pops are usually eaten with milk. Many people also enjoy it as a snack. In addition to that, it is worth mentioning that this product is Kosher Certified.

Kellogg’s is one of the largest American cereal producers and makes ready-to-eat food products. This multinational food manufacturer managed to have its products marketed in more than 180 countries all around the world. The mission statement of the brand sounds very positive and promising: “Nourishing families so they can flourish and thrive.”

The headquarters of Kellogg’s company is located in Battle Creek, Michigan. The company was founded in the early 1900s by brothers W.K. Kellogg and John H. Kellogg. At first, it was called the Sanitas Food Company. Little did they know that they would have a long way to go.

The brothers managed to develop the method of making crunchy and flavored flakes. They used processed grain as the main ingredient. Their breakfast food soon became popular and was used to feed patients in Dr. Kellogg’s Battle Creek Sanitarium. Soon after their appearance, the cereals made it to the list of the most loved products.

In 1906, W.K. Kellog bought the company shares that belonged to his brother and formed a new company under the name of Battle Greek Toasted Corn Flake Company. The manufacturing process and techniques soon started to improve, and alongside, the cereal quality was increased.

One of the most important promotional decisions was made in 1945. Kellogg’s brand inserted the small prizes in the cereal boxes. The prizes included U.S. Army squadrons and comic characters that were popular back in the day. There were a total of 90 items in the collection. The promotional strategy was so successful that some major brands, such as General Mills, Malt-O-Meal, Nestle, Quaker Oats, and Post Foods, applied this idea to their products. The promotional strategy was pretty successful, and it played a huge role in the popularity and fame of the brand itself.

Another modification happened in 1922. This time, the brand started making the cereals alongside the cornflakes. The company kept growing and, in 1969, they acquired Salada Foods, which resulted in the addition of desserts to their products. One more great purchase was made in 1970 and 1977. This time, they acquired Pure Packed Food and Mrs. Smith’s Pie Company.

Today, the brand is a manufacturer of cereal and convenience foods. The headquarters of Kellogg’s company is located in Battle Creek, Michigan. The brand has its largest factory located in Greater Manchester, the United Kingdom. Surprisingly, Kellogg’s brand manager gets the Royal Warrant from Queen Elizabeth II and the Prince of Wales.

Changes In The Name

Kellogg’s described the Corn Pops Cereal as a “crunchy, sweetened popped-up corn cereal”. The sweet treat was introduced to the market in 1951. At first, it was called “Sugar Pops”, then the name was modified in 1978 to “Sugar Corn Pops”.

“Corn Pops” as we know it today, was named in 1984. Specifically, this most recent version was created with the common trend of the time in mind. Apparently, the cereal manufacturers took out the “sugar” from the names of their products because it did not sound healthy.

Another name change was implemented in 2006, and this time it was changed to simply “pops”. The new name did not come out with the expected results, and therefore, the manufacturer was forced to change it back to the “Corn Pops”. Because of those changes, the cereal can be called both “Pops” and “Corn Pops”.

At the beginning of the 21st century, the Corn Pops brand decided to generally focus on ready-to-eat cereal products. This included releasing convenience foods and snacks such as granola bars, crackers, and cookies. There were several additions made to Keggell’s Corn Pops brand product line, including the Kell Cinnamon Corn Pops, Kellogg’s all-Bran, Complete Bran Flakes, Rice Krispies, Variety Pak, and Raisin Bran.

The new Corn Pops product was introduced in 2007 and was called “chocolate Peanut Butter Pops”. This delicious treat comes in peanut butter and chocolate flavors and has the crispy texture of the cereal. This delicious treat is made with real peanut butter and chocolate. Corn Pops entered the United Kingdom market in 1933. However, for some reason, they were no longer available in 2004.

The American version of the Corn Pops comes with a few different features in comparison to others. It comes in a little different shape that is somewhat irregular and smooth and elliptical. In 2007, the US version of Corn Pops had coconut oil added as one of the ingredients.

The Canadian version of those puffed grains comes in a shape that is different from the American one. It has a uniform sphere and the surface has pores similar to the Kix. Despite having the same name and manufacturer, they taste pretty different. The same uniform sphere was also applied to the Corn Pops that were presented in the French market. In both cases, the cereal had a crunchier texture in comparison to the American Puffed grains.

The brand explains that the difference is caused by the ingredients that are used in the product because they are made with ingredients provided by the particular country. However, generally, the fat, protein, and cholesterol levels remain the same.

The problem of corn flake’s stickiness was caused by the method that was used in the manufacturing process. Unlike the American version, in Canada, the Corn Pops came with a plastic bag, which is now used for American Corn Pops too. 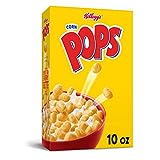 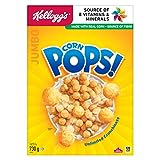 The Corn Pops brand product is marketed today in North America, Australia, Asia, Latin America, and Europe. Since its appearance on the market, the Corn Pops has been animated by the three characters, including Bella Yella, Poppy, and Sugar Pops Pete. They appeared in the different promotions of various products, starting with backpacks and ending with puzzle games. There was even a special edition product released in the year 2000 that was basketball-inspired.

The main advertising tagline for the British Corn Pops was “You can’t stop a corn popper from  popping more corn.” The corn pops were sponsors of the British boy band Take That on their tour held in the year 1994. The Corn Pops puffs had a different mascot over the years. including the famous Guy Madison, Andy Devine, Woody Woodpecker, Prairie Dog, Porcupine, and Sweet Toothasaur.

The Corn Pops brand came a long way and went through a lot of changes and difficulties. However, despite the obstacles, it managed to stick around and create a product line that would be loved by all. Corn Pops cereal has a sweet and crunchy texture that makes the perfect, light breakfast for anybody. It can be eaten with dairy or nut milk, or it can be eaten on its own straight from the box.

What could be a better start to the day if not the delicious puff grains that give energy and boost the mood?